Here's a working list of monsters for a D&D Companion supplement (a work in progress, so please feel free to comment upon monsters you think should/shouldn't be included): 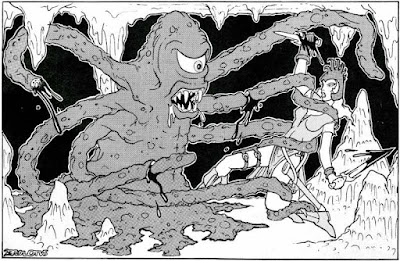 Illustration by Erol Otus, from the AD&D 1e Rogues Gallery (1980)

at December 04, 2022 No comments:
Email ThisBlogThis!Share to TwitterShare to FacebookShare to Pinterest
Labels: B/X

The monster section in the Moldvay Basic rulebook has 70 entries, while the Cook/Marsh Expert rulebook has 67, so a Companion supplement should include a comparable number.

The AD&D 1e Monster Manual introduced the concept of magic resistance, similar to spell immunity as described in the Companion Set rules/anti-magic effects in the Master Set rules. Illustration by Erol Otus, from the AD&D 1e Fiend Folio

All of the monsters in Monsters & Treasure are listed in B/X.

I would include most of these in a Companion supplement, except the druid (available in other sources), the metallic dragons (the brass dragon was included in Holmes), platinum "king" and chromatic "queen" dragon rulers (those in BECMI are different), giant tic (included in Holmes), and golems (B/X has its own versions).

I would include demons, which appear in the Immortals rules.  I would also include couatl, ki-rin, shedu, and su-monsters, as well as mind flayers (from The Strategic Review #1), but not brain moles, cerebral parasites, intellect devourers, or thought eaters (created to counter psionics).

The AD&D 1e Monster Manual collected all of the creatures in OD&D + supplements, most appearing in The Strategic Review + early editions of The Dragon, and included some new monsters, as well.

The Companion Set rules included some original monsters (mostly those from other planes), but also many creatures who appeared previously in the new monster section of various modules.

The D&D Master Set rules included many original monsters, in addition to some reskinned from OD&D (ie. the ixitxachitl as "devilfish"; and catoblepas as "nekrozon").

at December 03, 2022 4 comments:
Email ThisBlogThis!Share to TwitterShare to FacebookShare to Pinterest
Labels: B/X

"Part 5: The Encounter" should include rules for underwater movement and actions, including combat and spell casting. 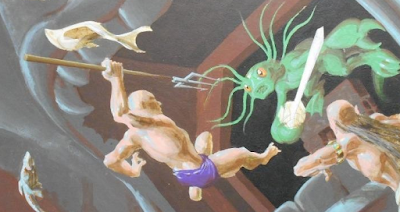 When determining encounter distances underwater, two factors need to be taken into account: sight and hearing.

Sighting enemies: To determine the distance at which approaching creatures are first seen, roll 3d6 and multiply by 10 to find the distance in feet.  If the number rolled exceeds the current visibility distance, the encountered creatures are seen only when they enter the range of visibility.

Unlike most normal fights, underwater combat almost always takes place in three dimensions.  Once the distance has been determined, the plane of attack needs to be considered.  This may involve attacks from above or below, as well as attacks from the back or sides, or even a combination of the two.  The diagram below is a handy way of determining the plane of attack: 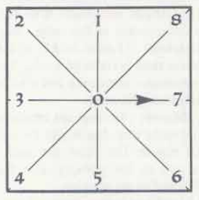 A normal person cannot move or fight as well underwater as he can on land.  He is -4 to hit with any weapon such as a sword or axe.  Missile weapons are only -1 on hit rolls, but they have only half their normal range.

It is impossible to speak clearly underwater.  Unless a cleric or magic-user has waterbreathing (either through the spell or a magic item), he cannot cast spells underwater.

Even if a cleric or magic-user can breathe underwater, some spells will have strange results or side effects underwater (as described in module X7 "The War Rafts of Kron")

The Greyhawk supplement introduced variable weapon damage for both man-sized as well as larger opponents, which could be included as a way to differentiate between the new weapon options, instead of using the Weapon Mastery system from the D&D Master Set.

The Cook/Marsh Expert rulebook describes a simple approach to striking (characters who engage in combat without a weapon will do 1-2 points of damage plus any strength adjustments for a successful attack).

A method for grappling/wrestling may be derived from Gary Gygax's Combat Example from The Strategic Review #2.  (Revised approaches to both striking and wrestling are presented in the D&D Companion rulebook, for those preferring the BECMI approach.)

Rules for jousting in D&D based on the system in Chainmail were described by Jon Pickens in The Dragon #17 (August, 1978).  (A simpler system is described in the D&D Companion rulebook.)

The Cook/Marsh Expert rulebook suggests using the Swords & Spells supplement for large scale battles.  Gary Spiegle's War Machine rules* are better, although I would not feel the need to reproduce them.

There are basic rules for sieges in Swords & Spells, based on Chainmail.  These appear to have been revised in the AD&D 1e Dungeon Masters Guide, although the Siege Machine rules in the D&D Master Set are more playable.

at November 27, 2022 No comments:
Email ThisBlogThis!Share to TwitterShare to FacebookShare to Pinterest
Labels: B/X

"Part 4: The Adventure" in Moldvay Basic describes encumbrance, (new equipment is introduced in Cook/Marsh Expert, for which values for encumbrance are not provided).

A Companion supplement should include the encumbrance of new ("optional") equipment, such as new types of armor, the heavy crossbow, bastard sword, and other weapons. 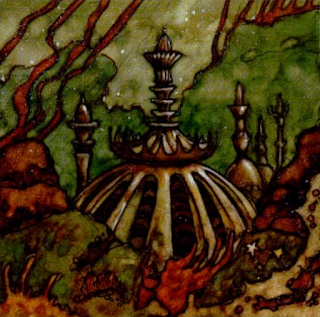 Module X7 has an Underwater Movement Table showing the speed characters may move underwater.  The table has a Sink/Rise column which shows how fast a character sinks or rises underwater.  If a fighter with plate mail, a sword, and a shield falls into the ocean, he sinks 20 feet per round because he has 660 coin weight of encumbrance.  If he removes his armor and shield, he rises 10 feet per round. 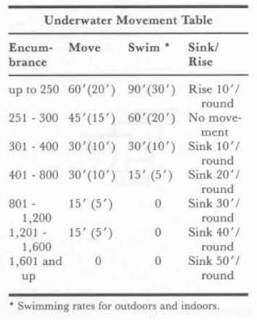 Underwater Movement Table, from X7 "The War Rafts of Kron" (1984) by Bruce Nesmith

Seeing underwater is more difficult than seeing above water.  Just under the surface of the water a person can see 500 feet with natural lighting.  For every 100 feet below the surface, the range of vision is reduced 50 feet.  A person 1,000 feet or more under water is in complete darkness.

Noises travel farther underwater than in the air.  All sounds should be much louder and a little distorted if characters are underwater.  Navigators quite often use sound instead of light for navigation underwater.

Normal ink smears underwater.  Normal documents and writings become indecipherable in two turns.  This includes maps, but not magical writings.  If the party wishes to map the areas they investigate underwater, they must use a different system of mapping.

An expanded table for giving experience points should also be included.

at November 26, 2022 No comments:
Email ThisBlogThis!Share to TwitterShare to FacebookShare to Pinterest
Labels: B/X

A D&D Companion supplement should include a complete list of magic-user and elf spells to level 9 (see also Cook/Marsh Expert: Magic-User and Elf Spells). 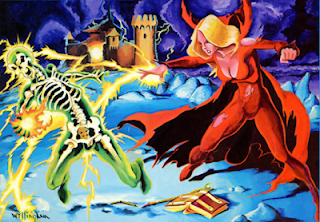 The Cook/Marsh rulebook includes complete lists to level 6.  Magic-user spells for levels 7-9 in the Mentzer Companion and Master Sets are listed, below:

I'm sorry to see "Limited Wish" and "Simulacrum" go, although many lower level spells from OD&D + Greyhawk were similarly excluded from B/X.

at November 20, 2022 2 comments:
Email ThisBlogThis!Share to TwitterShare to FacebookShare to Pinterest
Labels: B/X

A D&D Companion supplement should include a complete list of clerical spells to level 7 (see also Cook/Marsh Expert: Clerical Spells). 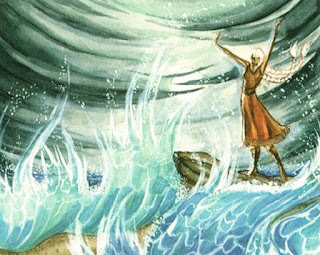 To the six spells listed in Cook/Marsh Expert, I would add "Cure Blindness" (from AD&D 1e/Mentzer Expert) and "Speak with Dead" (from Greyhawk/Mentzer Expert):

I would include the eight spells listed in Mentzer Expert/Companion:

"Control Weather", "Gate", and "Symbol" from Greyhawk are already magic-user spells, as is "Wish" from Mentzer Master (these could represent additional spells that may optionally be cast by a sufficiently high-level cleric).

"Wizardry" is a 7th level clerical spell from Mentzer Master, permitting clerics to use magic items normally usable only by magic-users, for a single turn.  Scrolls containing 1st or 2nd level magic-user spells may also be cast (which doesn't make the cut, in my opinion).