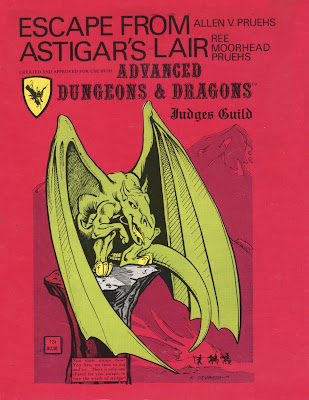 The scenario was designed for two players using druid and ranger pregens with a 60-minute time limit, in the vein of the earlier "Quest for the Fazzlewood" tournament dungeon.
Although the AD&D 1e DMs Guide wouldn't be available until Gen Con XII in August, 1979, the previous two AD&D volumes are required to run this adventure.*
*some of the monsters used are from the AD&D 1e Monster Manual, and the two pregens are statted as per the AD&D 1e Players Handbook:

tracking percentages also based on the AD&D ranger description Illustration by Kevin Siembieda, from "Escape from Astigar's Lair"

A system for critical hits and fumbles is also described (as in "The Dragon Crown").

Natural 20s result in double damage (for both players and monsters) and if a player rolls a natural 1, they must make a Dexterity check on a d20 or fumble (weapon takes 1 melee round to recover).

at June 26, 2021 2 comments:
Email ThisBlogThis!Share to TwitterShare to FacebookShare to Pinterest

"Quest for the Fazzlewood" was the tournament dungeon for the Metro Detroit Gamers' WinterCon VII Gamefest, held December 1-3, 1978 at Oakland University, Rochester MI. 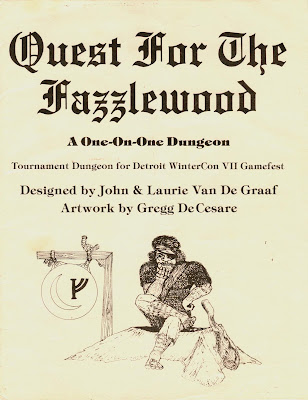 "Quest for the Fazzlewood" (December, 1978) by John and Laurie Van De Graaf.  Cover depicting an ogre seated beside a gong (the first encounter in the dungeon) illustrated by Gregg DeCesare.

The scenario was designed to be played by a single competitor using a thief pregen with a 30-minute time limit, in an attempt to better standardize tournament scoring.
John Van De Graaf, together with MDG chairman Paul Wood, is also known for the early D&D fanzine the Ryth Chronicle (1976-77), "a summary of adventures along the River Ryth", in which Wood played a magic-user named Fazzle.*
*see also D&D In the News (1976): Fazzle on the Ryth at "Playing at the World"
The Van De Graafs, along with other members of the Metro Detroit Gamers (including Wood), were acknowledged in the WinterCon V version of "The Lost Caverns of Tsojconth" (1976).
O1: The Gem and the Staff:
"Quest for the Fazzlewood" was later revised and expanded as part of module O1 "The Gem and the Staff" (1983), a "one-on-one" adventure designed to be run by a DM for a single player, using an 8th level thief pregen, "Eric the Bold".
The first adventure "Tormaq's Tower" is new, and involves the heist of a gem from a wizard's tower.  The second adventure "The Staff of Fazzlewood" is based on the map and encounters in "Quest for the Fazzlewood".
The player's background in the first adventure mentions an "Imperial Guard" and so I situated both adventures within the Empire of Thyatis (the wizards didn't seem high enough level to be Alphatian) when I ran these for my friends, back in the day.
at June 19, 2021 No comments:
Email ThisBlogThis!Share to TwitterShare to FacebookShare to Pinterest
Labels: Mystara, OD&D

Gen Con West (aka Pacific Encounters) 78 was held at the Villa Hotel, San Mateo, California from September 2-4, 1978.  It was the third and final Gen Con West, followed by Pacificon in 1979.  The D&D tournament was "The Dragon Crown". 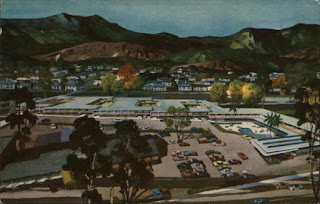 The Villa Hotel, San Mateo, California, site of the Pacific Encounters gaming convention in 1978 (the hotel was closed in 2005).

"The Dragon Crown" was designed by Michael Mayeau and published by Judges Guild as the "Collectors Edition of the 1978 Pacific Encounters Contest Dungeon" (Mayeau would go on to write other adventures and supplements for Judges Guild). 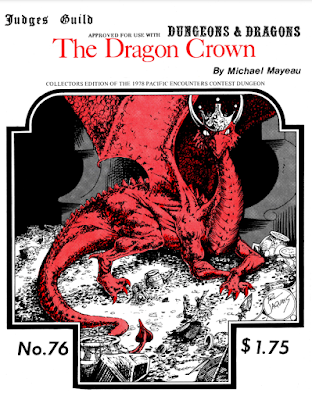 JG 76 "The Dragon Crown" (1979) by Michael Mayeau.  Cover illustration by Jennell Jaquays (a recreation of the original, which was temporarily lost in the mail).

In the scenario, the party inadvertently stumbles into a red dragon's lair.  Rather than incinerating them, the dragon gives them four hours to retrieve a powerful magic item stolen by a nearby tribe of kobolds, the "Dragon Crown".
*the combination of a red dragon with a tribe of kobolds is also seen in module B5 "Horror on the Hill" (1983) by Douglas Niles
As with previous Gen Con tournament dungeons, the D&D tournament for Pacific Encounters 78 was run using OD&D + Greyhawk:

The Vol. I, II, III, and Greyhawk rules must be used.  I realize the Advanced D&D is out, but it was not at the time this contest was designed, and was only newly out when it was run at Pacific Encounters.

Michael Mayeau, The Dragon Crown
Mayeau includes a list of tournament rules, such as bandaging wounds to recover 1-4 hit points (only possible once per day), ability score checks for opening secret doors (intelligence) and understanding traps (wisdom), and a system for critical hits and fumbles.
I haven't played or run "The Dragon Crown", although might consider doing so as a one shot.  It could be used in a campaign for a low-level party, introduced as a seemingly abandoned cave while traveling in the wilderness.
The adventure includes 12 pregenerated characters, ranging in levels from 1-4 (including a paladin from Greyhawk, a druid from Eldritch Wizardry, an illusionist from The Strategic Review #4, and a healer from The Dragon #3).
at June 12, 2021 No comments:
Email ThisBlogThis!Share to TwitterShare to FacebookShare to Pinterest
Labels: OD&D

Scum Swamp (formerly "Krakeland Marsh") is a mini-wilderness setting for OD&D, created by Jennell Jaquays back in 1977.  It includes a dungeon as well as suggested locations for four mini-dungeons, published previously in her fanzine "The Dungeoneer".

Like the "Dungeon Master's Kits" released by Wee Warriors and material by Judges Guild, the mini-dungeons appearing in "The Dungeoneer" predate the earliest modules released by TSR, and are filled with untamed possibilities of the original game. 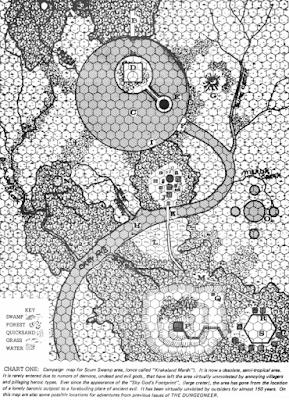 Map of Castle Krake and Slime Swamp, originally published in "The Dungeoneer" #6 (October, 1977)

F'Chelrak's Tomb:
"F'Cherlak's Tomb" (location P) is a mini-dungeon by Jennell Jaquays, originally published in "The Dungeoneer" #1 (June, 1976).  It's intended for intermediate to high level characters.
*see F’Chelrak’s Tomb: The earliest D&D adventure that remains playable on DM David's blog
The adventure uses new monsters (gremlins) described in the same issue, as well as monsters from "Blackmoor" (kopoacinth), and a relic (as per "Eldritch Wizardry").
Merlin's Garden:
"The Fabled Garden of Merlin" (location N) is a mini-dungeon by Merle Davenport, originally published in "The Dungeoneer" #2 (September, 1976).
While not as lethal as "F'Cherlak's Tomb", the scenario still represents a challenge for intermediate level characters.
The adventure uses new monsters (wax golems) described in the previous issue, as well as monsters from The Strategic Review #3 (ghost) and "Eldritch Wizardry" (demon).
Borshak's Lair:
"Borshak's Lair" (location R) is a mini-dungeon by Jennell Jaquays and Mark Hendricks, with Randy Cox, originally published in "The Dungeoneer" #3 (December, 1976).
*for discussion regarding the upcoming 5e conversion of "Borshak's Lair", see this interview (at 34:00) on Wandering DMs (April 10, 2021)
Jaquays designed this mini-dungeon specifically for low level characters, in response to feedback concerning the previous two adventures.
The adventure makes reference to material from "Greyhawk", "Blackmoor", The Strategic Review #3, and "Alcohol in D&D" from "The Dungeoneer" #2.
Pharoah's Tomb:
"The Pharoah's Tomb" (location Q) is a mini-dungeon by Jim Ward, originally published in "The Dungeoneer" #4 (March, 1977), and intended for intermediate to high level characters.
The premise seems potentially inspired by The Tomb of Ra-Hotep, and references "Gods, Demigods & Heroes" (co-authored by Ward).

Night of the Walking Wet:

"Night of the Walking Wet" is a two-part adventure by Jennell Jaquays, Randy Cox, and Tamara Wieland, originally published in The Dungeoneer #5 (June, 1977) and #6 (October, 1977).

The adventure was re-issued as part of "The Dungeoneer Revisited Reflections by Jennell Jaquays & Night of the Walking Wet (Original and Reloaded)" by NTRPG in 2017.

The scenario is intended for intermediate to high level characters, and uses material from "Blackmoor", "Eldritch Wizardry", The Strategic Review #3, and "The Dungeoneer" #2. 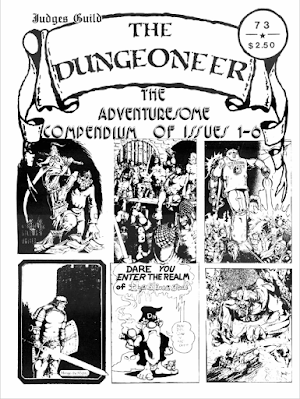 *see History of the Dungeoneer Fanzine from the Acaeum