"The Strategic Review" served as "the newsletter of Tactical Studies Rules" and covered topics in military miniatures, games, and swords & sorcery. Vol. 1, No. 3 (Autumn, 1975) was released in July, 1975 (8 pages).

Announcements regarding "TSR Hobbies" a division for marketing miniatures, under Brian Blume's supervision, and "TSR Games" to publish Mike Carr's "Fight in the Skies" (5th ed.) "as well as a super-fun fantasy boardgame in the near future" (in reference to David Megarry's "Dungeon!")

There is mention of M.A.R. Barker’s "Empire of the Petal Throne" to be released around mid-July, "and it will be the ultimate in fantasy gaming", following a teaser for "the upcoming fantasy game "Petal Throne" in the advertisement for "War of Wizards" in SR #2

Finally, there is an early reference to the infamous "Tomb of Horrors":


Meanwhile, we are getting ready to run some D&D tournament games at Origins I, and from what AH says the games will be filled to capacity (but wait until the players find out just how horrible a place they will be “dungeoneering” in!).

The Strategic Review #3 was described as the upcoming monster "monster" issue in SR #2, as well as in a boxed advertisement on the last page of the 1st printing of the Greyhawk supplement (where "over a dozen new monsters" are promised).

Nine new monsters are described in the "Creature Feature" section, in addition to eight tongue-in-cheek creatures as part of a humorous article by Wesley D. Ives (not covered, below).  Many became instant classics, while others remain obscure:


The Yeti (Abominable Snowman):  These tribal creatures appear in module G2 "The Glacial Rift of the Frost Giant Jarl", acting as scouts for the frost giants.  They use snow leopards (from the AD&D 1e Monster Manual) as their "hunting dogs" and pets.

The Shambling Mound (or the "Shambler"): Inspired by the comic book creature "The Heap", according to Gygax.  I've always thought that a Shambling Mound would make a good wandering monster for "The Fens" on the wilderness map in module B2 "The Keep on the Borderlands".

The Leprechaun: Included in the Wandering Monster Table in the 1st printing of the Holmes Basic rulebook (July, 1977), but removed in the 2nd printing.  These appear in an illustration by David Sutherland in module B1 "In Search of the Unknown" but don't appear in the adventure.

The Shrieker: Included in the Wandering Monster Table in the 1st printing of the Holmes Basic rulebook (July, 1977).  Removed in the 2nd printing, despite an entry for "Shrieker" being added to the monster section.  These also appear in module B1 "In Search of the Unknown".

The Ghost: Although not "true Undead", these creatures (like phase spiders) are described as ethereal.  I've included the Ghost from SR #3 when running "The Creature of Rhyl", an adventure written for use with the Holmes Basic rules.

Naga: Drawn from East Asian folklore, three types are described, the Guardian Naga (Lawful, "found in sacred places"), the Water Naga (Neutral, living in palaces "deep beneath the surface of large ponds and lakes), and the Spirit Naga (Chaotic, and "totally evil").

The Wind Walker: Described as airy, telepathic, ethereal creatures, living in high mountains, or in deep caverns.  They are sometimes forced into servitude by storm giants.  The only early illustration depicting them is from the AD&D Monster Cards (Set 4) in 1982: 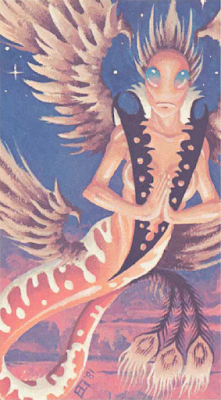 
Little is known about these creatures, or was even remembered by the man who invented them.  In a post on the Q&A Thread with Gary Gygax on EN World, back in 2004, Gygax stated:


About three years back I was playing in an OAD&D game and a wind walker was encountered.  Damned if I could remember just how to attack the critter effectively, so my PC ran away, managed to escape while it was busy attacking others.


The Piercer: Included in the Wandering Monster Table in the 1st printing of the Holmes Basic rulebook (July, 1977), but removed in the 2nd printing.  These appear, along with a Roper, a Shambling Mound, Shriekers, and a Lurker Above in "The Lost Caverns of Tsojconth".

The Lurker Above: In addition to its use in the Metro Detroit Gamers "The Lost Caverns of Tsojconth" tournament adventure, by Gary Gygax (WinterCon V, 1976), one of these creatures also appears in module G3 "Hall of the Fire Giant King". 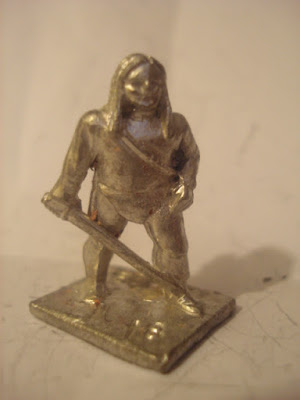 Cimmerian swordsman, one of the Conan series-inspired "Swords & Sorcery" line from MiniFigs.


We are given an update on the "Conan" line of miniatures by MiniFigs:


In #1 we mentioned a "Conan" line to be released by Miniature Figurines, Ltd, but it is not yet available — quite.  The new range will actually be called "Swords & Sorcery", with over 125 figures initially and they look good.  Although they are not "officially" to be for games based on the Conan series, many of these figures will be ideal for such usage (TSR helped MiniFigs in laying out which figures would be adaptable to such usage, so we know of what we speak).

There is mention of the "Battle Report" newsletter, a fanzine published by the American Wargaming Association.  Issue #4 includes "Dirty Tricks for the Dungeons" a D&D article by Bill Hoyer, a member of the LGTSA.

Finally, Europa 6-8 (April, 1975) is described as being "so thick it took me hours to read through!"  A triple issue, it contains the article "How to Set Up Your Dungeons & Dragons Campaign (Part II of a Series) by Gary Gygax.

A contemporary glimpse into Dave Arneson's "Blackmoor" campaign is given:


Dave (The Fiend) Arneson relates the following: “We had an interesting game this weekend in preparation for the great SUPER-NAZI confrontation. A band of heroes went through the ol’ teleporter, and after mucking around awhile (robbery, kidnapping, murder, rape, etc.) the locals sent the police and army after them. (The Germans thought it was guerrilla activity.) The army finally found the farm they were using as a camp and moved in to search it. While thus busily employed the heroes returned from a foray and ambushed them. It was The Great Svenny, Marty the Elf, Richard the Hairy, and 5 berserkers against 26 soldiers with 2 cars, 2 trucks, 4 light mg’s, 2 motars (60 mm), and the usual bevy of small arms. Marty the Elf and 2 berserkers were killed, while the troops lost 7 KIA and 1 wounded before fleeing — good thing too, for shortly thereafter the remainder of the heroes’ force arrived, 3 magical types and another 12 berserkers! The Nazis will certainly be back in strength, and this will result in a big battle..." The LGTSA fought a somewhat similar action in May, and the German patrol managed to save about one-third of its force. However, a panzerfaust certainly takes a troll out in a hurry, and had the Krauts been alert they might have done pretty well.*  The surviving veterans of such a fantastic confrontation would prove to be stout competition for dungeon adventurers and friends.

*this became the basis of the article "Sturmgeschutz and Sorcery, or How Effective is a Panzerfaust Against a Troll, Heinz?" by Gary Gygax, published in The Strategic Review #5 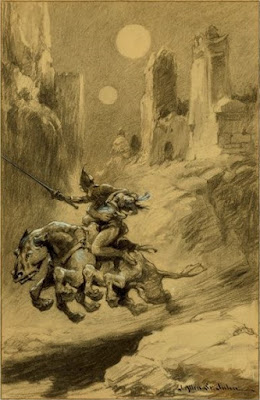 
The final article in SR #3 is "Deserted Cities of Mars" by Jim Ward, which succeeds in distilling the atmosphere of the abandoned cities described by Burroughs, scattered across the dead sea bottoms of the red planet, and occupied by warlike Tharks and Warhoons.

As written, the piece was no doubt intended for the short lived "Warriors of Mars" game, but could easily be used to help construct a deserted city in a D&D game, for characters transported to the red planet (whether by cursed scroll, or by other means).
at February 08, 2020