Module B2 "The Keep on the Borderlands" includes a section for "Adventures Outside the Keep" together with a map of the surrounding area (cartography is uncredited, but was by David S. LaForce (aka DSL, or "Diesel", who was also responsible for the map of the Keep). 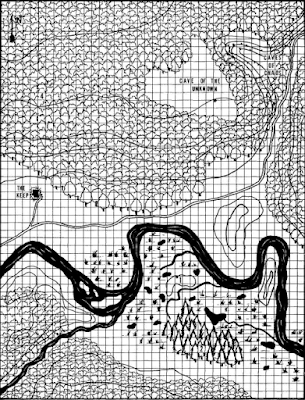 Wilderness Map from module B2 "The Keep on the Borderlands".  Scale: one square = 100 yards.

A few observations regarding the wilderness map:

According to the module "The normal movement rate is 1 square per hour searching, 3 walking.  Walking in the fens is at the rate of 1 square per hour.  Walking is done in the forest at 2 squares per hour."  Since a "league" originally referred to the distance a person could walk in one hour, and an English league is 3 miles, one would expect a scale of one square = 1 mile.

However, since the scale on the map is given as one square = 100 yards, and there are 1760 yards in a mile, the movement rate should probably be increased to 18 squares per hour searching, 54 walking (for an unarmored, unencumbered man).  A fully armored man would be one-third slower, and a fully armored man, heavily loaded, two-thirds slower.*

*Random Wizard posted a 3D rendering of the wilderness map

Finally, (and because the question comes up), the river flows from left to right (west to east), as indicated by the smaller tributaries, joining the main flow. 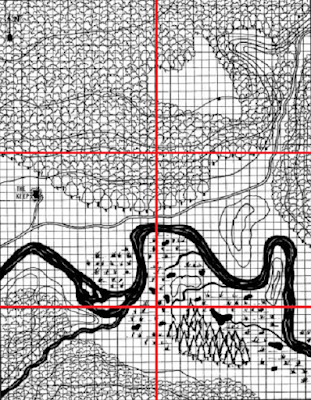 Wilderness Map from module B2 "The Keep on the Borderlands", divided into six sections (each containing at least one point of interest).

The last time I ran module B2, I divided the map into six sections and only handed my players the section containing the Keep.  I then asked them if they wanted to go north into the forest, east along the road, or south across the river.  I added the appropriate section, based on their choice, and continued adding sections from there.

For those of you desiring to approach the wilderness outside the Keep as a hexcrawl, Snorri posted a Borderlands hexmap over at his blog "A Wizard in a Bottle", back in 2010.*  (Also worth checking out are his posts regarding Borderlands cultural anthropology and geography and Borderlands agriculture).

*see also this version of the wilderness map, in Hexographer

You may also wish to expand on the other encounter areas, designing camps, lairs or lost ruins to permit more adventuring.

The Keep on the Borderlands

Dyson Logos expanded the fens to the southeast of the Keep, back in 2018.  He included a map of the interior of the Mound of the Lizard Men, as well as some new areas.

He also expanded the encounter with the Mad Hermit, back in 2014, including a map of the hollow tree, as well as some new magic items.

The module makes no mention of wandering monsters, although a table can be drawn up, based on the inhabitants of the Caves of Chaos.

The wilderness map was updated in AD&D 2e's "Return to the Keep on the Borderlands" (1999) by John Rateliff, with events taking place twenty years after events in the original module.

Rateliff provides several pages of new encounters, as well as wandering monster tables for the Road, Wood, and Swamp areas.  Some notable new ones include "The Bee Man" and a group of pilgrims (preaching "The Second Coming of the Great Prophet Quonzar").

Goodman Games' OAR#1 "Into the Borderlands" (2018) includes an entire chapter devoted to adventures outside the Keep, which draws upon module B2 as well as Rateliff's adventure.

On a final note, including mention of the weather is a great way to add some realism to the wilderness.  There is a simple but serviceable table in Chainmail: 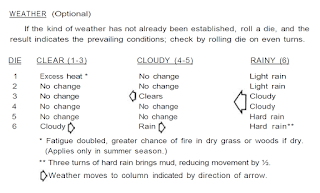 Table for determining the weather, from Chainmail (pg. 21-22).

For those desiring something more complex, see the article "Weather in the Wilderness" in The Dragon #15 (June, 1978).

at April 11, 2021
Email ThisBlogThis!Share to TwitterShare to FacebookShare to Pinterest
Labels: Chainmail