B2: The Caves of Chaos

The Caves of Chaos have been recreated in Sketchup (including 3D renderings of Cave A: Kobold Lair and Cave G: Shunned Cavern), Tabletop Simulator, and even Dwarven Forge.  There has also been some great fan art produced over the years, (such as here and here). 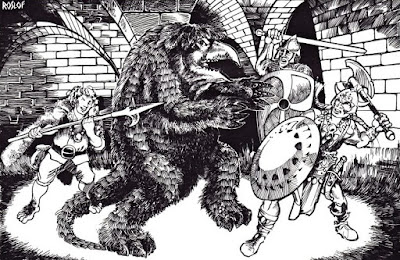 Free, virtual tabletop-worthy maps of the Caves of Chaos were Reimagined by Weem in 2012, (although I prefer the simple Players Map shared in this EN World thread, and printed out a poster-size version at Staples for my players to use).

Andrew White posted a colorized, annotated map redux of the Caves of Chaos, over at his site "RPG Cartography" back in 2015.*

In terms of analysis, Random Wizard shared some insightful observations in this post back in 2012, and Delta covered the Caves of Chaos as part of his Subterrane Surveys in 2020.

Also worth checking out, Snorri's blog "A Wizard in a Bottle" posted Eight variants on the Caves of Chaos, back in 2011.

Understanding the Caves of Chaos:

By the time he wrote module B2 "The Keep on the Borderlands", Gary Gygax had progressed beyond the megadungeon, having designed the classic G and D series.  The Caves of Chaos are basically a collection of mini-lairs, bound under the "Shrine of Evil Chaos". 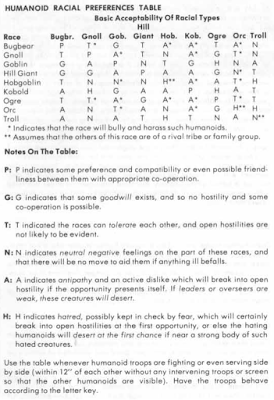 In order to best appreciate the types of interactions that Gygax was envisioning between the different humanoid races in the caves, one should consult the "Humanoid Racial Preferences Table" from the AD&D 1e DMs Guide, page 106 (reproduced above).*

*In the section on "Tribal Alliances and Warfare" he states "You might allow player characters to somehow become aware that there is a constant fighting going on between the goblins and hobgoblins on one side and the ores. sometimes with gnoll allies, on the other - with the kobolds hoping to be forgotten by all, and the bugbears picking off any stragglers who happen by."

(See also "Keep on the Borderlands: Factions in the Dungeon" at The Alexandrian)

The presence of humanoid females and young has long been a source of consternation for players.  For an interesting take on this, see the Mothers of the Borderlands at Le Chaudron Chromatique (as well as the illustration of the Orc Leader's Room by Evlyn M).

The Caves of Chaos were updated (and upgraded) in AD&D 2e's "Return to the Keep on the Borderlands" (1999) by John Rateliff, with events taking place twenty years after the caves were cleared out in the original module.

Rateliff did a great job of portraying the Caves of Chaos as chaotic.  The various denizens don't get along, and PCs stand a good chance of getting caught in the crossfire.  (Of course, good players will find a way to turn the situation to their advantage...) 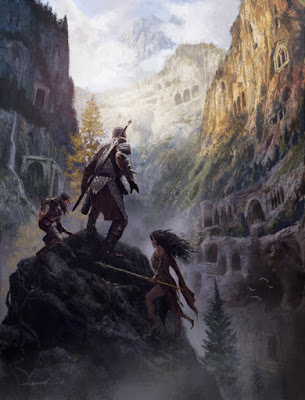 The D&D "Next" Playtest used The Caves of Chaos to inform the development of 5e back in 2012, including five alternate background scenarios to serve as plot hooks.*  (It can therefore be stated that module B2 is truly "baked into" the DNA of 5e).

*see also Return to the Caves of Chaos by Robert J. Schwalb

0one's Blueprints: Caverns of Chaos (2006) is an impressive expansion and re-imagining of the Caves of Chaos.  Maps for 19 different dungeons are spread across six pages, which can be assembled to form a huge map (25.5 x 22 inches).

JN1: The Chaotic Caves (BFRG, 2009) is another fresh take on the Caves of Chaos.  The adventure includes a stockaded town in place of the Keep, as well as an updated wilderness map.  The free pdf is downloadable, here.

Dungeon Module SG9 "Reclaiming the Caves on the Borderlands" (Sacrosanct Games, 2015) for 5e represents an interesting twist.  The players use humanoid PCs in an effort to reclaim the Caves of Chaos, a year after the events in the original module.