"The Book of Treasure Maps" is a collection of 5 mini-dungeons published by Judges Guild, written and illustrated by Jennell Jaquays, for use with D&D. 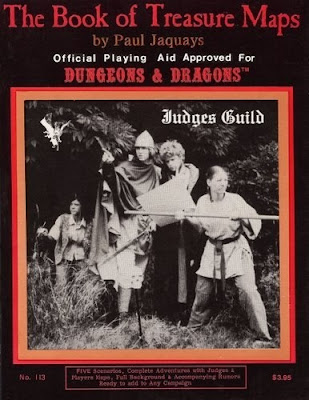 Four of the scenarios are explicitly situated in the Judges Guild "Wilderlands of High Fantasy" setting, while the fifth is generic.

Although recommended levels are not provided, I would regard these as intermediate level adventures, appropriate for character levels 5-9.*

*the adventures "are of varying difficulty, for characters ranging between first and tenth levels" in "Tips from the Tower" from Judges Guild Journal #18 (December 1979/January 1980)

As with "The Caverns of Thracia", the first three of the five scenarios include rumor tables.

"The Lost Temple" is located on Campaign Map #10: Lenap, from JG 67 "The Fantastic Wilderlands Beyonde"

An ancient temple, hidden deep within the jungle, is described.  The Eldritch Wizardry supplement is referenced.

The Tomb of Aethering the Damned:

"The Tomb of Aethering the Damned" is located on Campaign Map #9: Elphand Lands, from JG 67 "The Fantastic Wilderlands Beyonde"

A tomb, hidden behind a mountain waterfall, is described.  (See this review from 2015 for discussion on this adventure).

"The Lone Tower" is located in the Forest of the Crying Wood, on Campaign Map #4: Tarantis, from JG 48 "Wilderlands of High Fantasy"

Also known as Clearmoon Castle, this is a phenomenal adventure. 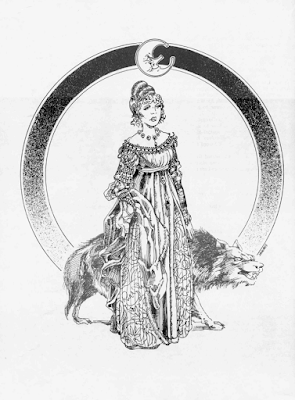 For years, I've searched for something appropriate to use for the ruins of Wereskalot on the map of the Grand Duchy of Karameikos from the 1981 Expert Set.

"The Lone Tower" has a resonant B/X vibe, and is the perfect fit.

"Willchidar's Well" is located on Campaign Map #12: Isles of the Blest, from JG 92 "Wilderlands of the Magic Realm" 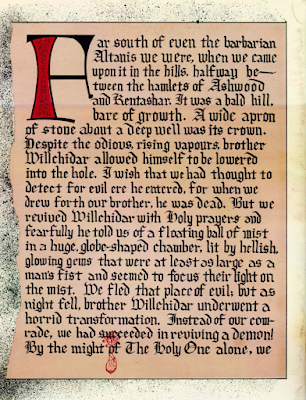 An imprisoned demon lord is described, making this one of the tougher adventures.

The Crypts of Arcadia:

Like "The Caverns of Thracia" this adventure is not located on the Judges Guild world, although would fit well in the Empire of Thyatis in the Known World/Mystara setting.

"The Crypts of Arcadia" are designed as a living, not a static, dungeon.  Both encounters and room contents are randomly determined.

Jaquays departed Judges Guild shortly after completing "The Book of Treasure Maps", having worked there for only one year.

See this review from 2017, for more discussion on "The Book of Treasure Maps"

at July 24, 2021 No comments:
Email ThisBlogThis!Share to TwitterShare to FacebookShare to Pinterest
Labels: Mystara 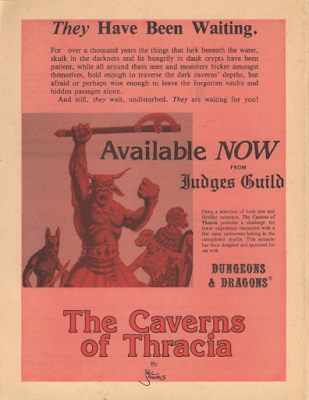 As mentioned in the campaign journal, above, the Empire of Thyatis in the Known World/Mystara setting is a fitting location for "The Caverns of Thracia".
The Greek references work particularly well, given the Byzantine inspiration behind the Empire of Thyatis.
In fact, beginning with "Morkendaine", continuing with "The Caverns of Thracia", and concluding with "Dark Tower" would make for an epic, all-Jaquays campaign.
at July 17, 2021 2 comments:
Email ThisBlogThis!Share to TwitterShare to FacebookShare to Pinterest
Labels: Mystara

With the expansion of the Empire and the extension of her protection to other, less ominous trade routes, Redmoon Pass has become frequented only by ignorant, wayward or weather-driven travellers who fear the whim of the elements more than they dread the terror of old legends. Situated centrally in the pass, the tiny village of Mitra's Fist appears to be a haven from the many storms that stalk wayfarers in the high mountain reaches. Even so, the wise and knowing do their best to avoid Mitra's Fist, better known as "Mitra's Curse".

"Dark Tower" is a 70-page adventure for 6-8 characters of 7th-11th level by Jennell Jaquays, the first adventure published by Judges Guild approved for use with AD&D.

Ranked among the 30 "Greatest Adventures of All Time" in Dungeon #116 (November, 2004), "Dark Tower" was also nominated for the 1979 H.G. Wells award for Best Roleplaying Adventure. 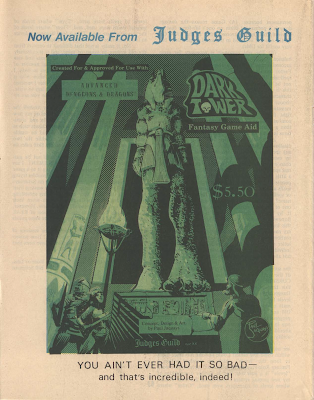 The village of Mitra's Fist is described, as well as a sprawling four-level dungeon, complete with wandering monster tables.

Beneath the village, and interconnected with the dungeon, are the White Tower of Mitra, and the eponymous Dark Tower of Set.

Jaquays includes several minor artifacts, in addition to some memorable new monsters, the "Lions of Mitra" and "Sons of Set"*

*a possible inspiration or precursors to the yuan ti, from module I1: "Dwellers of the Forbidden City" (1981) by David Cook

Like Morkendaine, this adventure was published after the AD&D 1e Monster Manual and Players Handbook were released, but before the AD&D 1e Dungeon Masters Guide was available.

"Dark Tower" involves a centuries-long conflict between the forces of the Lawful Good deity Mitra and the god of Evil, Set. 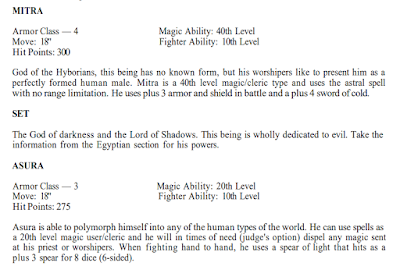 Both Mitra and Set, as well as the Lawful god Asura (from "Morkendaine"), appear in the Hyborian Age stories of Robert E. Howard.*

*Jaquays specifically cites the Conan story "Red Nails" as the major inspiration for "Dark Tower" in this interview on Grogtalk (July 6, 2021)

"Dark Tower" also uses the Minions of Set (described in the section on "Egyptian Mythology" from Gods, Demigods & Heroes).

The goddess Ishtar is mentioned as a patron goddess in "Dark Tower", and is likewise listed as a "Hyborean" deity in Gods, Demigods & Heroes.

The original version of "Dark Tower" mentions an Empire, but makes only passing reference to the Invincible Overlord.

Additional information explicitly situating the adventure within the Wilderlands of High Fantasy was included in a subsequent d20/3.5e version, JG3: Dark Tower (2007) by Jennell Jaquays and Greg Geilman.

Goodman Games recently announced the upcoming release of an homage and conversion to D&D 5e and Dungeon Crawl Classics.

The continental setting introduced in module X1: "The Isle of Dread" (1981) became "The Known World" of the Gazetteers, and ultimately "Mystara". 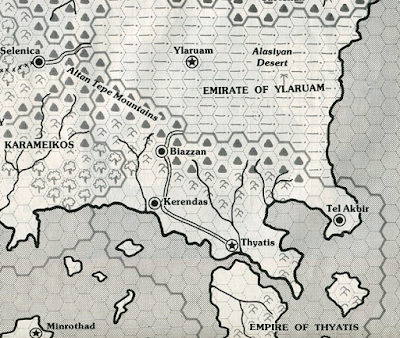 With its pulpy roots, the Known World presents an excellent setting for "Dark Tower", somewhere in the mountains between the Empire of Thyatis and the Emirate(s) of Ylaruam.*

*Thyatis is a fitting location for the Roman mystery religion of Mithraism, while Ylaruam could possess Egyptian-style ruins for the cult of Set.

I would suggest locating the village of Mitra's Fist within Redmoon Pass along a seldom-used trade route across the Altan Tepe Mountains.

at July 10, 2021 6 comments:
Email ThisBlogThis!Share to TwitterShare to FacebookShare to Pinterest
Labels: Mystara

"Morkendaine" is a 16-page dungeon for 1st and 2nd level characters by Jennell Jaquays, published in The Dungeoneer #9 (January-February, 1979). 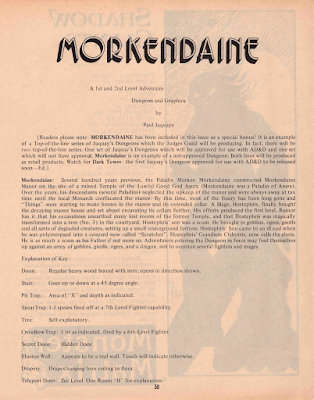 An abandoned manor house and its cellars are described, as well as the two-level dungeon beneath.  A new monster, the shadow giant, is included.
The Lawful god Asura is loosely based on the Hyborian Age deity mentioned in Robert E. Howard's "The Hour of the Dragon" also appearing in Gods, Demigods & Heroes.
Many of Jaquays' classic design elements are apparent, with enough interesting material for several game sessions. 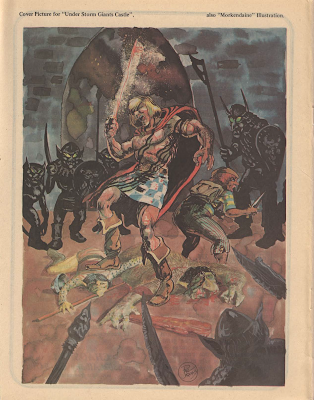 Illustration for "Morkendaine" by Jennell Jaquays, published in The Dungeoneer #11 (used for the cover of JG 93 "Under the Storm Giant's Castle")