Eldritch Wizardry was notable for introducing both demons and psionic creatures, as well as a number of artifacts and relics.  The artifacts had suggested powers, although the DM was advised to determine their actual powers.  Many of these entered Greyhawk lore.

Invisible stalkers can travel on the astral and ethereal planes.

Yellow mold can form into great colonies, which can become mentally aware and employ id insinuation.


Demons: The origins of Type I-IV demons remain obscure, although might have been inspired by medieval bestiaries.  Succubi were drawn from medieval folklore. 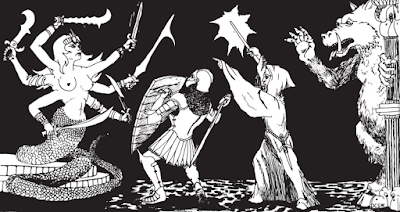 A fighter and a magic-user confront a Type V demon (left) as a Type IV demon (right) prepares to attack.  Illustration by David Sutherland.

Type VI demons were referred to as balrogs in the 1st-4th printings of Eldritch Wizardry, before references to Tolkien were removed.

Demon Princes: Two of the most powerful are described


Orcus, the Roman god of the underworld, possibly inspired by his appearance in "Changeling Earth" (1973) by Fred Saberhagen.

Demogorgon, whose origins are more obscure, made famous by the Netflix series "Stranger Things" (2016).


Update (August 12, 2020): I recently became aware of an additional writeup for "Yeenoghu, Demon Lord of Orcs" from the in-house newsletter, the Strategic Preview #5 (Summer, 1976) as reported by Frank Mentzer in this thread

Demons' amulets may likewise be derived from the "Changeling Earth", the third volume in the "Empire of the East" series by Fred Saberhagen.


Couatl: Based on the Mesoamerican feathered serpent.  The couatl and at least 3 other psionic creatures from Eldritch Wizardry appear in Ernst and Johanna Lehner's A Fantastic Bestiary (1969), as discussed in this post by Jon Peterson.

Ki-Rin: Based on the Japanese creature, described as a "cloudy horse", also from Ernst and Johanna Lehner's A Fantastic Bestiary (1969).

Shedu: Based on the Sumerian human-headed, winged, bull-like creature, also from Ernst and Johanna Lehner's A Fantastic Bestiary (1969).

Mind Flayers: A reworking of the creature featured in The Strategic Review #1.

Su-Monsters: Wasp-waisted, great chested hounds, with heads much like a gorilla's, also from Ernst and Johanna Lehner's A Fantastic Bestiary (1969).


These are alien creatures of the sort that appeared in different forms in SF, Horror or mixed. Greatest influence was the "Mind Parasites" by Colin Wilson.

Thought Eater: Sickly grey, skeletal-bodied, enormous headed platypi whose webbed paws allow them to swim through the ether.  Also the name of an excellent blog and podcast.

The Invulnerable Coat of Arn: In reference to a paladin in Gary's campaign


That played by Don Arndt was the most cautious one I have ever experienced or heard of. His behavior was so remarkable that the Artifact, "Invulnerable coat of Arn" was created to jape at such play.

The Mace of Cuthbert: A holy relic from the time of St. Cuthbert, named after a real world, Anglo-Saxon saint.

The Sword of Kas: Named after the lich Vecna's onetime bodyguard, in reference to Tim Kask


It was often our habit to use character names on items; they threw in the Sword of Kas just for a lark, and never told me until I found it.

The Axe of the Dwarvish Lords: Forged in the heart of a volcano, a weapon of dwarvish kings, until it disappeared in battle, over a thousand years ago.

The Wand of Orcus: A rod of obsidian, used by the demon prince of the undead, with its own wikipedia entry.

The Rod of Seven Parts: Another artifact with its own wikipedia entry.

The Codex of the Infinite Plains: A magical tome belonging to the wizard-cleric, Tzoonk, who ruled the Isles of Woe, before they sunk in the Lake of Unknown Depths.

The 1st printing is missing the "Tzoonk Fragment":


...and thereupon the voice belled forth in tones of hollow iron and spoke of the Coming of the City of the Gods.  Such future events interested me not, no I gave the command: 'Answer in th...' (here the fragment becomes entirely illegible)... so knowing both the secret and the spell which would unlock the Way to this horde of the Demon Prince Nql... (another break in the writing unfortunately occurs here)... gathered the nine as required and proceeded forth.  With me in addition were the dyoph servants necessary to transport the Code [sic], for I would not leave it behind on even so perilous a journey as this." (Here the entire fragment ends.)

The Hand of Vecna: A relic of the powerful lich, Vecna, whose name is an anagram of Vance, created by Brian Blume.

The Eye of Vecna: Another relic of the lich, Vecna.

The Machine of Lum the Mad: A gigantic piece of machinery with 70 levers and 30 dials.  The Machine was featured in a Chainmail scenario.

The Might Servant of Leuk-O: A towering automaton, left by a visiting race of space travelers.  Created in reference to Gary's son, Luke Gygax.

The Jacinth of Inestimable Beauty: An indescribably lovely gem, once the property of the fabled Shah Cham' Ponee.

The Crystal of the Ebon Flame: A crystal-like substance with a small, ebon flame in its center.

Horn of Change: Three blasts will cause a variety of things, at random.

The Ring of Gax: A ring of platinum set with a stone with eight facets.  Created by Blume, in reference to Gary Gygax.

The Throne of the Gods: A massive, gold-inlaid throne, carved into the heart of a mountain by an ancient race in honor of their gods.