When I learned that psionics in Eldritch Wizardry were partly based upon the abilities of a new character class, devised by Steve Marsh, I needed to know more:
The Mystic:


I can answer questions about the "real" mystic. The real mystic had all the psionic powers, but no psionic attacks (the attacks and defenses were to go with another class). They gained powers or abilities as they went up levels (much like magic users gain spells) and they started out with a bare handed attack that emulated different weapons for "to hit" modifiers and damage and then was like a sword, with plusses. When eldritch wizardry came up short of material, I'm told that "they" decided to just chop up the character class and make it into another set of powers characters could have instead of a separate class. But, you can easily read between the lines to see the entire character class based on vedic yogis. Sat Gurus, etc. (a complete name table that was authentic, even).  The character had plane traveling skills and abilities intended to mesh with the plane concepts I had.

The new class predated Origins I (July, 1975) where, among the various ways to destroy the Lich's skull in the Tomb of Horrors, we are told "A Mystic can destroy by mind battle (Mental power rating of the skull is 18)." (although this sounds more like the Divine).

We get a fairly good idea of the kinds of powers Marsh's mystic class possessed, taking a look at the psionic abilities tables in Eldritch Wizardry:

Fighting Men (Including Paladins and Rangers) & Thieves (Including Assassins)

In retrospect, I think that a new character class, based on vedic yogis, would have been interesting to see, so I took a stab at reconstructing the class. 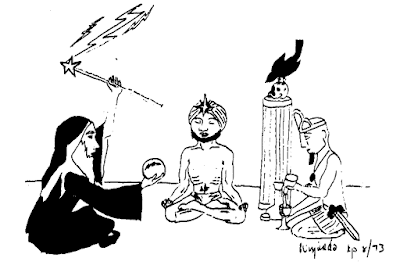 Player-characters with unmodified scores of 15 or more in their intelligence, wisdom, or charisma may elect to check their psionic ability (become mystics).

Fighting-men (Mystics) with psionic ability are basically attuned to the powers commonly known here as Yoga.  There are 20 possible "devotions" they may be able to perform (the 18 Siddhis and the 2 Sciences) if they follow the course of developing their mental prowess.

(I'm not sure what Marsh means by "devotions" or "the 2 Sciences", but regarding the 18 Siddhis, I found this document helpful):

It would probably make sense to use the monk from the Blackmoor supplement as the basis for an OD&D mystic.  Now all that's needed is to just get some feedback, and write it up.*