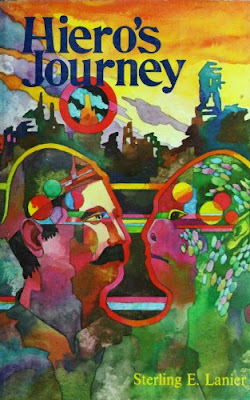 
Lanier's novel is a profoundly influential work.  It's been reviewed on several OSR blogs, and covered on the always excellent "Appendix N Book Club" as well as yet another great podcast, "Sanctum Secorum".  Both are recommended listening.

The idea for the divine predates Origins I (July, 1975) where, among the various ways to destroy the Lich's skull in the Tomb of Horrors, we are told "The highest Divine destroys it by touch" (which seems more in keeping with a Mystic's abilities).

Since we know that psionic combat formed the basis of Gygax's divine class, we can get a good idea of what might have been involved by focusing on the psionic combat abilities in Eldritch Wizardry:


As in "Hiero's Journey", psionic creatures in OD&D are more vulnerable to psionic attacks than are non-psionic creatures.  Psionic combat can be mentally draining, although Hiero gains additional proficiency with each subsequent encounter.

*a B/X take on the Divine (or, "the Devine"), based on Steve Marsh's reworking of the class for The Cupric Text zine, was posted by Richard J. LeBlanc, Jr, author of PX1 Basic Psionics Handbook, on his blog in October, 2015.
at May 20, 2020