"The Strategic Review" served as "the newsletter of Tactical Studies Rules" and covered topics in military miniatures, games, and swords & sorcery.  Vol 2, No 2 (April, 1976) was released in March, 1976 (24 pages). 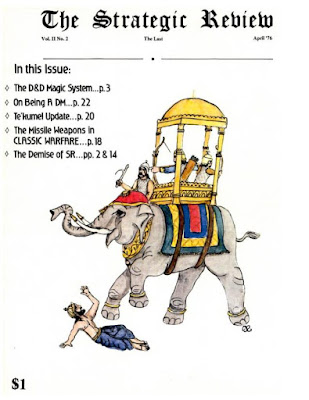 The Strategic Review #7 (April, 1976).  Cover illustration by David Sutherland, from the back cover to "Classic Warfare".

We learn of the formation of TSR Periodicals, and the splitting of "The Strategic Review" into "The Dragon" devoted to S&S, Fantasy, Sci-Fi, and RPG, and "Little Wars" (which only lasted 12 issues) devoted to the established types and periods of wargaming.

There are also announcements regarding the hiring of David Megarry, designer of Dungeon!, Mike Carr, designer of Fight in the Skies (FITS), and David Sutherland, whose black and white illustrations helped to define the look of early D&D.

Some recommendations are given for music to play by:

Music is capable of setting the mood for any endeavor, and playing D&D is no exception.  If the music is good enough, it can add immeasurably to the expedition/adventure, and sometimes helps keep rowdy parties quieter and more manageable.  Rick Wakeman has two albums that are particularly noteworthy in that respect; they also treat the listener to some good fantasy in their own right.  The two I refer to are "Journey to the Center of the Earth" and "Myths and Legends Surrounding King Arthur and the Knights of the Round Table."  Another of his that is suitable is "The Six Wives of Henry VIII."  Another artist is also worth mention, in that his music is very apropos to dungeoneering.  I refer to Bo Hansson, and his two works: "Music Inspired by the Lord of the Rings" and "Magicians Hat".

We also have the endorsement of a new comic book:

There is an excellent "underground" comic that has made a significant contribution to S&S out now.  It purports to be 24 issues in length, in its entirety, and may set a new trend in story telling.  I refer to FIRST KINGDOM, by Jack Katz.  The first three volumes are now available, and well worth looking for on your stands.

I remember seeing advertisements for "The First Kingdom" in Bud Plant's comics catalogue.  The post-apocalyptic fantasy setting might have influenced the conception of Greyhawk.  Katz is credited with promoting the early "graphic novel" format.

These categories informed the development of the types of spells in AD&D, namely alteration (the alteration of existing substance), evocation (the creation of new substance), enchantment/charm, necromantic (the changing of normal functions of mind and/or body), divination, abjuration (the addition of new functions to mind and/or body) conjuration/summoning (summoning and/or commanding existing entities), and illusion/phantasm (creating new entities).

For a comprehensive discussion on the types of spells in AD&D (there are several different combinations of the above categories, with two additional "unique" categories), see this thread on "Magic Taxonomic System Analysis" on Dragonsfoot.

A description of "The Character Archaic", by Wee Warriors:


There is a new playing aid available that has to be one of the finest accessories on the market.  The craftsmanship, design, printing and graphics are superior to a lot of GAMES on the market.  It was designed by Pete and Judy Kerestan, and illustrated by Brad Schenck.  We are now the exclusive dealers for it, and find it hard to convey objectively, that it’s darn good, and we’d say the same if we didn’t carry it!  We’re referring to the CHARACTER ARCHAIC.  It contains character sheets for six mages, three clerics and sixteen fighter-types.  While the first sample didn’t have any, we have been assured that there will be character sheets for ladies in each.  In the fighter-types, there are specimens of all the races.  It also contains the WIZARD’S TOMB, a map for solitaire exploitation, a combat reference sheet, for transcribing all the data pertinent to fighting, a sheet for noting creature encounters, and a non-player character roll call.  In short, this nicely packaged bit of goods is the answer to the hassles of correlating all your data, characters, etc.  The best thing is that it is equally useful for BOTH EPT and D & D!!  For the paltry price, it is a steal . . .


A well-written piece of D&D-inspired short fiction, by Jim Hayes.  There is a good description of the workings of a reincarnation spell.  A party of adventurers are attacked by giant scorpions, in an attempt to retrieve a cache of treasure, including an enchanted sword.


Three new magic items, contributed by Neal Healey.  The Cup and Talisman of Akbar (a potion-generating chalice), the Staff of the Priest Kings (the clerical equivalent of a Staff of Wizardry), and the Brazen Bottle (a flask to imprison enchanted creatures).

A tongue-in-cheek write up for "The Denebian Slime Devil", no doubt inspired by this toss-away reference from an old Star Trek episode.

An adventuring party is put to flight by a catoblepas.  Illustration by Dave Trampier, from the AD&D 1e Players Handbook.

The "Catoblepas" is described, attributed to Steve Marsh in this interview (confirmed, here).  The creature was renamed the "Nekrozon" in the BECMI Master Rules (1985).

The Missile Weapon in Classic Warfare:

Article by Gary Gygax, written for "Classic Warfare" although interesting from a D&D point of view.  The various types of bows are described, as well as the utility of the sling, which only makes its first appearance as a weapon in the AD&D 1e Players Handbook (1978).

A table submitted by David Klempa which ascribes bonuses to thieves' skills, based on their dexterity score, with increased chances for extraordinary dexterity (subdivided into additional categories, as determined by an percentile roll).

I've never seen this used, but it would certainly make a low-level thief more useful.  I've similarly toyed with giving a bonus to a thief's chances, based on their experience points bonus for high dexterity (5-10%) but never actually tried it.

D&D Is Only As Good As The DM:

An article by Gygax, presented as advice to early DMs.  This would not have been out of place in one of the early modules or rulebooks.

Mention is made of "Dungeons & Beavers" at CalTech, in reference to the Warlock system "where the rules have been expanded and changed to reflect incredibly high levels, comic book characters and spells, and so on."  (The beaver is the CalTech school mascot).
Gygax provides a guide, namely 50-75 games (in the course of a year!) to obtain 9th to 11th level, and states that "no player in either BLACKMOOR or GREYHAWK has risen above 14th level."
at May 09, 2020
Email ThisBlogThis!Share to TwitterShare to FacebookShare to Pinterest
Labels: OD&D, The Strategic Review