"Hints for D&D Judges" was a series of articles published in The Strategic Review and The Dragon, contributed by Joe Fischer, a player in the original Greyhawk campaign, and the creator of the ranger class (from The Strategic Review #2).
Update (Sept 23, 2020) - Joe Fischer was also president of the gaming club at Badger High School in Lake Geneva, as recounted by Skip Williams, in an interview by Dan and James on Grogtalk, episode 63.  Skip was also a classmate of Ernie Gygax.

In the first instalment, Fischer describes the necessity for a base of operations, where equipment can be bought, and players can stay, in between dungeon expeditions.  These functions were met by The City of Greyhawk, in the original Greyhawk campaign.

A map is also required, divided into quarters, using standard graph paper (a scale of 1 square = 20 feet is suggested), and possibly color-coded (as both The Town of Blackmoor and City of Greyhawk were).  EPT's "Jakala" is given as a notable example.

Much else mentioned in this article is drawn from OD&D vol. 3 "The Underworld & Wilderness Adventures".

The second instalment provides a step-by-step guide on how to draw a wilderness map, what colors and symbols to use, etc.


Part 3: The Dungeons (published in the Dragon #2)

The third instalment is the most interesting, partly because of a glimpse into the original Greyhawk campaign:


True, the famous game of Gary Gygax and Rob Kuntz is built around and under Greyhawk Castle, but this is far from being the only entrance. Besides the castle, I have discovered an entrance through an old dry cistern and another entrance that is under a pool of quicksand, and even an entrance in a simple hole in the ground.

There is a table for randomly determined traps (some fairly nasty) and suggestions for inspiration from fiction (such as "The Weird of Avoosl Wuthoqquan" by Clark Ashton Smith). 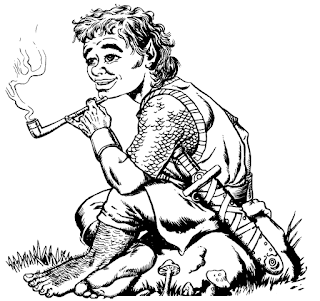 A list of new magic items is given, including Hobbits' Pipe, Pipeweed of Tranquility, Pipeweed of Stoning, Pipeweed of Illusion, and the (tongue-in-cheek) Pipeweed of Acapulco; Ring of Magic Missiles; Bag of Infinite Wealth; Helm of Forgetfulness; Ring of Infravision.

Fischer goes on to describe a few genre-mixing ideas for special adventures:


One of the most interesting adventures I’ve ever had dealt mainly with the idea of what would happen if a knight in shining was suddenly transported aboard the “Santa Maria” on its way to discover America.  To carry this idea further, you can create all sorts of strange areas; have a wizard suddenly find himself on the Normandy Beaches on D-Day, a Patriarch who finds himself as a stowaway on the nuclear powered U.S.S. Nautilus on its shakedown cruise, or even a Lord who finds himself on the banks of the Little Big Horn and sees a column of blueclad cavalry figures riding towards him.

There is mention of additional works of fiction as inspiration:


The favourite books of the judge can be turned into parts of the castle, or worlds that adventurers can be transported to, like Larry Niven’s Ringworld, Tolkien’s Moria, Clark Aston Smith’s Hyperborea, Arthur Conan Doyle’s Lost World, or Fritz Leiber’s Newhon.

As well as for creating special monsters:


When it comes to ordinary monsters for guarding normal treasures, D & D, Greyhawk, Blackmoor, and the Creature Features in The Dragon have everything you need.  But when it comes to those special treasures, then look to the fantasy writers like H.P. Lovecraft and his gods and demi-gods to help you.  Or the terrible sand worms of Frank Herbert’s Dune.  And if you can’t find enough in the field of fantasy, then check out the science-fiction writers of today.  Like Larry Niven’s “Puppeteers,” Dickson’s “Dorsai,” H.G. Wells’ Martians, or the creatures and peoples of the Star Trek Series.  (How would you like to be walking down a corridor in the dungeons and be transported to another strange looking corridor, on the “Starship Enterprise”?  With a tall humanoid with pointed ears saying “Highly illogical”?)  Or even worse is not using fiction at all, but fact.  In other words your players could find the Bermuda Triangle and what causes it!

A fourth instalment, with ideas for developing a campaign, was mentioned in Part 2, but never published.  I suspect that much of part 4 was incorporated into part 3.
at May 10, 2020