The Town of Blackmoor

From the castle itself the small town of Blackmoor grew, then the surrounding countryside became filled with new holes to explore...

"Points of Interest in Black Moor" was published in Domesday Book #13 (July, 1972) together with a map of the town. 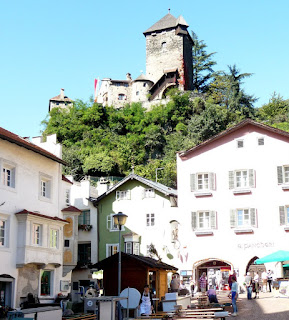 View of Branzoll Castle from the town square.  The view of Blackmoor Castle from Victory Square outside the Comeback Inn would be similar.  (Photograph from tripadvisor.)


Back in 2017, Havard shared this map on his blog (attributed to Domesday Book #13, but possibly from another source): 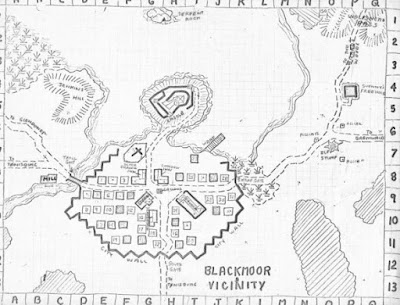 The ground plan of the castle is based on the Burg Brazoll model kit.

Within the town, the Silver Dragon Inn, the Comeback Inn, the Gallows, the Store, the Warehouse, the Church, and a Wharf are labeled.  Another forty smaller buildings are numbered.

There are three gates leading past the city wall:

An island in the center of Blackmoor Bay is labeled Serpent Rock.  A small cave opening is visible, facing south.  A scale for the map is present in the upper right hand corner.

In December, 2016, another map was posted on the "Secrets of Blackmoor" Facebook page, along with some fascinating insights into pre-D&D Blackmoor adventures: 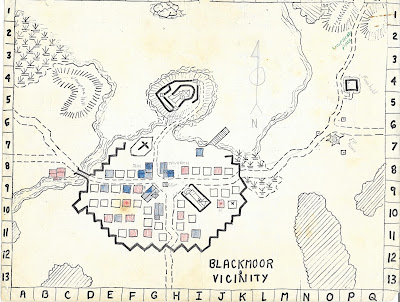 On this map, Jenkins Hill is labeled Vampire Hill, and Elf Stump is labeled Elf Home.  The buildings in the town are color-coded, red for David Megarry's thief McDuck's gang, and blue for Dan Nicholson's Merchant of Blackmoor.

In Playing at the World (2012) Jon Peterson states "...Duane Jenkins apparently wasted a wish to transform his character into a vampire - only to find that Arneson, exercising the latitude of the referee, exploited a loophole in his wording and turned him into a vampire rose bush."

at November 03, 2019
Email ThisBlogThis!Share to TwitterShare to FacebookShare to Pinterest
Labels: Blackmoor