Blackmoor Castle was built in the third year of the reign of Robert I, King of all Geneva, as a defense against the Barbarian hordes that periodically sweep through this area over a period of six years.  On the hill that dominated the small village of Blackmoor, there are the ruins of several previous structures that were destroyed by the Barbarians.  The newer structure incorporates many of the underground galleries of the older structures as well as the main tower which has stood throughout the history of the area.

Excerpt from "The First Fantasy Campaign" (1977) by Dave Arneson

"Robert I, King of all Geneva" no doubt refers to Robert Kuntz, who was described as King Robert (Kuntz) I, of the Castle and Crusade Society, in Domesday Book #1.  The "Empire of Geneva" is mentioned in early campaign letters, (see this post).

In his original Blackmoor games, Arneson used a model castle to represent Blackmoor Castle.  The model kit, and the Italian castle it was based on, came to light in 2010 and can still be purchased on amazon.  You can tour the vicinity on Google Maps. 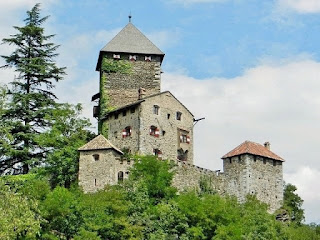 Branzoll Castle in Klausen, Italy (photograph from the tripadvisor website)


Arneson first mentioned the kit in an interview with Kobold Quarterly in 2009, although believed the model was of a castle in Sicily.  He possibly mixed up Chiusa (the Italian name of Klausen in South Tyrol) with Chiusa Sclafani in Sicily.

Dave's daughter, Malia, discovered some old maps of Blackmoor Castle in 2013.  The first floor was reserved for guests, the second for retainers, and the third for the royal family.  The tower portion contained two additional floors. 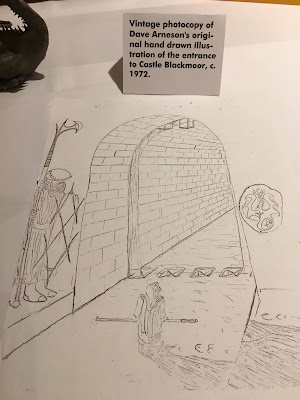 Photograph of Arneson's drawing of the entrance to Blackmoor Castle, part of the "Legends of Wargaming" exhibit at Gary Con XI (Gertie the dragon's tail is also captured, top left)

By mid-1972, the players had so neglected the defense of the town in favor of dungeon exploration, that the castle fell to the invading forces of the Egg of Coot, bringing that phase of the campaign to a close.  In future adventures, the entrance to the dungeon was guarded by elves.

Corner of the Table (vol. 4, no. 6) in Nov/Dec 1972 marks the beginning of the Loch Gloomen adventures, around the time that Arneson and Megarry visited Lake Geneva to demonstrate Blackmoor and Dungeon! to Gygax.
at November 02, 2019