Back in the 1980s, my brother and I enjoyed playing "Dungeon!" when it wasn't possible to play D&D.  We had no idea that the game's origins actually predate D&D, or that it contributed to the latter's inception, not the other way around. 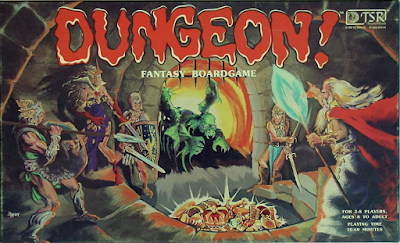 Cover to the Dungeon! fantasy boardgame (1980).  Illustration by Jim Roslof.  The warrior in the bottom left corner seems a homage to the Greg Bell swipe from the cover of the Greyhawk supplement (1975).


David Megarry was inspired by Dave Arneson's "Blackmoor" game to create a board game simulating a dungeon crawl.  He reflects on the history of "Dungeon!" in 40 Years of Dungeon! A conversation with David R. Megarry (2015), by The Fellowship of the Thing.

Megarry was introduced to Gary Gygax by Arneson at Gen Con III in 1970.  He and Arneson would famously drive to Lake Geneva in late 1972 to showcase "Blackmoor" and "Dungeon!" to Gygax.  Soon afterwards, Arneson and Gygax began collaborating on D&D.

Megarry started working on a second version of his game, naming it "The Dungeons of Pasha Cada" (1973), a copy of which came to light in 2011. The first edition of "Dungeon!" was published in 1975.  A revised edition followed in 1980 (the version we used to play).

Daniel Boggs has written about probable sources of inspiration for "Dungeon!" in Dungeon in the Womb of Strategos as well as the game's likely impact on the development of D&D in The Dungeon! Board Game as a Foundation of D&D.

I was fortunate enough to meet David Megarry in 2018.  For the past several years, Megarry has been running sessions of "Dungeon!" at Gary Con for multiple players, on the actual table that Arneson used to run his Blackmoor games. 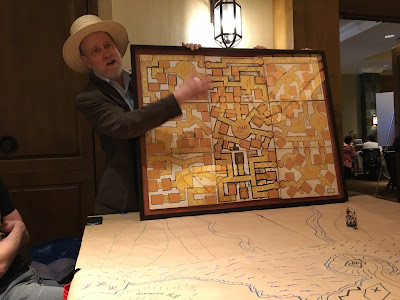 David Megarry explains the development of his board game "Dungeon!" at Gary Con X (March, 2018).


David was a great host, and happy to chat about old times.  At the session's conclusion, each participant was given handmade monster and prize cards in a little slipcase as keepsakes (mine were for the 6th level - a red dragon and a ruby ring worth 4,000 gp).

Incidentally, when I asked him about the long corridor running along one side of the board, he told me that it was originally intended to line up with another game called "Castle", and that a third game "Kingdom" was also planned, presumably to simulate wilderness adventures.

The following year, my son signed up to play in one of Megarry's sessions.  My kids and I have enjoyed playing "Dungeon!" for years, and my son was looking forward to the experience.  Afterwards, he received a very special memento: 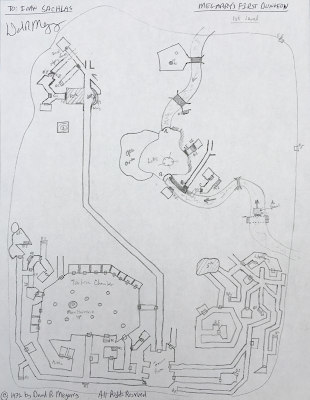 A copy of Megarry's First Dungeon (1972), reproduced with kind permission by David Megarry.


The map is a fascinating piece of the game's history.  It evokes a sense of mystery and adventure, although we were too awestruck to ask about any of its features.  Perhaps David can be enticed to share a few contextual details, at next year's Gary Con.

I recently stayed up late with one of my daughters, long after her sister went to bed, in her quest for the fabled 10,000 gp diamond she had previously glimpsed among the treasure cards for the 6th level.  Her wizard finally left the dungeon with 87,000 gp worth of treasure, including the diamond!

Email ThisBlogThis!Share to TwitterShare to FacebookShare to Pinterest
Labels: Dungeon!