OD&D Dragons: On the Origin of Species

OD&D vol 2: Monsters & Treasure contains a lot of information regarding the different types of dragons, including rules for subdual.  I was always intrigued by the taxonomy of dragons in D&D, although was unaware of the origin of the different colored species.

The red dragon, (Draco Conflagratio, or Draco Horribilis), is clearly modeled after the dragon Smaug from Tolkien's "The Hobbit", and was previously described in Chainmail, while the other colors were only briefly mentioned (white, black, blue, green, and purple/mottled).

In Jon Peterson's Playing at the World, we learn that Gary Gygax wrote a number of articles entitled "Grayte Wourmes" on the different types of colored dragons, for a variant postal "Diplomacy" fanzine Thangorodrim, published by the International Federation of Wargamers. 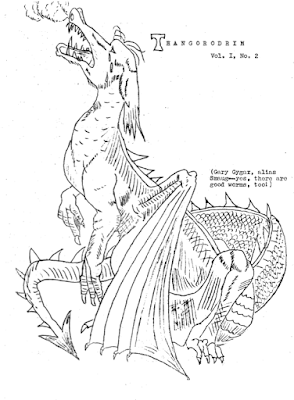 Cover of Thangorodrim, vol 1, no 2 (June, 1969).  The source of the dragon is immediately recognizable to anyone familiar with The Voyage of the Dawn Treader (1952) by C.S. Lewis

Perhaps the rarest of the Great Worms is the Arctic Dragon, or "Frost Breath."  Unlike others of his kind, this large white worm inhabits only the coldest regions of the far north and has no internal fire.  Draco Articus seeks glaciers in which to dwell and if the temperature remains cold enough they will sleep therein for very long period of time, only awakening to feed when stimulated by warmth.  The Arctic Dragon will attack any living creature on sight, often including others of his own species.  Their main weapon is a chilling breath (which will immediately freeze boiling water).  All recorded specimens have only a single head, are up to 100 feet in length, weigh eight tons, and otherwise conform to Dragons in general (wings, fangs, claws, etc.)...  Articus does not usually hoard and is of low intelligence.

Subsequent installments covering the black, green, blue, and purple (mottled) dragon followed.  (Jon Peterson, Playing at the World, 2.5.2 Draco Horribilis).
Copies of Thangorodrim are obtainable on Internet Archive and make for some fascinating reading.  I've reproduced the sections describing the "Grayte Wourmes", below:

The feared Purple Worm (or "Wyrm") became more of a giant earthworm than a dragon.  The entry for sea monsters follows that for purple worms in Monsters & Treasure, which are said to be "equal in size to a Purple Worm" but twice or three times the size are possible. 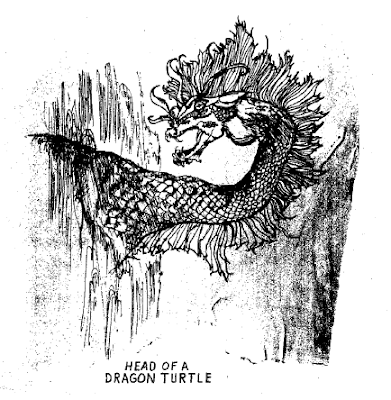 
Last, but certainly not least, the Dragon Turtle is depicted in Monsters & Treasure, but only described in the "Special Suggestions for Monsters in Naval Adventures" section, on page 34 of OD&D vol 3, The Underworld & Wilderness Adventures.
at November 24, 2019