The original G series has inspired multiple expansions, sequels, and homages.  The more notable ones (both official and unofficial) are listed, below: 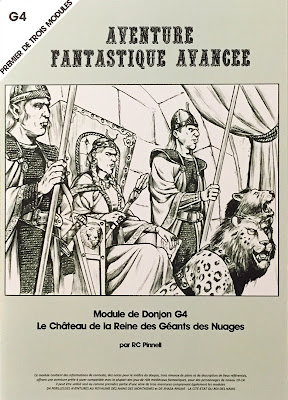 The prolific RC Pinnell wrote a series of giant-based adventures for AD&D 1e, widely regarded as classics of the "old school" movement:

G4: Sanctum of the Stone Giant Lord (reviewed at Grognardia in 2009)
G5: Curse of the Cloud Giant Queen (translated into French, above)
G6: The Forge of the Formorian Smith Lord
G7: Giants of the Deep
G8: Manor of the Mountain Giant King
G9: Secret of the Swamp Giant Steward
G+ The Verbeeg Valley

*see also "G4-9 by RC Pinnell Released for Free in PDF by the Roll For Initiative Podcast" over at Tenkar's Tavern, back in 2015

Vengeance of the Giants: 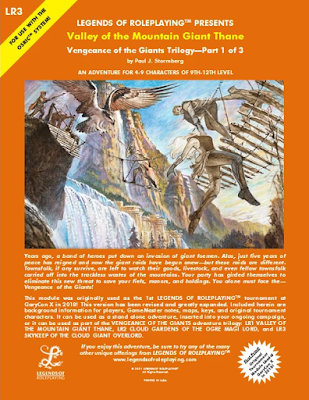 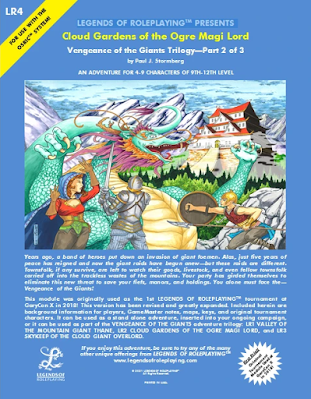 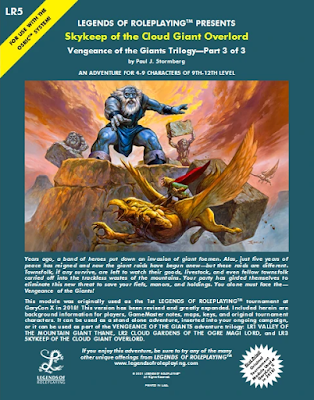 Covers to the forthcoming "Vengeance of the Giants" series of adventures, by Paul J. Stormberg.

Years ago, a band of heroes put down an invasion of giant foemen. Alas, just five years of peace has reigned and now the giant raids have begun anew—but these raids are different. Townsfolk, if any survive, are left to watch their goods, livestock, and even fellow townsfolk carried off into the trackless wastes of the mountains. Your party has girded themselves to eliminate this new threat to save your fiefs, manors, and holdings. You alone must face the—Vengeance of the Giants!

I was fortunate enough to snag a spot on what would ultimately become the winning team, and can honestly state these adventures are pulse-pounding, worthy successors to the originals.
I'm eager to see them released at some point in the near future, and will be sure to review them, here.  (See Legends of Roleplaying Adventures for more details).

The Liberation of Geoff: 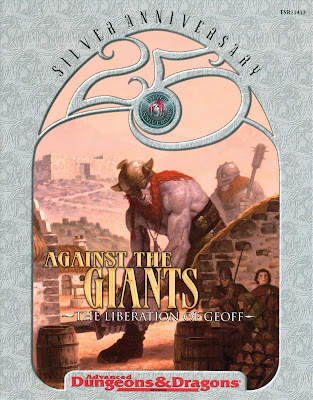 Cover to "Against the Giants: The Liberation of Geoff" (1999) by Sean K. Reynolds.  Illustration by Gerald Brom.

"Against the Giants: The Liberation of Geoff" for AD&D 2e takes place in the World of Greyhawk, a decade after the events in the original G series.

In addition to conversions of the original modules to 2e, the adventure contains G4 "Mount Rungnirheim" (another frost giant lair), G5 "Castle Thrasmotnir" (another fire giant lair), and G6 "Cloud Islands of the Sakhut" (a cloud giant lair).

An RPGA Adventurer's Guild Adventure by John Rateliff, called "Emissaries" (1999) was released as a tie-in to the adventure.

Revenge of the Giants: 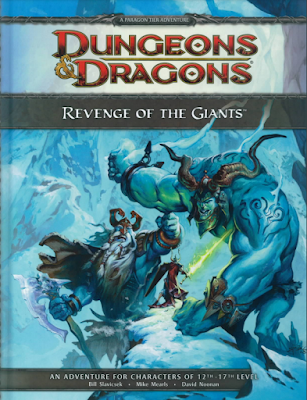 Cover to "Revenge of the Giants" (2009) by Bill Slavicsek, Mike Mearls, and David Noonan.  Illustration by Jesper Ejsing.

"Revenge of the Giants" is a 4e homage to the original G series.  The adventure was designed as part of the "Points of Light" or Nentir Vale setting for 4e, near the east end of Lake Nen.

at May 09, 2021
Email ThisBlogThis!Share to TwitterShare to FacebookShare to Pinterest
Labels: Greyhawk