Source of the Nile

The "Source of the Nile" board game, by Twin Cities wargamers Ross Maker and David Wesely, won the Charles S. Roberts Awards at Origins 78 for "Best Pre-20th Century Game of 1978" and "Best Amateur Game of 1978". 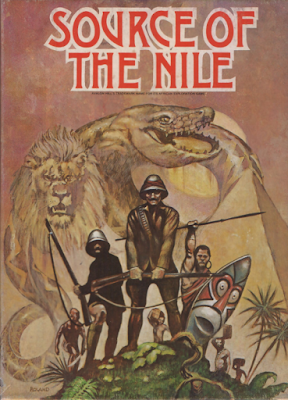 Cover to "Source of the Nile" board game (Avalon Hill, 1979), originally published by Discovery Games in 1977.

The game involves a hex crawl through the unexplored interior of Africa, and seems at least partly inspired by "Outdoor Survival", although contents of individual hexes are randomly determined, and so differ from game to game (and an actual map of Africa). 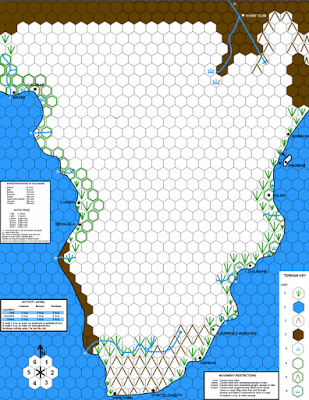 Board from "Source of the Nile", representing Africa in 1821.  Note similarities to players maps in modules X1 "The Isle of Dread" and X6 "Quagmire!"

Gary Gygax provided a favorable review in The Dragon #20 (November, 1978), along with suggested improvements, including a proposed "native tribe facts sheet" (complete with tribal name generator).

Tribal name generator, from The Dragon #20

David Wesely responded with "Search for the Nile Revisited: Designer's Notes, Addenda, Clarifications & Response" in The Dragon #21 (December, 1978).  A supplement "Tributary" was released in December, 1978.

J. Eric Holmes, editor of the original Basic Set, contributed a "fantasy supplement" (to be covered in greater detail, tomorrow) in The Dragon #24 (April, 1979).  Turn sequence flowcharts were published in The Dragon #29 (September, 1979).

Classic accounts of 19th century explorers are downloadable at archive.org:

Explorations and Adventures in Equatorial Africa: with Accounts of the Manners and Customs of the People, and of the Chase of the Gorilla, Crocodile, and other Animals (1862), by Paul B. Du Chaillu.

A Journey to Ashango-land: and further penetration into Equatorial Africa (1867), by Paul B. Du Chaillu.

Through the Dark continent, or, The sources of the Nile: around the great lakes of equatorial Africa and down the Livingstone River to the Atlantic Ocean, vol. 1, vol. 2, (1878), by Henry M. Stanley.

Heroes of the Dark Continent and How Stanley Found Emin Pasha (1889). by James W. Buel.

In Savage Africa: or, The Adventures of Frank Baldwin from the Gold Coast to Zanzibar (1894), by Verney Lovett Cameron.

The late 19th century European colonization of Africa is an important period of our shared global history to understand.  I would suggest reading King Leopold's Ghost (or alternately viewing the 2006 documentary) for a sobering contemporary analysis.
at May 29, 2021
Email ThisBlogThis!Share to TwitterShare to FacebookShare to Pinterest
Labels: BECMI