The game gives a vivid feel for the danger and excitement of exploration in the nineteenth century. What it was missing, I thought, were the kind of encounters that Allan Quartermain or Lord Greystoke would have had under similar circumstances. So, for the fantasy fans, like myself, who enjoy the game but would like to have the kind of adventures one would find in the works of H. Rider Haggard or Edgar Rice Burroughs, and with all respect for Maker and Wesely’s fine game, I offer the Fantasy Supplement: Lost civilization in Source of the Nile.

Holmes was a lifelong fan of the works of Edgar Rice Burroughs (he even got the chance to meet Burroughs while both were living in Hawaii, at which time Burroughs autographed his copy of "Tarzan and the Leopard Men").

Holmes later wrote an authorized Burroughs pastiche "Mahars of Pellucidar" (1976), followed by a sequel "Red Axe of Pellucidar" which was never published, (although we may see a posthumous release in the near future). 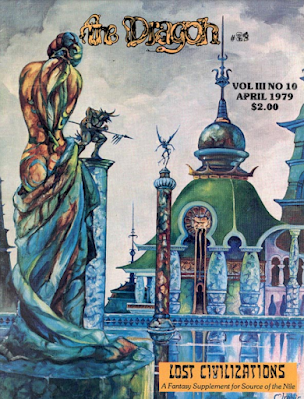 Cover to The Dragon #24 (April, 1979).  Illustration by "Elrohir", a pseudonym used by artist Kenneth Rahman.

I was scheduled to play "Source of the Nile" with none other than Ross Maker at Gary Con XII, before it got canceled, and so signed up for a virtual session as part of Virtual Gary Con XII.  Our host used Holmes' rules for lost civilizations, which greatly enhanced the game.

English novelist H. Rider Haggard is widely credited as the originator of the "lost world" genre.  Much of his work is in the public domain, accessible on Project Gutenberg:

Haggard went on to write several more stories involving Allan Quatermain (from "King Solomon's Mines") and Ayesha, or "She who must be obeyed". 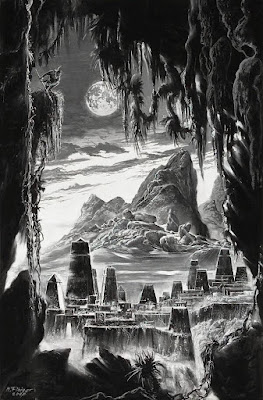 "Tarzan and the Ancient City" by Milan Fibiger, from the portfolio "Tarzan as Art" (2007).

Edgar Rice Burroughs, the "master of the pulps" owes a literary debt to Haggard, and was a naturally gifted storyteller, influencing countless other writers (including Robert E Howard).

Burroughs' "Tarzan" tales* are filled with lost cities, such as Opar, forgotten outpost of sunken Atlantis, and the twin cities of Cathne, City of Gold, and Athne, City of Ivory.

*the Tarzan novels are presently being re-issued as part of the Edgar Rice Burroughs Authorized Library, complete with extras and stunning painted covers by Joe Jusko.

at May 30, 2021
Email ThisBlogThis!Share to TwitterShare to FacebookShare to Pinterest
Labels: ERB, Holmes