Gen Con XI was held in August, 1978 on the Parkside Campus of the University of Wisconsin.*  Its D&D tournament was based on the D-series of A/D&D modules, which were available for purchase at the con, afterwards. 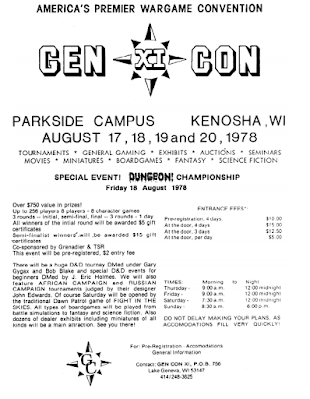 Gary Gygax discussed the Gen Con XI tourney in a guest editorial "MDG shows ORIGINS (and GENCON) how to run a tournament" in The Dragon #19 (October, 1978)

GenCon XI had the largest D&D tournament ever run. That same event has come in for a lot of more criticism, some justified and some not. The biggest rap against it was its sanguine nature; only one group survived RD Two. The reason behind the high mortality rate was players’ misconceptions, mostly.  Too many groups adopted the “hack and chop” mentality, and ran into far more than they bargained for. This tourney relied far more on cunning and stealth than brawn and guts. Too many groups failed to heed their directives, and paid the price.

One rap against the event does hold up; it was chaotically run, though Bob Blake did as good as can be reasonably expected of any mortal. There were scoring errors, and there were other errors as well. An article in this issue explains it better than I could.  Most of the organizational screw-ups were a result of bad communications between PAW and the tournament people, and none were fatal.

The first round of the tournament used the Shrine of the Kuo-Toa from module D2, while the second and third rounds were from module D3.
Bob Blake provided his analysis of the competition in "How Many Ettins is a Fire Giant Worth: Competitive D&D" in the same issue:

The D&D tournament at GenCon XI posed a different problem.  We used Advanced D&D Modules D2 and D3 for the scenario, and the adventurers were to follow the trail of the Drow from Module G3 through the vast system of underground labyrinths the Drow call home.  The trail led them to the Shrine of the Duo-Tao (D2), through which there was only one way to pass unscathed, and this was worth a considerable number of points. Any other approach resulted in fighting with the Kuo-Tao. If the party eventually passed through the shrine. they received points for doing so, but not as many as a “perfect” team, and additional points for slaying Kuo-Toa, the rationale being that the fish people and the party mutually disliked each other. But besides this, not much was known on the surface of this race, and any information the party could take with them regarding their strengths and weaknesses would be of value, hence points for tournament considerations. A survivor multiplier was also used, casualties being counted as those slain outright or captured and hauled away for eventual sacrifice.

Round two of the tournament shot my scoring system all to ____ (pick your favorite outer plane). Briefly, each team but one ran into a horrible encounter with a demon and died. That one team managed to survive that encounter with but one casualty and continued on, so they were declared the winners. But the difficult problem was what to do with the others; the winners had a bye in the third round, but second and third place slots were left to be filled. What had to be done was to have that DM meeting, hash over each team’s performance, then pick two teams to vie for second place. Previously in this article I mentioned the shortcomings of the subjective approach (which were my pre-formed opinions of the method), one I’ve never used in a tournament before and one I’ll never use again, if at all possible, considering how difficult it was to choose the advancing teams. I do believe we picked the two best teams, but I would have much preferred to have used some other means. A prime example of Murphy’s Law. 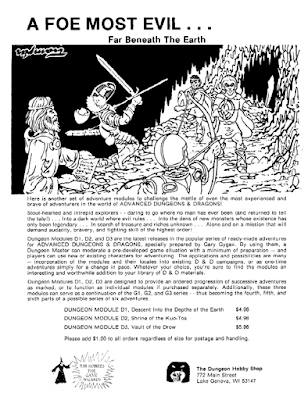 Advertisement for the D series of adventures in The Dragon #20 (November, 1978).

I didn't get a chance to run the D series for my son and his friends, after they'd completed the G series (sadly, it's unlikely that we'll ever get the chance, given the prolonged hiatus).

The Drow were originally mentioned in the AD&D 1e Monster Manual, published the previous year:

The "Black Elves," or drow, are only legend. They purportedly dwell deep beneath the surface in a strange subterranean realm. The drow are said to be as dark as faeries are bright and as evil as the latter are good. Tales picture them as weak fighters but strong magic-users. 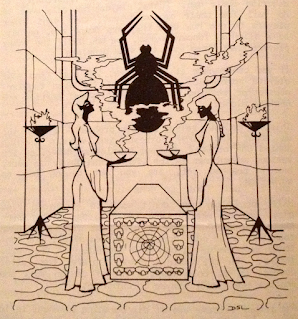 Gygax discussed potential inspirations for the race, in "Books Are Books, and Games Are Games, and Never the Twain..." from The Dragon #31 (November, 1979)

The three “D Series” modules which continue the former series owe little, if anything, to fiction. Drow are mentioned in Keightley’s THE FAIRY MYTHOLOGY, as I recall (it might have been THE SECRET COMMONWEALTH — neither book is before me, and it is not all that important anyway), and as Dark Elves of evil nature, they served as an ideal basis for the creation of a unique new mythos designed especially for AD&D.

As has been noted elsewhere, "drow" aren't specifically mentioned in either work,* and may possibly owe their origins to the svartálfar ("black elves") or dökkálfar ("dark elves") of Norse myth.
*"The Fairy Mythology" (1892) by Thomas Keightley is downloadable, here, and "The Secret Commonwealth of Elves, Fauns and Fairies" (1893) by Robert Kirk, with commentary by Andrew Lang, is downloadable, here.  Both are worth a browse.

*the D1-2 version included the Gen Con XI pregens (with names derived from "Poplollies and Bellibones: A Celebration of Lost Words" (1977), with only two re-appearing from the G series

A novelization of the series by Paul Kidd was released in 2000 as part of TSR's 25th anniversary.  The setting was the World of Greyhawk, although the original modules were generic and could be situated anywhere.

The OD&D concept of the megadungeon gave way to AD&D 1e's ecosystem of the Underdark, covered in greater detail in the "Dungeoneer's Survival Guide" (1986). 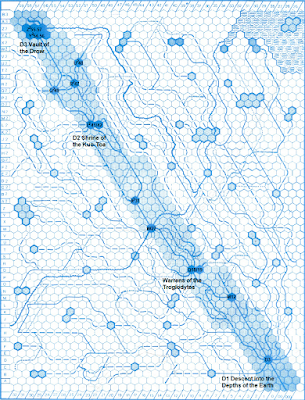 The area shaded in the map above is the players' map.  The PCs begin at the bottom right, and travel to the top left.  (See this alternative players' map, from the Blog of Exalted Deeds.)

The large number of unkeyed areas have been the focus of a Dragonsfoot Collaborative Project: Mapping the Depths of the Earth, updated here.

The article "The Vault of the Drow" by Frederick Weining, published in Dragon 298 (August, 2002) is highly regarded as an excellent resource for adding detail to the city of Erelhei-Cinlu.*

*a name derived by using the first few letters of each of the names of Gygax's first five children (Ernie, Elise, Heidi, Cindy, and Luke)

Jason B. Thompson created a D&D walkthrough map for D3 - Vault of the Drow, in addition to those for the G series (link is to WotC's web page).

Finally, I was intrigued to learn of the development of a Diplomacy variant called Drowmacy, playtested at Gary Con X in 2018.

Update (February 9, 2022): be sure to check out D4: City of Spiders, by Joseph Block, an urban follow-up adventure to D3 Vault of the Drow, set in Erelhei-Cinlu

at May 15, 2021
Email ThisBlogThis!Share to TwitterShare to FacebookShare to Pinterest
Labels: Greyhawk