Origins 78 (Origins IV), sponsored by Metro Detroit Gamers, was held in Ann Arbor, Michigan in July, 1978.  A watershed convention, its now legendary D&D tournament formed the basis of the G-series of A/D&D modules. 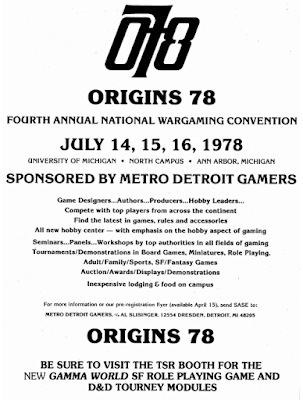 TD #19 will contain a report on the massive D&D tourney; it will contain insights into the scoring system, judges guidelines, and such, as well as some accounts of what actually happened. The tournament was conducted with the three new modules that TSR has produced and now has commercially available. The winning team had two ladies on it, both of them capable players. I know just how good the winning group was because I had them for Rd. Two.

Tim Kask, The Dragon #18
Bob Blake, organizer of the two previous Gen Con tournaments, explained the scoring system in "How Many Ettins is a Fire Giant Worth: Competitive D&D" in The Dragon #19 (October, 1978):

At Origins 78 we used Advanced D&D Modules G1-G3, and the scenario was such that the party had two objectives in each round; kill as many giants as possible, plus discover, by way of clues, who was behind the uprising of the giants. With these things in mind, I developed the following scoring system:

“G” was giant kill points, “R” was the number of rooms examined times the room value in that module (this was a measure of the verve with which a team pursued its objective), “C" was the value of clues found, “S” was the number of survivors in the party, and “VP” was victory points. Point weighting was as follows: the total room value plus the total clue value was equal to the total giant value available to be slain in that module of the adventure.

A detailed play-by-play submitted by the winning team (interspersed with editorial comments by the DMs for each round) was featured in "The Battle for Snurre's Hall" in The Dragon #19 (October, 1978).

The three individual rounds of the tournament were published as modules G1 "Steading of the Giant Chief", G2 "The Glacial Rift of the Frost Giant Jarl", and G3 "Hall of the Fire Giant King" as advertised in The Dragon #19: 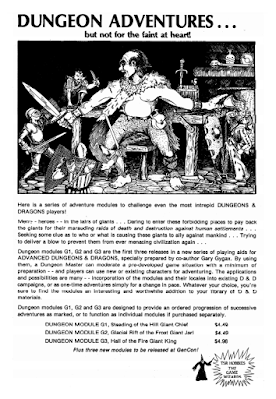 Advertisement for the G series of adventures in The Dragon #19 (October, 1978).

A few years ago, I ran my son and his friends through the series (posting their progress with tactical illustrations in a Campaign Journal over on Dragonsfoot from 2016-18), but never got around to sharing their final three sessions.
Literary Sources:
The G-series modules were inspired by the world of Norse mythology as presented in "The Roaring Trumpet", the first of the "Harold Shea" stories by Fletcher Pratt and L. Sprague deCamp. 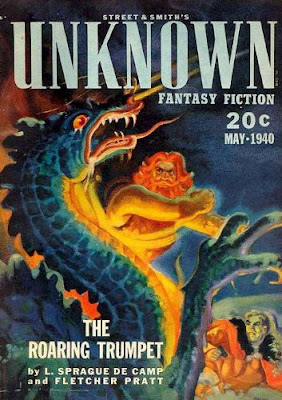 "The Roaring Trumpet" was first published in "Unknown Fantasy Fiction" in May, 1940, followed by "The Mathematics of Magic" in August.  The two stories were collected together as "The Incomplete Enchanter" in 1941.

For more on the Norse and folkloric roots of the G series, Kent David Kelly's excellent A Grim Saga of Giant Foemen (originally intended for Gygax magazine, although subsequently posted on Dragonsfoot in 2016) is required reading.

The collected adventures were re-released as G1-2-3 "Against The Giants" (1981)* and revised and expanded somewhat in GDQ1-7 "Queen of the Spiders" (1986) a 128-page supermodule (containing some useful new bits).

*the 1981 version included the original pregens (with names derived from "Poplollies and Bellibones: A Celebration of Lost Words" (1977)

A novelization of the G series by Ru Emerson was released in 1999 as part of TSR's 25th anniversary.  The setting was the World of Greyhawk, although the original modules were generic and could be situated anywhere.

*the excellent, full-color maps by Mike Schley can be purchased for download, here.

An illustration of King Snurre by Tyler Jacobson was featured on the cover of the D&D 5e Player's Handbook (2014).  For those wishing to run these classic adventures using 5e, a conversion was included in "Tales from the Yawning Portal", published in 2017.

If you haven't yet seen them, be sure to check out Jason B. Thompson's D&D walkthrough maps for the G series, commissioned by Wizards of the Coast, a few years back (links below are to WotC's web pages, which are difficult to find):

Since the G series were the first dungeon modules to be published by TSR, their minimalist nature renders them easy to run for a Holmes-based, B/X, or BECMI campaign (I've previously shared suggestions for retrofitting G1 and G2 to OD&D). 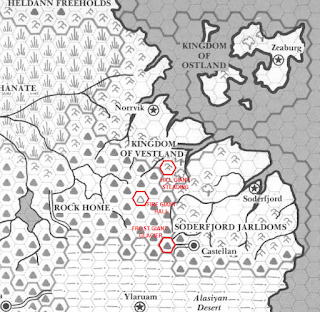 Suggested locations for running the G series on the continental setting for B/X.

For the Mystara fans among you, I've provided advice on Setting module G1-2-3/Against the Giants in the Northern Reaches (link to Vaults of Pandius, from my article on "Adapting Classic AD&D Modules to a Mystara Campaign" published in Threshold #22 (March, 2019).

at May 08, 2021
Email ThisBlogThis!Share to TwitterShare to FacebookShare to Pinterest
Labels: Greyhawk, Mystara, OD&D