T1: The Village of Hommlet

T1 "The Village of Hommlet" by Gary Gygax was TSR's tenth "Dungeon Module" (not counting the special collector's edition of "Lost Tamoachan"), and was originally made available for sale at Gen Con XII in August, 1979, (along with S2 "White Plume Mountain"). 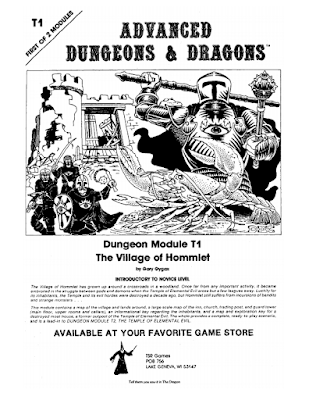 Full-page advertisement for module T1 "The Village of Hommlet" appearing in The Dragon #s 31-32 (November-December, 1979)

Like module B1 "In Search of the Unknown" and S2 "White Plume Mountain", T1 "The Village of Hommlet" wasn't based on a previous tournament adventure.  Bob Byrne recounts its gaming origins in a post on Black Gate, in 2017:

Gygax’ son and a friend were starting to play, so Gary used the Hommlet campaign as a new, low level adventure for them, distinguishing it from the high level Greyhawk play. Gygax was busy developing TSR products and the Greyhawk Supplement (I) had come out for the Original Rules.

The Hommlet campaign was different than the Greyhawk dungeon delves. There was a village, with a smithy, an inn, a local elder, set in a rural environment. The party could role play in the village then move on to the dungeons of the Temple. It’s possible that Gygax ran players through some iterations of Hommlet and the Temple in late 1975 and into 1976.

*Byrne's article provides a comprehensive overview of the original Temple of Elemental Evil campaign, and is well worth a read.  (There are also links to several other articles on Black Gate regarding the Village of Hommlet and Temple of Elemental Evil).
Gygax set aside his DMing responsibilities in 1976 in order to work on the AD&D rulebooks, in addition to penning the first seven dungeon modules (the G series, the D series, and S1), before turning to the ambitious World of Greyhawk folio.
Modules S1, B1, and S2 included references to the World of Greyhawk, which was originally planned for release in early 1979.  Gygax provided even more details in module T1, rendering it a perfect starting place for campaigns in the soon-to-be-published setting.

The first Gen Con was held back in 1968, where Gygax played The Siege of Bodenburg, a medieval miniatures wargame.  He subsequently used Bodenburg Castle to represent the ruined upper works of Greyhawk Castle, as well as the floorplan of the moathouse in module T1.

Schematic for Bodenburg Castle (left) and the map for the ruined moathouse from module T1 "The Village of Hommlet" (right).

The destruction of the moathouse as recounted in "The Village of Hommlet" was apparently based on the Siege of Bodenburg, and has been recreated as a Chainmail scenario "The Battle for the Moathouse" by Paul Stormberg.

The Temple of Elemental Evil:

T1 was re-released in 1981 as a color version, with new front and back cover art, although the promised T2 "The Temple of Elemental Evil" wasn't forthcoming.

After finishing T1, Gygax was approached by Brian Blume to write a replacement module for the Holmes Basic Set, which became B2 "The Keep on the Borderlands".  (Had Blume not done so, I wonder if Gygax would have instead written T2 "The Temple of Elemental Evil"?)

Without T2, I've posted elsewhere that B2 works well as a sequel to T1.  One could even continue with WG4 "The Forgotten Temple of Tharizdun" as a Gygaxian trilogy of sorts.

The Moathouse:
The cover to D&D accessory AC5 "Player Character Record Sheets" (1984) features an illustration by Clyde Caldwell depicting a group of adventurers approaching the ruined moathouse from T1 "The Village of Hommlet". 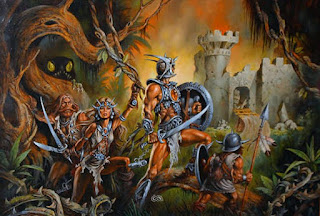 I corresponded with Caldwell back in 2010 about this illustration, at which time he kindly responded with some additional details:

According to this interview on the Random Wizard blog, Caldwell probably began working at TSR around July, 1983.  Given that it depicts a scene from T1, "The Moathouse" may have been intended for the cover of a renumbered module WG1.*
*in Dragon #71 (March, 1983) Gygax stated "Pending work which will eventually be done includes the Temple of Elemental Evil (formerly designated as module T2 but which will be released as WG 2, part 1 and 2)"

A novelization of the adventure "The Temple of Elemental Evil" by Thomas M. Reid was published in 2001, as part of the "Greyhawk Classics" series.

A sequel for 3e "Return to the Temple of Elemental Evil" by Monte Cook was released in 2001, set 15 years after the original adventure.

The Temple of Elemental Evil was also developed as a video game by Atari, in 2003.

Hackmaster published "The Temple of Existential Evil" by Brian Jelke in 2003.

"Return to the Moathouse" by Mike Mearls was released at the Origins Game Fair in 2008, and a 4e conversion of "The Village of Hommlet" by Andy Collins was published in 2009, and republished in Dungeon #212 (March, 2013).

A "Dungeons & Dragons: Temple of Elemental Evil Board Game" was released by Wizards of the Coast in 2015.

Finally, a two-volume homage and 5e conversion was just released by Goodman Games as Original Adventures Reincarnated #6 (be sure to check out the recently posted unboxing video for a sneak peak at the contents).

The Deed of Paksenarrion:

It has been pointed out that "Divided Allegiance" (1988), the second book in "The Deed of Paksenarrion" by Elizabeth Moon contains many parallels to T1 "The Village of Hommlet" (as discussed in this post from The Mule Abides blog)

at September 18, 2021
Email ThisBlogThis!Share to TwitterShare to FacebookShare to Pinterest
Labels: Chainmail, Greyhawk