S2 "White Plume Mountain" by Lawrence Schick was TSR's ninth "Dungeon Module" (not counting the special collector's edition of "Lost Tamoachan"), and was originally made available for sale at Gen Con XII in August, 1979, (along with T1 "The Village of Hommlet"). 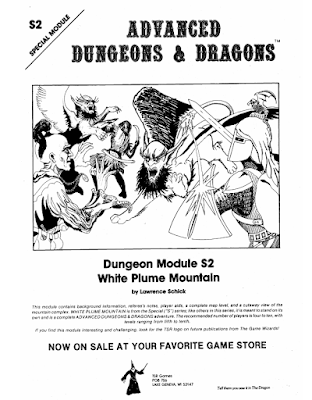 As with module B1 "In Search of the Unknown", and unlike the modules preceding them, "White Plume Mountain" wasn't based on a tournament adventure.  Schick explains its unusual origins in an interview on Grognardia, back in 2009:

You're the author of White Plume Mountain, which remains one of the most famous of all AD&D modules ever produced, both because of its many unique puzzles and traps, as well as the presence of magic sword Blackrazor. What were your inspirations in creating this adventure?

White Plume Mountain was written as a sample document to persuade TSR to hire me as a game designer. I just plundered all the dungeons I’d designed over the previous four years, took out the best bits, and cobbled it all together. It worked; TSR hired me, bought the scenario, and published it as a module without changing a word. I’m a little embarrassed to this day by Blackrazor, inasmuch as it’s such a blatant rip-off of Elric’s Stormbringer; I would not have put it into the scenario if I ever thought it might be published.

As a puzzle dungeon, "White Plume Mountain" is in a class of its own, although in the same vein as the AD&D Masters Tournaments held at Winter Fantasy II "The Quest for the Holy Grrale" (see The Dragon #22, pg 31) and Gen Con XII "Doomkeep" (see The Dragon #34).
Greyhawk:
Another similarity to module B1 "In Search of the Unknown" is the inclusion of geographic references to the forthcoming "World of Greyhawk" (1980) folio:

White Plume Mountain is located in the northeastern part of the Shield Lands, near the Bandit Kingdoms and the Great Rift (see WORLD OF GREYHAWK, available from TSR)

The Shield Lands lie north of the Lake of Unknown Depths, the module stating that White Plume Mountain "stands alone in a vast area of dismal moors and tangled thickets".
The Known World:
Back in 2015, Schick shared the "secret history" of the D&D Known World (which ultimately became the Mystara setting).  Interestingly, the name of one of the "Thyatic" cities was borrowed for the villainous wizard in "White Plume Mountain": 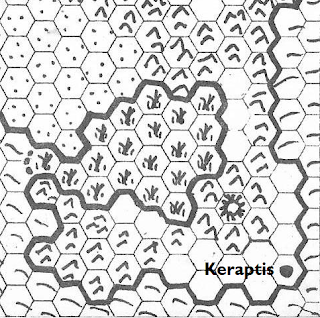 Location of the city of Keraptis in the original "Known World" setting.  (I'm not certain what the circular map symbol to the northwest represents.)

Given Schick's long history of collaboration with Tom Moldvay, it's perhaps not surprising that "White Plume Mountain" has a strong B/X vibe, having more in common with adventures such as X2 "Castle Amber" than other AD&D modules.

(I'd situate the adventure somewhere in the Republic of Darokin, or possibly the Broken Lands, if I were to use the Known World or Mystara setting).

The original module was re-released in 1981 as a color version, with new front and back cover art (see also The Art of the Genre).  The new version included a now iconic full-page map of White Plume Mountain and its environs,* by Erol Otus.

A sequel for 2e "Return to White Plume Mountain" by Bruce R. Cordell was released in 1999 as part of D&D's 25th anniversary, set 20 years after the original.

A d20 version by Andy Collins, Gwendolyn F. M. Kestrel, and James Wyatt, using material from the "Weapons of Legacy" system, was published in 2005.  This was followed by a d20 supplement "Outside the Mountain is just as Dangerous as Inside" by Robert Wiese.

at September 11, 2021
Email ThisBlogThis!Share to TwitterShare to FacebookShare to Pinterest
Labels: Mystara