B1: In Search of the Unknown

B1 "In Search of the Unknown" by Mike Carr was TSR's eighth "Dungeon Module" (following close upon the heels of G1-3, D1-3, and S1, all published in 1978).  The introductory adventure replaced Dungeon Geomorphs in the Basic Set and was also sold separately. 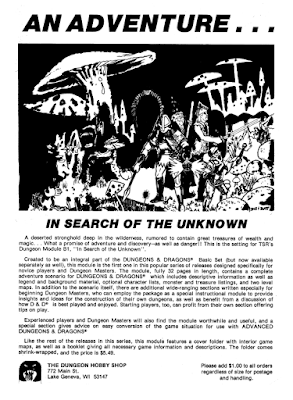 "In Search of the Unknown" has been discussed extensively on internet blogs and forums (see the Dragonsfoot index, here).  One fan constructed an impressive 28mm scale model of the first level.  The module has even inspired a rock ballad.

According to an interview with Mike Carr on the Save or Die podcast (December 4, 2010), the background wasn't based on any pre-existing adventure or campaign setting, but rather invented out of whole cloth, an exercise in rational dungeon design.*

*the construction of underground fortresses is a logical extension of a world in which magic actually works, as outlined by Lewis Pulsipher in his article "Castles in the Air: Why dungeons exist" published in White Dwarf #42 (June, 1983)

Despite having been written specifically for inclusion in the original Basic Set, I've previously argued that "In Search of the Unknown" might actually be considered an OD&D module, as reflected by the classes of its pregenerated characters: 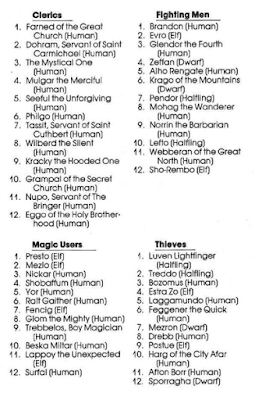 Pregenerated characters from the "monochrome" version of module B1 "In Search of the Unknown".  Note elven fighting men and magic-users, as well as demi-human thieves, in keeping with OD&D as opposed to Holmes Basic.

The revised B/X "color" version of the module removed many (but not all) of these "OD&Disms" ("magic mouth" does not appear in the 1981 D&D Basic Rulebook edited by Tom Moldvay, but is listed as a spell in Table B on pg 29).
The Caverns of Quasqueton:

In designing the dungeon, Carr drew from ideas suggested in OD&D vol. 3 The Underworld & Wilderness Adventures as discussed in Deconstructing Quasqueton, back in 2013 on the OD&D Discussion boards.

The use of caged fire beetles as a source of light in the library of Quasqueton was previously observed in the great cavern hall of the jarl in module G2 "The Glacial Rift of The Frost Giant Jarl" (1978) by Gary Gygax.
As is now recognized, Quasqueton is the name of an actual city in Iowa.  The name is derived from "Quasquetuk" (meaning "swift running water"), the name of an Indian settlement where several trails converged near a ford on the west side of the river.
(Carr worked as the assistant manager of a restaurant in Cedar Rapids, Iowa, 35 miles south of Quasqueton, prior to moving to Lake Geneva in March, 1976 to work at TSR.)
Keying the Dungeon:
A list of monsters and treasures are provided so that novice DMs can practice stocking the dungeon (my own version is downloadable, here) although there's no need to limit the choices to the ones provided.
"In Search of the Unknown" is perhaps the most versatile module ever published (best demonstrated by Mike Badolato whenever he runs the adventure at NTRPG con).  The Caverns of Quasqueton serve as a blank canvas, releasing the imagination of the DM.

(Most recently, I've been working on a version of the adventure in which the PCs travel back in time to when Rogahn and Zelligar still occupied their fortress, and are compelled to accompany the famed duo on their ill-fated foray to barbarian lands...) 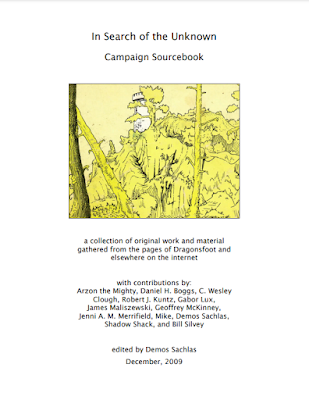 The "In Search of the Unknown" Campaign Sourcebook (2009).  A collaborative effort by fans of module B1.

B1 Campaign Sourcebook:
It's been over a decade since a group of us compiled the B1 Campaign Sourcebook, (kindly reviewed here, back in 2019), which is greatly in need of a revised, updated version.  I'm currently working on a project I'm calling the "B1 Companion" (details forthcoming).
at March 06, 2021