B1 "In Search of the Unknown" has inspired multiple homages and conversions to related game systems.  These provide a wealth of ideas for DMs running the classic module, or can be run on their own.

The mystery surrounding the disappearance of the two legendary inhabitants of the Caverns of Quasqueton has also resulted in two notable sequels to the original adventure, covered in greater depth, tomorrow.

B1 Quest for the Unknown: 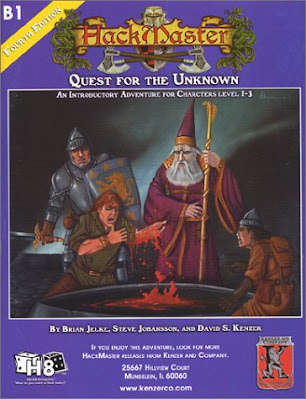 Cover to B1 "Quest for the Unknown" (2002) by Brian Jelke, Steve Johansson, and David S. Kenzer.  Illustration by Stacy Drum.

Hackmaster "4e" (2001) was the original, tongue-in-cheek version of the HackMaster RPG, inspired by AD&D 1e/2e.  Several modules based on classic D&D/AD&D modules were released, including B1 "Quest for the Unknown".
In the Hackmaster version, Quasqueton has been transplanted to Garweeze Wurld, the Hackmaster analog to AD&D's World of Greyhawk.  Rogahn and Zelligar have only been absent for months, not years, and a new subplot is introduced.

While including an element of parody, the adventure is filled with several interesting twists and ideas based on the source material, (the spiral, dead-end corridor leads to the ruins of the lookout tower, for example, something I hadn't been aware of).

Although many sections are taken verbatim from the original module, the text is heavily paraphrased, and includes a fair amount of useful new material, (such as a whole page devoted to books that can be found in the library). 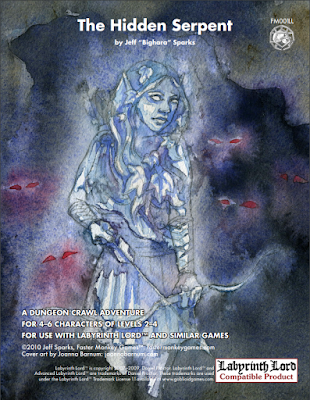 Cover to "The Hidden Serpent" (2010) by Jeff "Bighara" Sparks.  Illustration by Joanna Barnum

Labyrinth Lord (2007) is a retroclone of the 1981 B/X rules.  "The Hidden Serpent" is an adventure inspired by B1 "In Search of the Unknown", although considerably more challenging than its predecessor.

Rogar and Zeglin are a pair of mercenary warlords.  Their underground fortress is named "Quazkyton", which is Draconic for "hidden serpent" in reference to their swift attacks from a hidden base of operations.

A rough map is included as a player handout, along with a few wilderness encounters before access to the stronghold can be gained.  Although inspired by the Caverns of Quasqueton, the layout has been reorganized.

Multiple factions and subplots are provided, which make for a dynamic and action-filled scenario.  "The Hidden Serpent" is a hidden gem, and can be plunked into any campaign with a minimum of changes.

DW1 Lair of the Unknown: 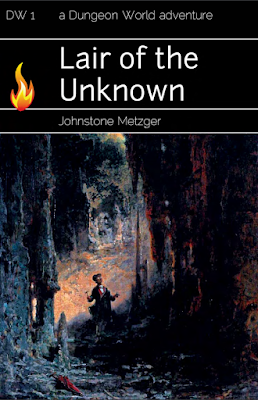 Dungeon World (2012) is an RPG inspired by Powered by the Apocalypse.  DW1 "Lair of the Unknown" is intended as an introduction to the system, in the spirit of B1 "In Search of the Unknown".

Fearsome Forbus and the Unknown Wizard "two of the greatest dungeon raiders that ever lived" were slain by the evil wizard Zamzomarr while constructing their subterranean fortress of Xallevyrx, deep within the Haunted Forest.

Metzger has devised an evocative setting for his dungeon delve.  A 17-page preview of the 110-page book is downloadable here. 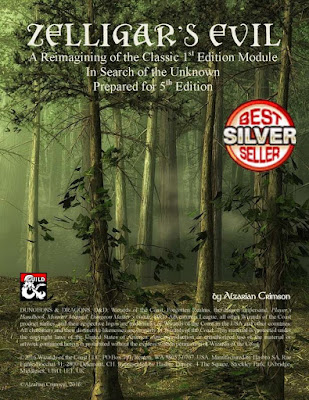 A 5e conversion of the classic adventure, transplanted to the Forgotten Realms, in central Chessenta south of Luthcheq, between the Maerthwatch and Methwood, in the Third Age.
In this version, Rogahn and Zelligar disappeared 32 years ago, after leading a mercenary army into the Maerthwatch mountains.  Zelligar is cast as an evil necromancer, and the adventure involves darker themes than in the original version.

"Zelligar's Evil" was originally developed for use with Fantasy Grounds and comes with digital maps as well as player handouts, including books from Zelligar's library. 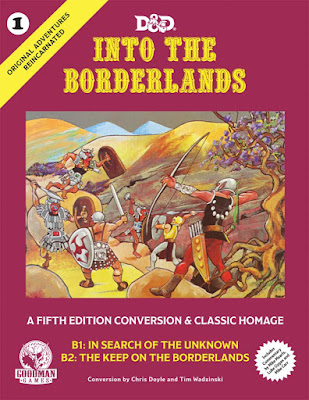 A repackaging of the original versions of modules B1 and B2, together with introductory retrospectives, as well as detailed conversions to 5e by Chris Doyle and Tim Wadzinski.
The maps for both levels of the Caverns of Quaqueton include minor modifications, and there is also a map of the lookout tower, in addition to two new areas on the lower level (the hidden tomb of Rogahn, and a secret sanctuary for Zelligar).
As with previous updates and conversions, new subplots are introduced, one of which connects the adventure to module B2.  (You can read my review of OAR #1, here).
at March 20, 2021