One of the greatest aspects of module B1 "In Search of the Unknown" is how readily the Caverns of Quasqueton lend themselves to expansion.

Access to the lookout tower, a tesseract among the maze of doors, and random actions for the statue on the lower level were previously discussed in B1 expansion ideas on Dragonsfoot, back in 2013.  Here are some additional ideas:

Zelligar's Diary:
Among the stack of books in Zelligar's closet:

This volume appears unremarkable at first glance, seeming to be a notebook with many handwritten entries of undecipherable runes and markings. It is actually a diary kept by Zelligar, and it details one of his adventures from the distant past, written in his own hand. The writing is not discernible unless a read languages spell is used.

This journal kept by Zelligar is a remarkable find, and can be used as the lead-in to the next adventure.  Does it describe the whereabouts of the Tomb of Horrors?  Did Rogahn and Zelligar discover The Lost Caverns of Tsojconth?  Or does it recount an Expedition to the Barrier Peaks?

The larger jar is of clear glass and seemingly contains a black cat's body floating in a clear, colorless liquid. If the large cork lid is unstopped, the liquid will instantaneously evaporate, the cat will suddenly spring to life, jump out of the jar, meow loudly, and run for the door. If the door is open, the cat will dash through and disappear. If the door is not open, the cat will be seen to pass through the door and disappear. In neither case will the feline be seen again.

"Zelligar's cat" is a memorable feature of module B1.  My take on it was that the cat is a "phase cat" and also Zelligar's familiar.  Releasing it sets in motion a chain of events that ultimately results in Rogahn and Zelligar's return.

Another (more gruesome) explanation is described in Jon's D&D Vlog #19.  Jon pursues his idea to its logical conclusion, worth checking out.

Accessible only through a secret door in the Room of Pools, the chamber of Marevak, advisor to Zelligar and Rogahn, contains various documents:

The desk in the room is mostly empty, except for several attached sheets with various notes written in elfin. The first sheet is headed with the title, "Suggestions for the Further Development of Quasqueton," and the notes relate to certain details of construction for the stronghold (although there is no information of a sort to assist the adventurers, and no maps). The document (discernible only by those who know the elfin language or by a read languages spell) is signed at the bottom of each page by Marevak.

OAR #1 "Into the Borderlands" details two new areas, both accessible through the lower caverns.  These include a hidden tomb for Rogahn, and a secret sanctuary for Zelligar.  Marevak's notes could provide clues to the existence of these locations.
Delving Deeper: 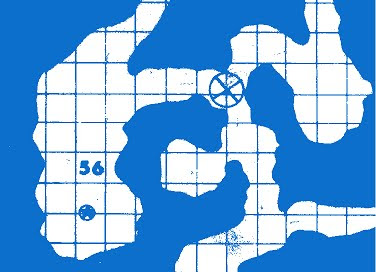 Just outside the Cavern of the Statue, in the corridor which leads eastward, is a large covered pit at the intersection of three corridors.

Many have contemplated a 3rd or even lower levels to the Caverns of Quasqueton.  Rather than a 10 foot deep pit trap, how about a shaft descending hundreds of feet into the Underdark, sealed by reinforced doors, and operated by a winch?
Access to a huge cavern, lit by phosphorescent lichen, and partially filled with a subterranean lake, would significantly expand the scope of the adventure.  There could even be prehistoric ruins with additional dungeon areas to explore.
Extraplanar Areas:
A final approach to expanding older megadungeons was through the use of extraplanar areas, such as those accessed through the "Glowing Grotto" in S4: The Lost Caverns of Tsojcanth, or the deeper levels of Greyhawk Castle: Expanded Version.
at March 14, 2021
Email ThisBlogThis!Share to TwitterShare to FacebookShare to Pinterest
Labels: Holmes, OD&D