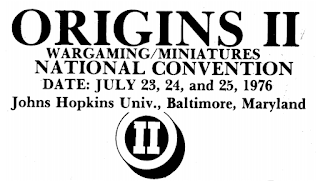 Advertisement for Origins II, from The Strategic Review #7 (April, 1976).

On the front page of the AD&D module, Gygax stated:

This module was the official "Advanced Dungeons & Dragons"* Tournament scenario at Origins II.  The author wishes to express his thanks to Mr. Robert Kuntz who contributed substantial ideas for the various encounters herein.

*Technically, Advanced D&D had likely not even yet been conceived in July, 1976, so the above needs to be appreciated in the context of the legal situation involving Dave Arneson in 1980.
In the preface for S3: Expedition to the Barrier Peaks, Gygax wrote:

This module was begun early in 1976 when TSR was contemplating publication of a science fantasy role playing game.  Jim Ward had already shown us some rough notes on METAMORPHOSIS ALPHA; I thought it would be a splendid idea to introduce Jim’s game at Origins II, and introduce the concept to D&D players by means of the tournament scenario.  I laid out the tournament from old “Greyhawk Castle” campaign material involving a spaceship, and Rob Kuntz helped me to populate the ruined vessel.  Both this scenario and METAMORPHOSIS ALPHA proved successful, but while the latter has been continually available since mid-1976, only a few copies of the tournament dungeon used for Origins II have been around.

Gary Gygax, S3: Expedition to the Barrier Peaks, 1980
The level of old "Greyhawk Castle" involving a spaceship might be in reference to Kuntz's "Machine Level", used as the D&D demo at Gen Con VII (1974).  James Ward described the technological level in his article "Boredom and the Average D&D Dungeon", from Dragon #17 (August 1978):

The Future or Machine Age: While some steady readers might think that I harp on this topic too much, the first time I came in contact with a level of this type was in the “mighty” castle of Greyhawk; run by Gary Gygax and Rob Kuntz.  Imagine conveyor belts that force players to travel in one direction or another, a cellophane machine that wraps you up no matter how big or small you are and puts you in a Vol. III No. 3 holding area for as long as it takes to rip yourself out, how about a die press that shapes anything in its path into a bottle top (Boy, can that hurt!), or a row of blades that cut in a pattern on the belt with a 25% chance that any given blade will cut you?  Try a slot machine that takes only large sums of gold and with the flip of the handle takes a random magic item from the party, and how about a lever that turns on something way off in another part of the level (like a robot or level clean up machine) that you can’t know about until you travel to that part of the level?  The treasures of this level could easily be more fun than the level: imagine bottle tops made out of mithril on wine bottles; how about guns and pistols that work; a set of chain mail made out of a super hard and light alloy that acts like plus 5 armor and shows no magical traits; how about a huge pile of gold dust in a large plastic bubble that isn’t small enough to get out the door and can’t be cut by anything less than a plus 5 sword?

James Ward, Dragon #17 (August, 1978)
Ward had already contributed an article "Magic and Science: Are They Compatible in D&D?" published in The Dragon #1 (June, 1976) in preparation for the D&D tournament at Origins II and the release of Metamorphosis Alpha (July, 1976).
It's been suggested that Gygax may have gotten the idea for "Expedition to the Barrier Peaks" from the novel "The High Crusade" (1960) by Poul Anderson, in which an alien spaceship lands in medieval England, (discussed on the Appendix N Book Club podcast in October, 2018.) 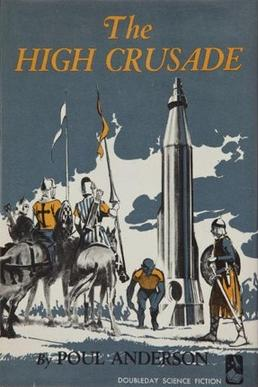 It should be noted that Dave Arneson likewise mixed fantasy and science fiction elements in his Blackmoor campaign, most notably in The Temple of the Frog and The City of the Gods, and that Arneson famously ran an adventure for Gygax and Kuntz in the City of the Gods in early 1976.
The City of the Gods is revealed to be a crashed spaceship in the BECMI module DA3: City of the Gods (1987), co-written by Arneson and David J. Ritchie, although I'm not certain whether Arneson's original City of the Gods was intended to represent a marooned spacecraft.
Expedition to the Barrier Peaks:
Copies of the tournament scenario from Origins II are exceedingly rare.  Kuntz blogged about a copy sold on ebay in 2010.  Allan Grohe very kindly posted some photographs of a personal copy on his blog in October, 2018, from which it's possible to read the tournament background:

The Duchy of Geoff has recently been plagued by a rash of weird and terrible monsters of unusual sort.  The area to the west, particularly the foothills of the Barrier Peaks which separates the Duchy from the Sea of Dust, has long been renowned for the generation of the most fearsome beasts, and it has been shunned accordingly by all save a handful of hardy souls with exceptional abilities and sufficient wealth to build stout strongholds to ward off the attacks precipitated by these beasts.  Within the last few months, however, a walled town not far distant from the area, as well as four castles, were destroyed by mysterious attacks.  The local barons and lords who remain have sent in several decomposed bodies of some of the creatures assumed to have been part of these attacks, but the bodies were in such state that nothing could be learned.  The urgent plea for aid which accompanied these remains could not be ignored.  The Duke acted immediately, selecting several of his doughtiest warriors and called upon other powers in the realm to send their minions also.  Thus, the Society of the Mages, the Fellowship of the Blinding Light, the Thieves' Guild, and the Lord of Elves in the region have also selected brave adventurers and equipped them accordingly to accompany the expedition. A total of 15 characters assembled.

Expedition to the Barrier Peaks, 1976
This background information is interesting in that, as with The Tomb of Horrors from Origins I, it refers to locations within the original OD&D setting, based on the map of the Great Kingdom: 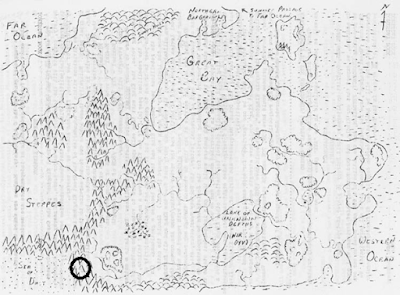 Map of the Great Kingdom from Domesday Book #9 (1971) with location of the Barrier Peaks, separating "the Duchy (of Geoff) from the Sea of Dust."

There were several changes made to the background information, when the adventure was revised for publication as module S3:

It is said the regularity of sunrise and sunset, the cycles of the moon, are as fixed as the resolve of Pholtus to show all creatures the One True Way, a strict path which allows no deviation but gives absolute assurance of rightness.  Some followers of the Blinding Light actually claim it is their deity, Pholtus, who ordered the rigid progression of the sun and moon and maintains them in his regimen.  Such claims are not regarded as doctrine.

As a Mystara fan, I see parallels between Pholtus and the Mystaran immortal Ixion.
Suggested levels:
The AD&D module is billed as "An adventure for character levels 8-12" although within suggests a party size of "10-15 characters with most having levels between 5th and 10th".
I wonder if this is a holdover from the tournament version, since the list of 15 pregenerated characters possess levels ranging from 4-12, with an average level of 7.6, and are limited to races and classes from OD&D + Greyhawk.
The suggested levels for the AD&D version appears to limit the adventure to high-level characters, but judging from the pregens, lower level characters (levels 4-10) may be used.
Using "Expedition to the Barrier Peaks" in your OD&D campaign:
The hook for this adventure is an easy sell for lawful-type, heroic parties.  While deadly, it's not as unforgiving as the Tomb of Horrors.
The science fiction element can serve to spice up a campaign in which the PCs are eager to try something new, taking the party into unfamiliar territory.
Gygax even transported a group onto the Starship Warden, as described in his article "Faceless Men & Clockwork Monsters", published in The Dragon #17 (August, 1978).
at June 13, 2020
Email ThisBlogThis!Share to TwitterShare to FacebookShare to Pinterest
Labels: Greyhawk, The OD&D Game World