The first Greyhawk Castle was designed by Gary Gygax in late 1972 and 1973, while playtesting the original D&D rules.  El Raja Key was created by Robert Kuntz, soon afterwards.  Gygax and Kuntz subsequently collaborated to revise and expand the original Greyhawk Castle, in 1974.

The adventures taking place in the dungeons beneath the first castle, refereed by Gygax, as well as in the megadungeon beneath the expanded castle, co-refereed by Gygax and Kuntz, attained legendary status.  To date, neither version of the castle has ever been published.

The manuscript for Gary's, unpublished, original home campaign is still extant!  Indeed, I have unearthed the original castle manuscript of 22 levels.  Also, the larger, expanded castle of 62 levels is also intact and well secured by Gary's widow, Gail Gygax.  Additionally, there are over a dozen alternate levels that were used to change out levels depending on who was playing.  In total nearly 100 levels of the castle exist with some 300 pages of keys.

The original castle was 13 levels deep, with side-levels branching from these.  Gygax and Kuntz incorporated several of the levels from Kuntz's El Raja Key in constructing the expanded castle, comprised of a central core with four main branches. 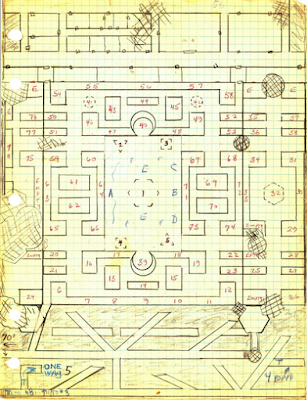 Museum of the Gods, from Greyhawk Castle (downloaded from Gygax Games website). See this thread at Knights & Knaves Alehouse for discussion.

Of the 62 levels in the expanded castle, 41 were designed by Gygax and 21 were designed by Kuntz (6 were a joint effort).  Kuntz has requested that his original levels and their keys be returned to him (you can read about it on his Facebook page, here).

For those of you wondering what Kuntz's levels for the expanded version of Greyhawk Castle look like, you can access the maps through the El Raja Key Archive, released in 2016.  For a sense of what this means for the typical OSR gamer, check out this video by the Jaded Fanboy.

While I'm hopeful that we'll eventually see the manuscripts for both versions of Greyhawk Castle published, it's at least possible to summarize the various details on the layout of the expanded castle into a core dungeon with extensions to the north, south, east, and west.

Using a couple of sheets of 17" x 22" graph paper, I drafted a complete, mostly undamaged castle above ground.  It had multiple levels, and a lot of encounters, the higher up, the more dangerous.  Then, using the same sort of paper I drew a new first level that could accommodate both bands of fledgling adventurers and the initiated.  Four separate descent areas were created with designation by the cardinal directions.  Each had multiple flights of stairways leading lower, some ending several levels farther down.  Three were "guarded" by dungeon denizens - elves, dwarves, a very large and strong ogre.  One descent area only, that most difficult to find, was deserted and free of "charge" by some guardian.  The vast majority of the space, however, was filled with passages, chambers and rooms...

As was indicated in the Gord short story, "Heart of Darkness", Castle Greyhawk indeed had a fifth descent area.  In the very center of the first level, where most explorers entered via the circular stone steps there, was a hard-to-discover secret entrance to the continuation of that spiral stairway.  It went down all the way to the ninth level, with some side exits along the route accessing some intermediate levels not generally accessible save from this shaft...

The side entrances to the second and lower dungeon levels were basically insular.  That is, each led to a series of seven lower levels that were distinct, so that there was North #2 through #8, East #2 through #8, South #2 through #8, and West #2 through #8...  These sets of levels had few inter-connections, save at the very bottom, where each eighth level had a connection down to the ninth, central, level. 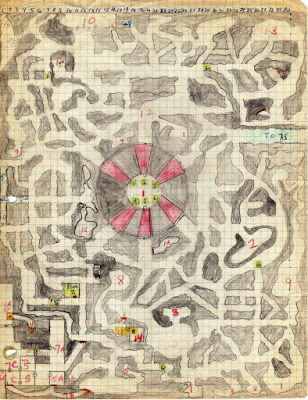 [The Tsojconth Level] was originally part of Castle El Raja Key and corresponds with Castle El Raja Key Level 10.  This is Rob's original map but his key still resides with Gary Gygax's copy of the Expanded Greyhawk Castle.  Gary liked the design so much that he borrowed the idea and it became the Greater Caverns for the WinterCon V tournament module, the Lost Caverns of Tsojconth in 1976.  Rob's original map, shown here, was edited by Rob and Gary for use in the Expanded Greyhawk Castle as Core Level 7...

This level was featured in Gygax's short story "The Expedition Into the Black Reservoir" published in El Conquistador, vol. 1, no. 12, August 1974)

North Level 8 - The Lake (map and key by Gygax, based on Kuntz's original design)

Possible location of Kuntz's Garden of the Plantmaster

South Level 9 - "Horsing Around" (or "Greek Mythos", a split level)

From nine on, the levels of Castle Greyhawk progressed straight down for another dozen or so tiers...  Not surprisingly, a number of these levels also had magical transportation places that sent PCs off to distant lands, other dimensions, strange worlds, or different times.

Other levels include the Skull Island/King Kong extraplanar level → WG6 Isle of the Ape (TSR,1986), and "The Teeth of Barkash Nour" (discussed here):

In the bottom-most level of the Castle Greyhawk dungeons lies a massive gate of horn, beyond which is a small dimension.  Within lie weird environments including a savannah of mobile plants that attack interlopers, a great "Egyptian" tomb, a desert of golden dust where north equals south and south north, a frozen wasteland and a huge lake where a large Slimey Horror possessing huge claws and the ability to reduce the unlucky to yellowish clay if the thing's mucous is breathed on them when they are in the water.  It is also the demesne of a mighty storm giant.  Fabulous treasures can be won in each of these lands, but the mightiest of them are the fabled Teeth of the Barkash Nour.  Those passing through the Gate of Horn at the very roots of the dungeon of Castle Greyhawk have but twenty four passing hours to locate the teeth and retrieve them all, else be expelled from the weird plane, never permitted to enter again...

The Dungeon Delver, from a comment on Zenopus Archives, March 2015

For more on the expanded castle, readers are advised to check out grodog's "The Many Levels of Castle Greyhawk", here.
at June 06, 2020
Email ThisBlogThis!Share to TwitterShare to FacebookShare to Pinterest
Labels: Greyhawk, The OD&D Game World