OD&D Supplement IV: Gods, Demi-Gods & Heroes was billed as "the last D&D supplement" in The Dragon #2.  It was co-authored by Robert Kuntz and James Ward, as discussed in this interview with Ward on the "Save or Die!" podcast.  The foreward is by Tim Kask. 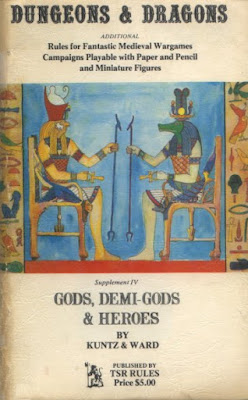 The various gods and demi-gods are ascribed psionic abilities of increasing strength (class 1-5) or are listed as immune to psionics (class 6), and their ability scores, unless otherwise stated, are considered to be 20 across the board.
In his article "D&D is only as good as the DM" published in The Strategic Review #7, Gary Gygax implies an upper limit of 14th level for player characters.  The magic and fighting abilities of the various deities appear to reflect this.
Egyptian Mythology:

The ancient Egyptians had a culture lasting over 3,000 years.  It is only natural that their faith would undergo a change.  Their Gods aged with Ra starting as the ruler and growing senile and Osiris taking over after being killed by Set.  The pantheon presented is one with Ra in prominence only because there are more Gods in this early group.

Ward expresses his admiration for Egyptian mythology in the above-mentioned interview on the "Save or Die!" podcast.
"Minions of Set" (10th level fighters able to transform into giant snakes) are described.  New monsters include the sphynx, fire snakes, winged serpents, and phoenix.  A magical weapon, the "life scepter" usable by the Gods (mainly Thoth), is also described.
Alan Lucien's Tomb of Ra-Hotep, the inspiration for Gary Gygax's "Tomb of Horrors" is situated in an Egyptian-type setting.
Gods of India:
Several Hindu deities are described, possibly inspired by Roger Zelazny's Hugo award-winning science fantasy novel Lord of Light (1968).
Modified statistics are given for rakshasas (originally appearing in The Strategic Review #5) and nagas (originally appearing in The Strategic Review #3).
New monsters include maruts (wind spirits), yakshas ("weaker demons of India"), ribhus (as per D&D elves), and ogres (as per D&D, but can polymorph themselves).
Steve Marsh's OD&D mystic is well suited to an Indian-type setting.
Greek Mythology: 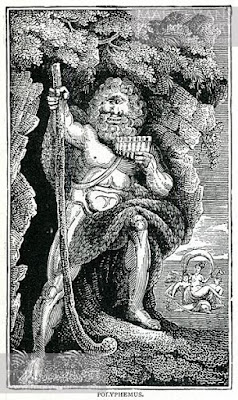 Polyphemus the Cyclops at the opening of his cave, staff in one hand and pipes in the other.  Three sea nymphs and a dolphin are in the background.  Anonymous woodcut in The Strand Magazine, July- Dec 1892, page 204 and also in "1000 Quaint Cuts", page 47.  Mary Evans Picture Library

Several D&D monsters were drawn from Greek mythology, including chimeras (the illustration in Blackmoor was likely based on an Etruscan sculpture), hydras, medusas, minotaurs, and titans.

Statistics are given for Cerberus and the Hundred-Handed One.  New monsters include cyclopes (one-eyed giants), and satyrs.
The Celtic Mythos:

The Celtic mythology is by no means confined to the English Isles.  The Gods are all in human form as opposed to some of the other pantheons mentioned.  They all have spheres of influence given for each God.  These spheres are areas of control for the Gods and any manipulation of them by humans or other life forms causes the Gods to take an interest.

Several gods from Celtic mythology are described.  New magic items include the "torc of the gods" (allowing the holder to shapechange at will) and a weapon of war, the "tathlum".
In his article on bards in The Strategic Review #6, Doug Schwegman states:

The Celts, especially in Britain, had a much more organized structure in which the post of Bards as official historians fell somewhere between the Gwelfili or public recorders and the Druids who were the judges as well as spiritual leaders.  In the Celtic system Bards were trained by the Druids for a period of almost twenty years before they assumed their duties, among which was to follow the heroes into battle to provide an accurate account of their deeds, as well as to act as trusted intermediaries to settle hostilities among opposing tribes.

Schwegman also states "Bards and Druids are closely connected and since they both belong to the same sect each must aid the other if they are in need."
Bob Blake's Gen Con IX dungeons take place in a world "roughly similar to Celtic mythos", a setting revisited in Blake's later "Prophecy of Brie" cycle.
The Norse Gods: 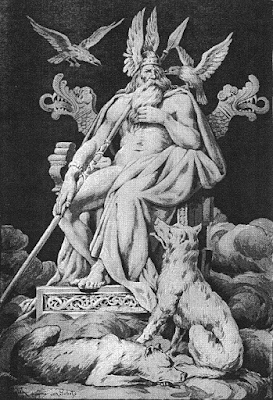 Illustration of Odin from "Old Norse Stories" page 119, by Sarah Powers Bradish (1900).  The entire text, complete with illustrations, is downloadable at archive.org

Gods, Demi-Gods & Heroes includes an extensive section on Norse mythology  Ward mentions The Mighty Thor as an influence, in his interview on "Save or Die!"
Statistics are given for Garm, the Fenris Wolf, and the Midgard Serpent.  New monsters include nissies (brownies), neck, and fossergrims.
Paul Karlsson Johnstone discusses berserkers in his excellent article "Origins of the Norse Pantheon" in The Dragon #29 (September, 1979)
The Finnish Gods and Heroes:

The action here takes place in Lapland and its environs, including Pohjola "a dark, dismal country north of Lapland."  Unlike other mythologies, the heroes are the powerful ones here.  If you have read the Malevella you will know what I mean.

The section on Finnish mythology describes the Finnish heroes, their powers and weapons, as well as the Finnish gods, monsters, magical items, and new spells.
Gygax's famous character, Mordenkinen, was inspired by Finnish myth:

The background I created for Mordenkainen was Finnish-like in nature, and his master was a chap called Old Waino...I picked the name because one Vainomoinen was sometimes referred to as "Old Waino."  I really was captivated with Finnish myth after seeing a B&W movie done by the Russians, I think, about him, Leminkainen, and Ilmarinen adventuring to Pojola and entering Louhi's fortress, then reading "The Green Magician" by de Camp and Pratt as well as the Kalevala.

Gary Gygax, En World, June 13, 2006
The film Gygax refers to was probably "Sampo", edited and released in the U.S. as "The Day the Earth Froze".  The Finnish version was apparently restored and released on DVD in 2014.
"The Green Magician" by L. Sprague de Camp and Fletcher Pratt, one of their Harold Shea stories, was reprinted in The Dragon #15 and #16 (1978).
Robert E. Howard's Hyborea:

Conan's world is very real in that Robert E. Howard went to great lengths to limit his magic and sorcery to firm up the believability of his stories.  The Gods of his world are of many types and go from one extreme to the next in working, or leaving  alone, mankind.

Stats for Conan are included (F15/T9; Str 18/100%, Int 16, Wis 10, Con 17, Dex 18, Cha 15).  Gygax later provided AD&D stats, in The Dragon #36.
Set is the same as in the Egyptian section.  Various characters, monsters, and magical items from the Conan stories are described.
The Kraken makes reference to the novel "Dwellers in the Mirage" by A. Merritt (1932).
Elric and the Melnibone Story Line:
Stats for Elric and Stormbringer are included, in addition to other characters, monsters, and magical items from the Melnibone stories.
Neither the Hyborean nor Melnibonean sections were included in Wizards of the Coast's reprint of Gods, Demi-Gods & Heroes (2013).
Mexican and Central American Indian Mythology:

Due to the lack of space in this booklet we, the authors, are only able to present parts of this mythology.  What is listed below will be mainly the gods & let it be noted that information on these divinities is scarce.

A short section touching on Aztec mythology.  Quetzacoatl (Kulkulkan "in Incan") is described as the feathered Serpent-God of Mayan religion. 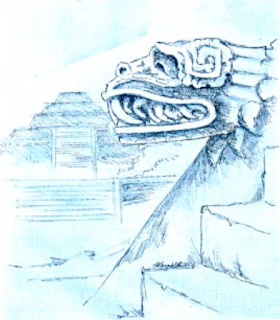 Stone carving of The Feathered Serpent, Temple of Quetzalcoatl, Teotihuacan.  Illustration by Lynn Harpold, from The Dragon #2 (August, 1976).

The mythology of the Far East is varied and colorful.  In dealing with it, the concepts of Yin and Yang must be defined.  These are the Chinese equivalents of bad and good.  These opposites are almost beings in themselves and move all Gods and creatures in a war for supremacy.  In using eastern Gods one should always think of them as not lawful or chaotic, but having good Yang or bad Yin.

The final section covers Chinese mythology.  Descriptions are provided for various gods and demi-gods, in addition to spirits and demons (stats for rakshasas are used for the latter).
Several magic devices are described, including a Giant Black Pearl (negates all wind and earth turbulence in a 1 mile radius), which brings to mind the great black pearl "of the gods" mentioned in module X1 "The Isle of Dread".
See also "Chinese Dragons" (The Dragon #24) and "Chinese Undead" (The Dragon #26) by David Sweet.
at June 20, 2020
Email ThisBlogThis!Share to TwitterShare to FacebookShare to Pinterest
Labels: OD&D, The OD&D Game World