"The Strategic Review" served as "the newsletter of Tactical Studies Rules" and covered topics in military miniatures, games, and swords & sorcery.  Vol. 1, No. 5 (December, 1975) was released in November, 1975 (16 pages).

The editor is listed as Timothy J. Kask, the AFV editor as Mike Reese, and the contributing S&S editor as Steve Marsh. 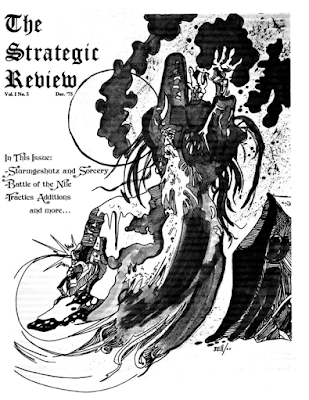 A column by Tim Kask, formerly "TSR News".  Among the various updates:


Also a little in the future is an EPT-based game on the order of DUNGEON!.  However, the similarity is merely superficial.  It is a really promising game in its own right, played on a beautiful board.

This board game, named "Quest!", was developed, but never published.  I got a chance to play it at Gary Con XI in 2019.  The session was hosted by the game's designer, Bill Hoyt. 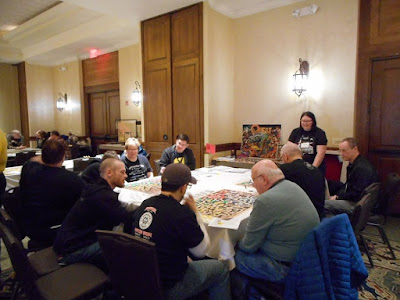 Quest!  The Underworld of Tekumel, at Gary Con XI in Lake Geneva, March 2019.  Photograph from the Legends of Wargaming Facebook page.


I found the game really enjoyable, in the spirit of David Megarry's "Dungeon!", but with creatures from the underworld of Tekumel. 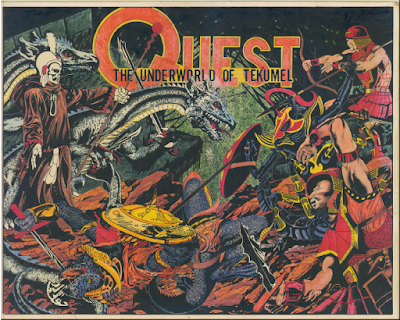 Cover art for the Quest board game, courtesy of Paul Stormberg, with thanks to Bill Hoyt.

The orders of battle, situation analysis, and objectives for a confrontation between a German SS Patrol and The Servants of The Gatherer, along with a detailed summary and game analysis, from a mixed Tractics/D&D session, originally mentioned in The Strategic Review #3. 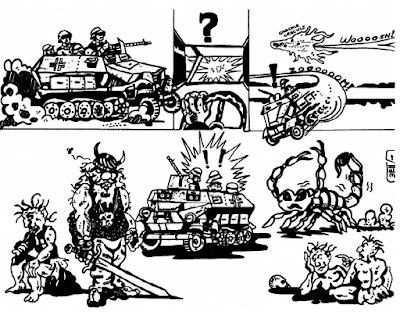 Sturmgeshutz and Sorcery, from The Strategic Review #5.  Illustration by Greg Bell.


The Gatherer, an Evil High Priest (12th level, with +2 armor & shield, snake staff), could easily be repurposed to serve as an OD&D castle wilderness encounter.  His lieutenants are Grustiven the Warlock (8th level magic-user) and the Lama Goocz (7th level cleric).

The Servants of The Gatherer include:

The EHP also commands a force of 200 orcs, led by his "strongest fighters", who are elsewhere at the time of this encounter, warring against a Neutral Lord who insulted him.

More information about a proposed fan-based supplement, originally mentioned in The Strategic Review #4:


We have been kicking around the idea of a readers/players supplement, composed of material submitted to us.  We get stacks of stuff every week from players, and a good deal of it is quite good.  Well, it is impossible to print every bit of it in SR.  We just don't have the space.  And we certainly don't want to discourage future submissions.  So we thought we would select the best material received and print it along with the items printed in SR in a supplement.  Everyone that has a piece printed will have it credited to them, and receive two copies of the supplement as payment.  (The reason for including stuff from SR is that it wouldn't be fair to the already printed authors, because their stuff is definitely good material, and no one gets paid anything more than an extra copy for items used in SR, excepting the pride of seeing their name in print.)  How about a supplement of nothing but magic?  (Spells-only, or items only, or somewhere between?)  Or how about a book of Artifacts and Relics?

Supplement III: Eldritch Wizardry, included a new character class (the druid) contributed by Dennis Sustare, but no material previously appearing in The Strategic Review.  There was, however, a section on Artifacts and Relics.


Another idea in the pot is geomorphic dungeon maps.  Let us know what you think of these, and feel free to make additional suggestions.  We want to publish what you want most.

Dungeon Geomorphs Set One: Basic Dungeons, designed by Gary Gygax, was released the following year.  It was followed by Set Two: Caves & Caverns, and Set Three: Lower Dungeons, both published in 1977.  All were in the style of his maps for Greyhawk Castle.


I looked then and saw that his robes, which had seemed white, were not so, but were woven of all colours, and if he moved they shimmered and changed hue so that the eye was bewildered.

J.R.R. Tolkien, The Fellowship of the Ring

This magic item, with its ability to bedazzle and hypnotize, was presumably inspired by the robes of Saruman of Many Colours.

Several types are described, including Beads of Atonement, Beads of Response, Beads of Damnation, Beads of Karma, Beads of Succor, and Beads of Hindrance.


We've heard about a D&D Con on the West coast, but we're a little upset at the advertising he sponsors used.  They claimed that Fritz Leiber was going to be there with "his" dungeon, but when we asked him, he said it was untrue.  Hope none of our loyal D&D fans are duped, so verify before you go, and spare yourself some disappointment.

A brief history of DunDraCon* by Steven Perrin, sets the story straight, here.
*DunDraCon I (Mar, 1976) is where the Bay Area "Perrin Conventions" were introduced.

Based on the rakshasa of Hindu mythology.  Gygax was inspired to create statistics for this creature after watching Horror in the Heights, an episode of "Kolchak: The Night Stalker" (1974-75), according to this En World Thread in July, 2005. 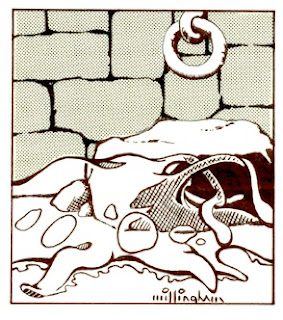 
A nasty creature, able to kill adventurers in their sleep, unless a save vs. paralysis is made.  With only a 5% chance of spotting its transparent body, this can even happen with somebody on watch.  The illustration above was originally posted on Zenopus Archives in March, 2012

Gygax confirmed that both the Trapper and the Lurker Above were inspired by the Ngóro (“the Whelk”) and the Biridlú (“the Mantle”) respectively, creatures from M.A.R. Barker's "Empire of the Petal Throne", in this En World Thread in October, 2007.
at April 11, 2020