"The Strategic Review" served as "the newsletter of Tactical Studies Rules" and covered topics in military miniatures, games, and swords & sorcery.  Vol. 1, No. 4 (Winter, 1975) was released in October, 1975 (12 pages).

The editor is listed as E. Gary Gygax, the associate editor as Brian Blume, and the AFV editor as Mike Reese.

Mention is made of new TSR staff members Tim Kask (joining as periodicals editor, starting with the next issue of The Strategic Review), Terry Kuntz (joining as service manager, at work on a "Robin Hood" game, and responsible for rules queries), and Dave Arneson.


We are also seriously considering the production of a D&D supplement authored by "DUNGEONS & DRAGONS ENTHUSIASTS EVERYWHERE", edited by Gygax, Arneson, and possible Kuntz also, for that will be a big job.  Each contribution would be credited to the appropriate author, and contributors would receive several free copies of the booklet.

It's interesting to speculate what such a supplement might have contained.  New character classes (such as the ranger, the illusionist, and the bard) were originally contributed by fans.  Future material would appear as "D&D variants" in The Dragon.

Finally, there is an announcement regarding DunDraCon I (Feb 27-29, 1976) and a listing of several D&D oriented fanzines, including Alarums & Excursions and Great Plains Game Players Newsletter, as well as a Dungeonmaster Listing with early notable game designers.

A brief article by Gygax, titled "A few more words on medieval pole arms" is included, adding to the previous article on pole arms, published in The Strategic Review #2.  Examples of military forks and holy water sprinklers are given.

*see also "The Nomenclature of Pole Arms" by Gygax in The Dragon #22 (Feb, 1979).
There is also a brief section on Chainmail Weapons Additions, based on material submitted by Steve Marsh concerning Japanese Jo sticks and Bo sticks.  Gygax provides Chainmail statistics for these in comparison to the quarterstaff.

The illusionist was introduced as a character class in SR#4, in an article contributed by Peter Aronson.  For a fascinating look at the evolution of this sub-class, see "The Complete OD&D Illusionist" on Jon Peterson's blog "Playing at the World" in March, 2019. 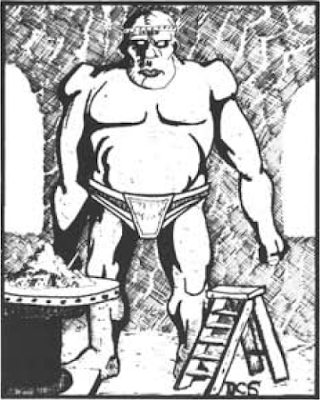 
Whereas golems (flesh, stone, iron) in the Greyhawk supplement are created by ultra-powerful (or ultra-knowledgeable) magic-users, clay golems are instead created by lawful clerics (15th level or above), and possess the abilities of a 12 HD earth elemental.

Kask discussed the horror film "It!" (1967) as the source of inspiration for the clay golem, in a post on Dragonsfoot in May, 2010.  The creature in the movie was revealed to be the legendary Golem of Prague, from Jewish folklore.

A similar creature named The Golem, which drew supernatural power from the earth, was published by Marvel Comics, in "The Golem: The Thing That Walks Like a Man", a story arc starting in Strange Tales #174 (June, 1974).

Based on the enigmatic, swirling IOUN stones from the short story "Morreion" by Jack Vance, published in Flashing Swords #1 (Dell, 1973).  Permission was granted by Vance to include the stones as magic items in the D&D game.
at April 04, 2020

Email ThisBlogThis!Share to TwitterShare to FacebookShare to Pinterest
Labels: Tekumel, The Strategic Review