"The Strategic Review" served as "the newsletter of Tactical Studies Rules" and covered topics in military miniatures, games, and swords & sorcery.  Vol. 1, No. 2 (Summer, 1975) was released in April, 1975 (8 pages).

The editor is listed as E. Gary Gygax, the associate editor (promoted from assistant editor, the previous issue) as Brian Blume.

SR #2 was dedicated to the memory of Don Kaye, the co-founder of TSR, with Gary Gygax.  Kaye was only 36 years old when he suffered a heart attack on January 31, 1975.  His untimely death led to the Blume family gaining a two-thirds controlling interest in the company.

These were the first published clarifications of the D&D rules, dealing with multiple attacks, initiative, unarmed combat, experience points, and spell-casting.


"When fantastic combat is taking place there is normally only one exchange of attacks per round, and unless the rules state otherwise, a six-sided die is used to determine how many hit points damage is sustained when an attack succeeds."

"A super hero, for example, would attack eight times only if he were fighting normal men (or creatures basically that strength, i.e., kobolds, goblins, gnomes, dwarves, and so on)."

"Initiative is always checked.  Surprise naturally allows first attack in many cases.  Initiative thereafter is simply a matter of rolling two dice (assuming that is the number of combatants) with the higher score gaining first attack that round.  Dice scores are adjusted for dexterity* and so on."


Rules for grappling are explained.  Successful "hits" necessitate a check to determine whether the defender has been pinned.  The hero rolls 4d6 (1 die/level) and compares his total to the 2 orcs who successfully grappled him (2d6, 1 die/orc).  The hero wins and the difference represents the number of combat rounds his opponents are "stunned" (divided among the attackers).

The Hero (4th level fighting man) is permitted 4 attacks per round "one attack for each of his combat levels as the ratio of one Orc* vs. the Hero is 1:4, so this is treated as normal (non-fantastic) melee, as is any combat where the score of one side is a base 1 hit die or less."

*the orcs get a bonus of +2 to hit, when attacking from behind


Values for some magic items are given, a 1gp to 1xp ratio is mentioned, and a ratio for monsters based on their hit dice is described.


Explicit reference to Vancian spell mechanics "the magic-user gains spells by preparations such as memorizing incantations, and once the spell is spoken that particular memory pattern is gone completely."

"In a similar manner spells are inscribed on a scroll, and as the words are uttered they vanish from the scroll." 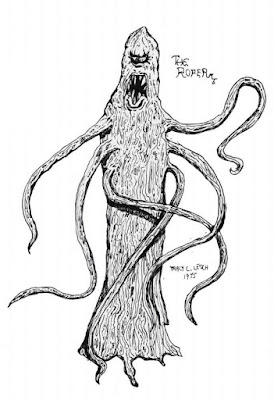 The Roper, as portrayed in the Blackmoor supplement (1975).  Illustration by Tracy Lesch.


The roper is described as a yellowish-gray "mass of foul, festering corruption".  Although depicted upright in the above illustration, ropers can stretch out upon the floor "so as to look like nothing more than a hump."

Ropers possess a half-dozen strands of sticky, rope-like excretions, able to strike from 20-50 feet away, causing weakness (50% decrease in strength) in 1-3 rounds (save vs. poison) and slowly dragging victims to their maw, at a rate of 10 feet/round.

Like mind flayers, ropers possess "magical resistance" (at 80%).  The only prior creatures with magical resistance were balrogs, (as discussed here), removed from later printings of the OD&D rules.

The ranger was introduced as a character class in SR #2, modeled after the character of Strider/Aragorn in The Lord of the Rings, in an article contributed by Joe Fischer (see also Grognardia in 2009, and Blog of Holding in 2013). 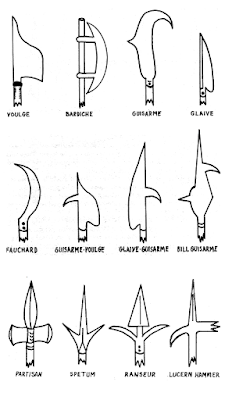 Pole arms from The Strategic Review, Vol. 1, No. 2


Various pole arms were described in the AD&D 1e Players Handbook, as well as Unearthed Arcana.  They were discussed in terms of the "weapon mastery" rules in the D&D Master's Set, edited by Frank Mentzer. 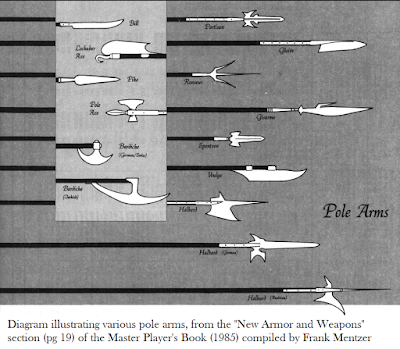 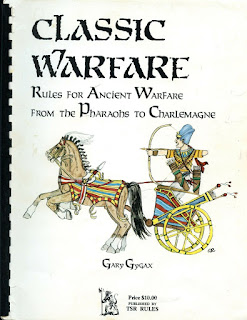 
The rules were ultimately published as a 68-page booklet, covering battles from Dynastic Egypt to the time of Charlemagne, preceding the medieval period covered in the Chainmail rules.  It would be interesting to see what ideas could be mined for a pre-medieval D&D campaign.

"WAR OF WIZARDS portrays the final showdown between two powerful magic-users; two men face each other across a space some thirty paces long and ten wide, attacking and defending with their awesome abilities until one lies in the dust, defeated." 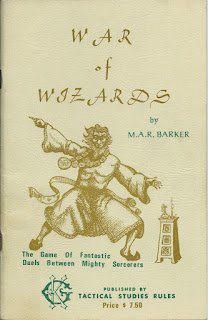 A game designed by M.A.R. Barker, the creator of Tekumel.  For more information, see this review on the Tekumel Collecting website.
Update (July 1, 2020): Bill Hoyt describes Katherine Kurtz's novel "Deryni Rising" (1970) as the source of inspiration for "War of Wizards" in a recent interview on "The Hall of Blue Illumination" a podcast dedicated to M.A.R. Barker's world of Tekumel.
at February 01, 2020