Origins I: The Tomb of Horrors

Gary Gygax prepared "The Tomb of Horrors" as the D&D tournament dungeon for Origins I, held July 25-27, 1975 at Johns Hopkins University, Baltimore MD.  Revised for AD&D, the original version was only made widely available as part of the special edition of "Art and Arcana" in 2018. 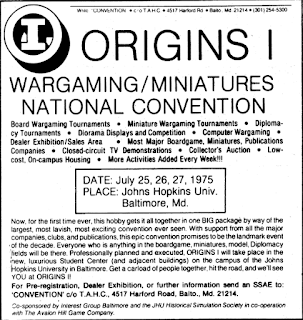 Advertisement for Origins I, from The Strategic Review #2 (Summer, 1975)


James Ward recently posted some comments about "The Tomb of Horrors" as well as Gary's rationale behind creating the dungeon, on Facebook.

A first-hand account by one of the tournament players, Mark Swanson, was published in Alarums & Excursions #4 (Sept, 1975).  Another, by Greg Costikyan, was published in the fanzine "GIGO" (Garbage In, Garbage Out) #4 (see pg. 27).

Gygax commented on the tomb, in a letter published in Alarums & Excursions #15 (in apparent response to a comment by Rosenberg, the previous issue):


A good example is the Origins I dungeon -- incidentally drawn from a similar tomb designed by Alan Lucien.  Very few of the players who engaged in the tournament were able to think out the problems.  In a test run, Rob Kuntz, in his game persona as a 13th level (evil) lord went through the entire tomb in four hours actual time.  He took 14 orcs and a couple of low-level flunkies with him.  He lost all the party, but his character personally looted the lich's tomb and escaped with the goodies.  Rosenberg is wrong, for there were a number of ways to get out the place, although only two to get out with anything except your skin.


The Tomb of Horrors:

The 1975 version begins with a "Legend" heading, underneath which are listed the following words and phrases:

The AD&D version (1978) explains that these scraps of information are all that is obtainable by consulting sages or through the use of legend lore spells. 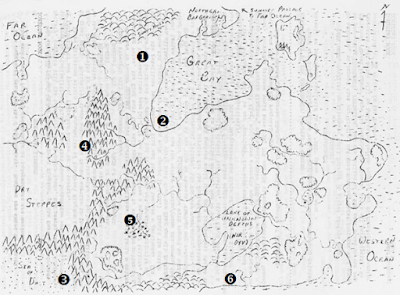 
The original version provides a number of possible locations for the tomb, which suggest the emerging concept of an OD&D "game world":


Possible locations:
1) The highest hill in the Egg of Coot.
2) An island lying 100 miles east of Blackmoor.
3) In the great desert west of the Wild Coast.
4) On the border between the Paynim Kingdom and Perrunland.
5) At the eastern edge of the Duchy of Geoff.
6) In a swamp somewhere in the Wild Coast.*

*In the AD&D version, Gygax states "When this module was used at Origins I, referees were instructed that the hill had been found in the Vast Swamp, and the party had arrived there in barges."

Many of these locations are present on David Megarry's copy of an old map of the Great Kingdom, as discussed at Zenopus Archives in 2018 (the region labeled "Contested Area" likely representing the Wild Coast, as developed by Robert Kuntz).

The AD&D version also contained possible locations for the tomb, revised for the World of Greyhawk, two years before the setting was published. 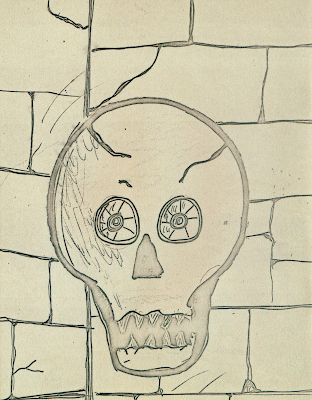 The Lich's Skull.  Illustration by Tracy Lesch.  From the 1975 tournament version of "The Tomb of Horrors"


There are hints of new character classes in development, in the list of ways to destroy the Lich's skull.  "The highest Divine destroys it by touch." and "A Mystic can destroy by mind battle (Mental power rating of the skull is 18)."

The Divine was a character class envisioned by Gary Gygax, likely inspired by the protagonist in Sterling Lanier's 1973 novel "Hiero's Journey".

The Mystic was a character class proposed by Steve Marsh, a "sort of a cleric" modeled after the abilities of Indian mystics.

Both of these new classes were subsumed into the psionics system in the D&D supplement "Eldritch Wizardry" (1976), edited by Tim Kask.

The list of 15 pregenerated characters possess levels ranging from 4-12, with an average level of 7, including a half-elf cleric (as per the Greyhawk supplement).

The AD&D version is billed as "An adventure for character levels 10-14" but likewise has a list of (20) pregenerated characters, ranging in levels from 6-14 (accounting for multiclassed characters), with an average level of 9.25

I'm certain that the suggested levels for the AD&D version contribute to the reputation of the Tomb as a career-ending prospect for high level characters, but judging from the pregens for both versions, lower level characters may be used.


Using "The Tomb of Horrors" in your OD&D campaign:

In considering PC motivation for tackling "The Tomb of Horrors", this is an adventure for avaricious tomb-raiders, in true "Swords & Sorcery" fashion.  It's not a quest for Tolkienesque heroic fantasy campaigns.

That having been said, a game world in which the Tomb is known to exist, even with no reason for the party to attempt to plunder it, is a world with a greater sense of mystery and menace.

The original version of this adventure could be used as a character funnel, in order to kick start an OD&D campaign.  Each player can be given 3-5 pregens, with survivors (if any) going on to tackle "Expedition to the Barrier Peaks", "The Lost Caverns of Tsojconth", or even the G series.

For my part, I've never run either version, although I'm looking forward to the opportunity to do so, either as a one-shot, or at a con in a 2-4 hour time slot.
at February 15, 2020
Email ThisBlogThis!Share to TwitterShare to FacebookShare to Pinterest
Labels: Greyhawk, The OD&D Game World