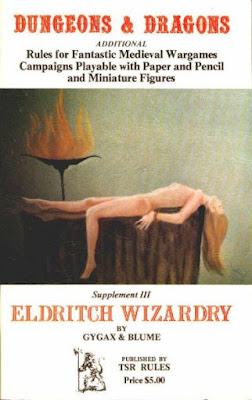 
Tim Kask played a major role in shaping Eldritch Wizardry, although Brian Blume's contributions were minimal.  Blume shared credit as co-author with Gary Gygax, largely owing to his position in the company, a troubling sign of things to come.

*Deborah Larson was a young, Minneapolis-based artist, according to Art & Arcana: A Visual History (2018).  Her pulp-inspired cover illustration was probably modeled after the dust jacket from the first edition of Dwellers in the Mirage (1932) by Abraham Merritt.

The title page includes a special thanks to "Elder" Steve Marsh, Dennis Sustare (the "Great Druid"), Jim Ward, and Tim Kask for suggestions and contributions.  The booklet is divided into 3 sections, one for each of the 3 volumes in the original D&D rules, beginning with Men & Magic:

Eldritch Wizardry is mostly remembered for the introduction of psionics into the D&D game.  Kask's role in devising the system, based on Steve Marsh's "Mystic" and Gary Gygax's "Divine" character classes, was discussed in this post by DM David in August, 2017.

The psionics rules were intended to "enliven games grown stagnant" where the possibilities of the original rules were exhausted.  For a comprehensive explanation of OD&D psionics, as presented in Eldritch Wizardry, see this post on The Wasted Lands blog from January, 2019 .

Psionic combat on the astral plane, illustration by Dave Trampier, from the AD&D 1e Players Handbook


I've experimented with psionics in the past, giving players a chance to see if their characters have psychic potential.  My son, in particular, was really excited to try, after learning about psionics.  Fortunately or unfortunately, he never made the rolls.

In an attempt to balance the attainment of psionic abilities and psionic attack/defense modes, psionic characters lose abilities related to their primary class as they advance, which was necessary to prohibit high level characters from becoming too powerful.

The druid was introduced as a neutral sub-class of the cleric:


When the thief class was released in the Greyhawk supplement, as an addition to the original fighter, cleric and magic-user, we became interested in other possible classes beyond these four. I wrote up and mimeographed a set of rules for a new druid class, for our internal play. After some playtesting in our game, I revised it with a new mimeograph rule set, still just for our own use. But when we went to early GenCons, a copy got into Gary's hands, and thanks to some advocacy by Tim Kask, they revised the rules once more and published them in the Eldritch Wizardry supplement. Tim added the Chariot spell at the time (it was not one of my original spells, and the misspelling of my name was deliberate). I consider this my first published game design, although Bunnies & Burrows was released the same year (1976).


As with the monk in the Blackmoor supplement, druids of higher levels must vie against one another in (spell) combat in order to gain additional levels, a requirement possibly based on a historical belief, recounted in this passage from The War Against Gaul by Julius Caesar:


Over all these Druids one presides, who possesses supreme authority among them. Upon his death, if any individual among the rest is pre-eminent in dignity, he succeeds; but, if there are many equal, the election is made by the suffrages of the Druids; sometimes they even contend for the presidency with arms.

In terms of mistletoe, this was based on "historical facts connected with mistletoe" in Natural History by Pliny the Elder.  Many of the druid spells were based on the magical abilities of druids in Irish legends.  Spells from levels 1 to 7 are described.

According to Shannon Applecline, Kask worked with Gygax to develop a system for initiative, dividing the melee round into segments, based on adjusted dexterity. 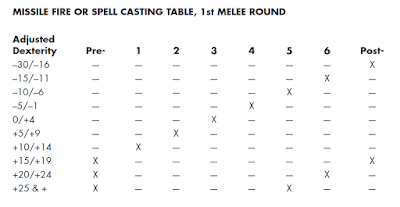 A system for determining when a character's actions take place, based upon their adjusted dexterity score.


The system prefigures the use of dexterity to determine initiative, as used in Metamorphosis Alpha (July, 1976) and Holmes Basic (1977), as well as the AD&D combat round, which was likewise divided into segments.

While somewhat involved, I find this system intriguing.  I've never used it, but would like to experiment with it, some day.  At the very least, the table listing bonuses and penalties for adjustments to dexterity could be incorporated into a Holmes game.
at May 16, 2020