D&D clerics have their roots in Dave Arneson's Blackmoor campaign.  The character type was originally conceived as a vampire hunter, inspired by Doctor Van Helsing, as portrayed by Peter Cushing in Dracula (1958), and recounted by Mike Mornard, here.

Mike Carr, author of B1 "In Search of the Unknown" played a village priest in Blackmoor, as recounted in an interview on the Comeback Inn in 2010, here, as well as Morrus' Unofficial Tabletop RPG News, more recently, here.

Cleric level titles were changed between the 1973 draft and the published version of the OD&D rules, as mentioned by Jon Peterson on his blog in February 2018, here.  When the OD&D rules were released in 1974, there were also level titles for "anti-clerics":

The level titles in the 1973 draft were all drawn from the Medieval Catholic Church.  A vicar was a type of "archpriest" while the use of the French term for "abbot" suggests that clerical strongholds might have been envisioned as monasteries.

In the published version, the 2nd level "friar" was replaced with "adept" (possibly in homage to  "Hiero's Journey"), the 4th level "priest" was dropped, shifting "vicar" and "curate" to include "bishop", and "abbot" was replaced with "lama" the Tibetan equivalent to an "abbot".

The blending of Medieval Catholic and Tibetan Buddhist terminology resulted in a lot of head-scratching, but is in keeping with the free-wheeling, mix and match style of the original game.  The term "lama" also denotes a "spiritual master" and may have had added significance:


Note that Clerics of 7th level and greater are either “Law” or “Chaos,” and there is a sharp distinction between them.  If a Patriarch receiving the above benefits changes sides, all the benefits will immediately be removed!

It is important to recall that losing a level of experience for changing alignment was only first described in the AD&D DMs Guide (1979), although the Holmes Basic Rulebook (1977) did state that a DM could "penalize the character with a loss of experience points".

In OD&D, characters could therefore change alignment, even between "Law" and "Chaos", without losing a level of experience, including clerics below 7th level.  This is particularly interesting, given that "anti-clerics" could almost be considered a sub-class of clerics.


Note that underlined Clerical spells are reversed by evil Clerics.  Also, note the Clerics versus Undead Monsters table, indicating the strong effect of the various clerical levels upon the undead; however, evil Clerics do not have this effect, the entire effect being lost.

Anti-clerics, described as "shamans" at 3rd level (which implies a connection with barbarians or humanoid monsters) have access to different spells (only the reversed forms of certain spells are available), and are unable to turn undead.

Gary Gygax refined the distinction between "Law" and "Chaos" in relation to "Good" and Evil" pertaining to OD&D clerics in his article "The Meaning of Law and Chaos in Dungeons and Dragons and Their Relationships to Good and Evil" in SR #6: 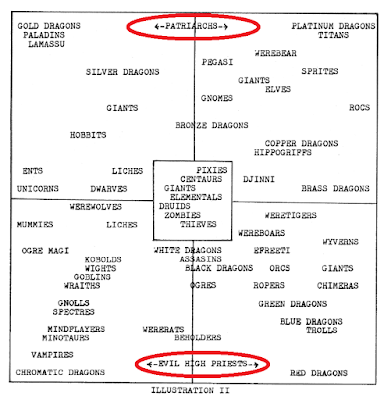 Clerics of either good or evil predisposition must likewise remain completely good or totally evil, although lateral movement might be allowed by the dungeonmaster, with or without divine retribution.  Those top-level clerics who fail to maintain their goodness or evilness must make some form of immediate atonement.  If they fail to do so they simply drop back to seventh level.

In terms of a belief system or pantheon for OD&D, this was intentionally kept vague, except for some tongue-in-cheek references:


I recall that I told Bob Sacks that in Greyhawk we do not have existing religions included, for this is a touchy area.  We have such groups as "The Church of the Latter Day Great Old Ones," Church of Crom, Scientist", "Brethren of St. Cuthbert of the Cudgle", and so on.  Gods sometimes intervene.  There are some artifacts and the like which aid clerics.  In general, however, clerics are powerful enough without much aid, for they have quite a few advantages and work up very quickly.

The publication of "Gods, Demi-Gods & Heroes" (1976) provided plenty of material to expand the OD&D setting, with descriptions of mythological gods that clerics could worship, as well as sections based on the writings of Robert E. Howard and Michael Moorcock.
at May 02, 2020