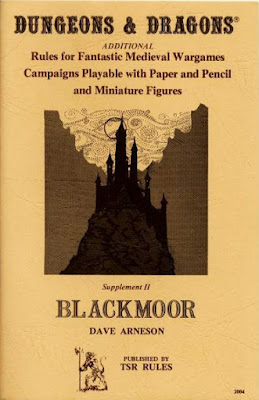 
The title page includes a dedication to Hugh Cantrell, as well as special thanks to Gary Gygax, Tim Kask, Rob Kuntz and Steve Marsh for suggestions and ideas.  The booklet is divided into 3 sections, one for each of the 3 volumes in the original D&D rules, beginning with Men & Magic.

The foreward by Gygax, dated Sept 1, 1975, credits Arneson as "the innovator of the "dungeon adventure" concept, creator of ghastly monsters, and inscrutable dungeonmaster par excellence." stating "I would rather play in his campaign than any other".

In deconstructing the various contributors, a Blackmoor Supplement origination project was started by Geoffrey McKinney on Dragonsfoot, back in 2006.  The subject was revisited by Daniel Boggs in Sorting Supplement II on OD&D Discussion in 2010.

The concept for the monk as a character class likely originated in Dave Arneson's Blackmoor campaign (Richard Snider had a character named "The Flying Monk") although was probably modified by Brian Blume:


In its early development, the D&D game was supplemented by various booklets, and in one of these the monk, inspired by Brian Blume and the book series called The Destroyer, was appended to the characters playable.

Gygax later went on record to describe the primary source of inspiration:


...as to the original Monk class, I envisaged them mainly as wanderers from afar, some few being established in monasteries in the non-Oriental (or whatever name one might choose to describe a place of like cultures, states and societies).  If you ever saw the TV series Kung Fu, that was rather the model I used for the monk PC as far as general interaction in the campaign--sans the racism. 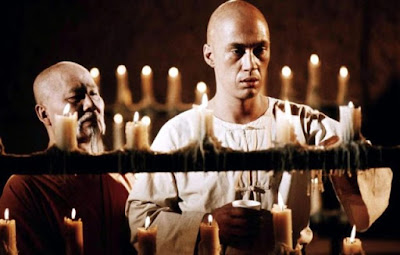 
Although fairly powerful, there is only one monk for each level above the 6th (Grand Master) and contenders of sufficient experience are therefore obliged to seek out monks of the next higher level, and defeat them in a fair fight, in order to advance. 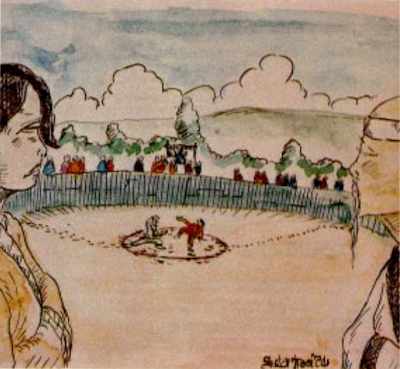 
Rules for monkish combat are given in The Dragon #2 in an article by John M. Seaton, entitled "Monkish Combat in the Arena of Promotion" (Aug, 1976).  Another article describing monkish weapons was published in The Dragon #18 (Sept, 1978).

The monk was used as the basis for the mystic NPC class in the D&D Master Set rules (1985) compiled by Frank Mentzer, as deconstructed in this thread.  Rules for cloister life (based on medieval Benedictine monks), PC mystics, martial arts, and acrobatics were also included.

GAZ 3 "The Principalities of Glantri" (1987) by Bruce Heard describes the Hospice of Mystic Healers and a Great Saffron Mystic seated at Lhamsa (modeled after Lhasa in Tibet) in the Colossus Mounts of Glantri, in the Known World/Mystara setting.

The concept for the assassin as a character class may have originated in Dave Arneson's Blackmoor campaign, with a character named "Skandros the Strangler", who is described as "a master of disguise" in DA1 "Adventures in Blackmoor" (1986). 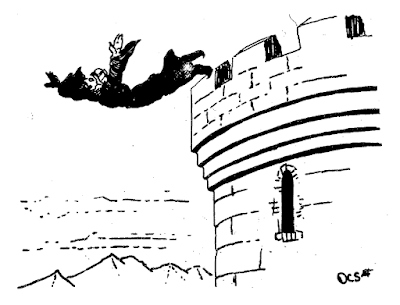 
A review of the historical Order of Assassins was published in The Dragon #22 in an article by James E. Bruner, entitled "The First Assassins", focusing on the biography of their founder Hasan Sabbah, he whom Latin crusaders referred to as "The Old Man of the Mountain".

The assassin was used as the basis for the thug NPC in the D&D Master Set rules (1985) compiled by Frank Mentzer.  GAZ 3 "The Principalities of Glantri" (1987) by Bruce Heard describes a Thugs' Guild in the Known World/Mystara setting.

Hit location tables are provided for multiple body types (humanoid, avian, reptile, insectoid, fish, snake) along with rules for what attacks result in death or mortal wounds, non-cumulative wounds, crippling, or movement restrictions.  There is also a weapon/height adjustment matrix.

Drawn from Arneson's Blackmoor campaign, the rules provided reappeared in modified form in Arneson and Snider's "Adventures in Fantasy" game (1979).

Although we experimented with Critical Hits and Fumbles back in the day (using the article "Good Hits and Bad Misses" from The Dragon #39, July, 1980), we didn't have access to the Blackmoor supplement until much later, and so never explored Arneson's system.
at March 07, 2020