The Temple of the Frog

Dave Arneson described the inspiration behind the original Temple of the Frog in his forward to the d20 version of this adventure, published in 2008:


Huffing and puffing behind the great cutting machine, my eyes filled with sweat: there, looming above the grass was a great edifice — apparently shaped out of porcelain in the shape of a frog. Halting, I shut down the machine and carried the thing to a lake of concrete, then returned it to its resting place in the grasses and labored on. Thus, I came to dislike that frog (really a toad painted to look like a frog!). Working on, I sought some form of retribution to this obstacle.

Soon the grasses stopped growing and the Frog went downstairs to rest atop the gaming table. When next the brave adventurers assembled all they could see was a frog surrounded by buildings. “Oh, oh.” they muttered. “Now what?”

The “what” was the infamous Temple of The Frog. The background explained — slave runners, lots of trackless swamp, etc. — the party sought to enter the Temple. Lots of action, killing. Finally the main secrets were unlocked and the temple destroyed.

It hopped off into the swamps to reappear again at a later date. (More, muttering!)


The Temple of the Frog:

The scenario published in the Blackmoor supplement is a misunderstood classic.  The perfect centerpiece for a campaign involving a mysterious cult, in which the PCs must first locate the temple, and then penetrate its well-defended secrets.

The founding ideology motivating The Brothers of the Swamp is to breed a race of killer frogs to destroy human civilization.  These amphibian abominations, tended by the Keepers of the Frogs, are sustained by prisoners kidnapped by a network of bandit raiders.

Over time, antipathy developed between the Brothers and the Keepers, while the bandit raiders grew in power.  Things changed with the arrival of an enigmatic individual known only as Stephen the Rock, who assumed control of the order, crushing the bandits.

The town was rebuilt, and the Temple modified to assume the form of a giant frog of the swamp.  Trade resumed, with a network of outposts to ensure the location of the Temple remained hidden, and the power of the Brothers became greater than ever.


The Town and the Temple 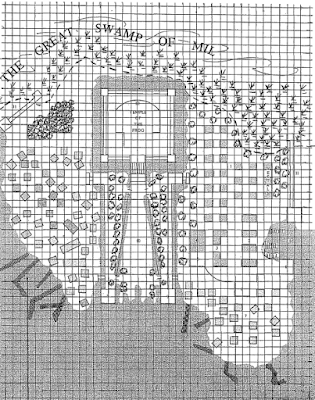 Map of the Temple of the Frog and its environs, from the Blackmoor supplement (1975).  The grid appears to have been drawn over the original map.


The map of the Temple depicts its moat ("teeming with killer frogs and other unpleasant beasts") and surrounding walls.  The gardens to the south lead to the royal docks, protected by towers, surmounted by catapults, and a garrison of 150 men.

The quarters of the brothers, temple vestals, refectory, and guards reserve barracks, lie to the east, beside the warehouses and harbor.  The southern part of the town is occupied by 200 people, mostly dock workers and semi-skilled artisans.

The area to the west comprises the bulk of the town, with some 400-500 inhabitants, catering to the needs of the raiders and merchants from the surrounding outposts.  The warehouses here are used to hold slaves and cargo from the merchant ships.


The High Priest of the Temple of the Frog:

Stephen Rocheford, the player in Arneson's campaign who conceived of the nefarious villain "Stephen the Rock" corresponded with Daniel Boggs about his discussions with Arneson, as shared by Boggs over at The Comeback Inn in 2010, here.

It's interesting to note the influence of "Patterns of Force" from Star Trek: The Original Series (Season 2, Episode 21) as a source of inspiration for the character of Stephen the Rock, the High Priest of the Temple of the Frog.

Stephen possesses battle armor (+3 mail, granting 18 (00) Strength and 18 Dexterity, and permitting flight, in addition to several extraordinary defenses), a +3 shield (with anti-magic and spell-turning capabilities), and a +3 sword (shoots lightning bolts, can break other weapons).

The High Priest also has access to a Medical Kit (which can heal wounds, and even revive the dead, provided enough time) and a Communications Module (which can teleport individuals to an orbiting satellite station, far above).

Stephen the Rock is an exceptionally challenging opponent, the answer to any party of high-level power gamers.  Coupled with his ability to communicate and command the obedience of others through a network of special rings, he becomes virtually unbeatable.

Table of Rings, from the Blackmoor supplement, demonstrating the relationship between magical rings granting access to certain parts of the Temple of the Frog, but also commanding obedience to ring bearers higher in the chain of command.


The High Priest's ring has the combined powers of each lesser ring.  The Keeper's rings control the killer frogs and frogmen, while the Temple Guard's rings command obedience to those of higher rank, as do the Acolyte's rings to those wearing the Priest's rings.


The Ground Floor of the Temple of the Frog

The ground floor of the temple can accommodate 300 people in the pews, with standing room for several hundred more.  The north end is dominated by a huge sacrificial pit, into which the almost daily ritual of the feeding of the frogs is enacted.

The main library of the Temple is also located here, containing "over 10,000 volumes in every conceivable tongue (most of which are unknown)" representing "as much as 10% of all the world's books" any of which would be highly valued by a sage.

The head librarian's research area is nearby, with access to a small underground vault, holding three special treasure maps.  One of these is notable for mentioning "the land of the Red Coven", originally referenced years previously, in an early campaign letter:


To the NW lie the accursed lands of the unholy RED WIZARDS COVEN whose lands are more dangerous than even the wizards themselves.

Another feature of the ground floor is the great wind pipe organ, "worth several hundred thousand in gold", on which Toccata and Fugue in D Minor is played, during the feeding of the frogs, according to Rocheford.

Finally, there is a secret control room, known only to the High Priest, which is able to shift the entire Temple into "a parallel time area" while creating the optical illusion of a giant frog in its place, appearing to leap away, into the swamp mists.

The second floor contains additional seating for another 300 people, in addition to Catholic-style confessionals.  The latter can be repurposed into private viewing boxes, for visitors to the Temple who wish to remain unobserved.


First Level of the Dungeon

The first level of the dungeon contains barracks for the temple soldiers, although occupancy is anywhere from 30-80% at any given time.  Other areas include secret gambling halls, officers quarters, hidden crypts, and giant rat warrens.

More powerful creatures on this level include a trio of imprisoned medusae (who hate the Brothers) and several gargoyles in temporal stasis (who can be awakened).


Second Level of the Dungeon

Location of the breeding pond, lair of 1,100-1,200 killer frogs.  An island in the center of the pond contains 240 frog people, having similar characteristics to mermen, armed with net and trident.  Several are more powerful, with greater hit dice.

Parties who make it into the second level of the dungeon will want to complete their objectives and get out while they still can.  The ecological naturalism and high numbers of opponents are other similarities to the G series by Gygax.