The Blackmoor supplement included statistics for several new aquatic monsters and magic items.  Many of these were contributed by Steve Marsh, as mentioned by Gary Gygax in the preface to the AD&D 1e Monster Manual:


It is necessary to acknowledge the contributions of the following persons: Steve Marsh for devising the creatures for undersea encounters which originally appeared in BLACKMOOR, as I have radically altered them herein

Marsh had previously submitted material to Gygax detailing the elemental plane of water, as mentioned in this interview from 2016.  Daniel Boggs speculated which new monsters were contributed by Marsh in this post.

Mermen: Previously mentioned in OD&D vol 2, these differ from the mermen described in the 1e Monster Manual or D&D Expert Set.  They sustain damage when out of the water, and are bipedal (able to board ships, and to ride giant seahorses) akin to Tritons in X7 "The War Rafts of Kron" 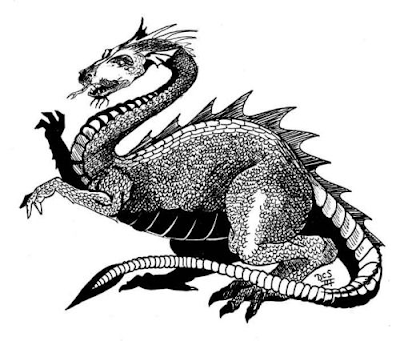 A wingless dragon, from an advertisement for The Dragon magazine, in The Strategic Review vol 2, no 2.  Illustration by David Sutherland.


Fire Lizard: Also called the "false dragon" being identical in appearance to dragons, although without wings.  An illustration perhaps originally intended to represent a fire lizard was used in an advertisement for The Dragon magazine (above).

Minotaur Lizard: These "in no way resemble dragons or fire lizards" although unclear whether this is a misspelling of "monitor lizard" which better fits the description.

Illustration of a plesiosaur, by David Sutherland, appearing in module X1 "The Isle of Dread" (1981)


Aquatic Dinosaurs: Elasmosaurus, Mososaurus (the basis for the Tylosaurus appearing in AC9 "Creature Catalog"), Plesiosaurus (appearing in X1 "The Isle of Dread")

Portugese Man-Of-War: Appearing in X7 "The War Rafts of Kron"

*included in the 1981 Expert Rulebook

Dolphins: "will attack sharks on sight whenever the odds are less than three to two against the dolphins" also appearing in X7 "The War Rafts of Kron"

Aquatic Elves: "Also called sea elves, they are akin to mermen as land elves are to men".  "They are mortal enemies of sharks and sahuagin" and "are friends to dolphins and land elves"  Also appearing in AC9 "Creature Catalog" 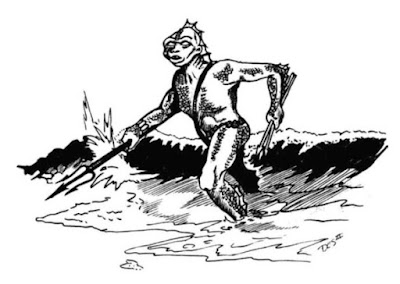 A sahuagin emerges from the deep.  Illustration from the Blackmoor supplement, by David Sutherland.


The Sahuagin (Devil-Men of the Deep):  Marsh discussed the inspiration for the sahuagin in this thread on Dragonsfoot:


This is one of the races I did that ended up in Blackmoor. The name is a Spanish name of an historian that came off the back of the Christ in the Americas pamphlet used by the LDS Church. Like the Ixit, there are two "official" pronunciations. First, pronounce it like you would in Spanish class. Second, Sa ha gwin (which is not intuitive).

An old Justice League of America animated show and my own imagination provided the concept, with a heavy touch of sea Aztecs and the question what would evolved sharks as a social species be like.

MM has so much detail because Blackmoor had so much detail. Not a Lovecraft influenced creature (I've done a lot of those, mind you, just not this one).

The animated show Marsh refers to could have been "The Rampaging Reptile-Men", the second episode of the "Aquaman" TV show, which originally aired in 1967 (and is presently viewable here), as originally discussed on an episode of DDOCast in 2010, here.

The Sahuagin are also the basis for the Shark-Kin appearing in AC9 "Creature Catalog" (1986).

Morkoth/Morlock: "shrouded wraith of the deep who makes his home in a series of spiraling tunnels" inspired by a terrestrial creature from a Witch World story.  The basis for the Mesmer appearing in AC9 "Creature Catalog"

Lycanthropes: Additional rules are given regarding lycanthropy.

All of the new magic items seem designed for the purposes of underwater adventures: