Soon after Gary Gygax began running adventures beneath Greyhawk Castle, Rob Kuntz started designing his own dungeon levels, beneath another castle ruin, that of El Raja Key (a name derived from the initials of his full name, Robert J. Kuntz), as discussed, here. 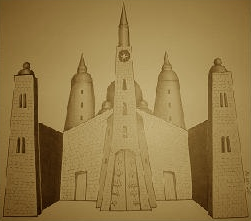 The front entrance to El Raja Key, from an imagined cover for the unpublished Kalibruhn supplement, as conceived by Grendlewulf. Illustration by Andy "ATOM" Taylor.


It's notable to recall that Kuntz was only 17 years old at the time, but would soon begin running games for Gygax himself in a shared pre-D&D campaign world, where the dungeons beneath El Raja Key would soon rival those of Greyhawk Castle, in scope and legend.

Kuntz eventually became co-DM of the OD&D Greyhawk campaign, to which he would contribute many of the dungeon levels from El Raja Key for the second iteration of Greyhawk Castle, involving several dozen levels in 5 interconnected stacks (to be covered in a future post).

I have a copy of the basic edition of the Archive, and the hand-drawn maps for the dungeons beneath El Raja Key are fascinating to behold.  What follows is a brief overview of one of the earliest and most gameable of old school megadungeons.

Level 2 - Includes 18 keyed encounter areas, among which is a deadly invisible maze, and its guardians.  There is also an NPC described as the "Assassin of the Greenclaw" although I'm uncertain whether this represents an Assassin character, as per the Blackmoor supplement.

Level 3 - Includes 21 keyed encounter areas.  There is an intriguing description given for the spirit animating the statuette of a little frog, a new Figurine of Wondrous Power, similar to the Ebony Fly described in the Greyhawk supplement.

The first three levels of El Raja Key were at one time planned to be released in a special collector's edition by Pied Piper Publishing (discussed here, and here on Kuntz's "Lord of the Green Dragons" blog, back in 2009), but I don't think the project ever came to fruition.

The lower dungeon levels are not presented with keys, but many involve some notable central feature:

Level 5 - Features a strange gallery in the upper northeast quadrant.


Level 5.5 - A vast series of mines, with a smelter for a mysterious ore.


Level 7.5 - The Black Reservoir, accessed by a separate, hidden entrance through a tree stump in the swamp near the castle.

This level was incorporated into the second iteration of Greyhawk Castle, after Rob Kuntz became co-DM of the Greyhawk campaign, as mentioned here on the Acaeum forums.

A session with Ernie Gygax's character Erac was later featured in the article "The Expedition Into the Black Reservoir" (El Conquistador, vol. 1, no. 12, August 1974).

Level 9 - A central cavern, containing a number of gambling machines.

Level 10 - Used for the Greater Caverns of Tsojconth.


In addition to being incorporated into the second iteration of Greyhawk Castle, design elements for this level, most notably the circular, central chamber, were used for the deeper, second level of "The Lost Caverns of Tsojconth", the tournament adventure for Wintercon V in 1976, as discussed by grodog, here.

Years later, Gygax would relate memorable episodes from the original Lake Geneva campaign in a series of articles in Dragon magazine from 2001-2004, entitled "Up on a Soapbox".  Those concerning El Raja Key include:


An encounter involving Gary's first character, Yrag the fighter, on the 1st level of the dungeon, is given in "Dungeon Hospitality - Falling for the Obvious" published in Dragon #292 (Feb, 2002).

Yrag discovers a ring of contrariness on the 3rd level of the dungeon, as recounted in "The Rewards of Roleplaying - Virtue Brings More Than Its Own Reward" published in Dragon #297 (July, 2002).

Mordenkinen's efforts to descend past the black pudding on the 6th level of the dungeon is described in "How to Train a Black Pudding - If You Can't Stand the Heat..." published in Dragon #289 (Nov, 2001).

Mordenkinen and his companions face a series of challenges on the 11th level of the dungeon, in order to gain a huge, faceted diamond, in "Best Shots - The Folly of Predictability" published in Dragon #306 (Apr, 2003).

Mordenkinen and Bigby's legendary encounter with an iron golem, in which Yrak is later slain, is told in "The Devious DM - The Other Side of the Screen" published in Dragon #307 (May, 2003).


The final story was originally recounted in an article by Gygax, entitled "Swords and Sorcery - In Wargaming" (Wargamer's Digest, vol. 1, no. 7, May 1974), which was republished with new, full-color illustrations in Dungeon #112 (July 2004).


...its unstable magic caused it to appear and disappear throughout time and space. Its reappearance would thereafter be considered an ominous event and lead to legends about it from among those places in which it occurred.  This allowed me to "place" the castle within the ongoing storyline wherever I wished and to extrapolate a building story as to why it was thus occurring.

The megadungeon beneath El Raja Key is eminently playable, and would be well-suited to either an OD&D or B/X campaign.  Although the deeper levels aren't keyed, one could either use the Monster & Treasure Assortment (1977) or stock by choice.

Since the castle of El Raja Key would frequently change locations in Kuntz's "World of Kalibruhn" even hopping "dimensions" into the "World of Greyhawk" and elsewhere, there's no reason why it couldn't suddenly appear in the DM's own campaign world.

Beginning PCs might join forces in order to explore the mysterious castle in such a scenario.  The megadungeon is massive enough to accommodate multiple groups, while also being manageable in size.  I could easily see players reaching levels 10+ in such a campaign.
at February 29, 2020