Rob Kuntz prepared "Sunken City" as the D&D tournament adventure for Gen Con VIII, held August 22-24, 1975 at Horticultural Hall, Lake Geneva WI.  Revised and expanded, the adventure was released for use with Dungeons & Dragons by TLB games in 2016. 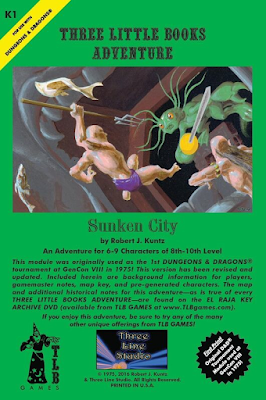 Melan posted an excellent review of the module, in 2017.

Kuntz was already conceptualizing his "World of Kalibruhn" campaign, as early as 1973, the setting for his castle of "El Raja Key" and the "Lost City of the Elders".

In fact, "Kalibruhn" was almost published as OD&D supplement V in 1976.

The Sunken City is known as "Kyrruhn" (meaning "greatly accursed") by locals, a corruption of its original name of "Kalibruhn".

A coastal city, it was destroyed by an immense tidal wave.  The ruins are now submerged under 40 feet of water, although some of the taller buildings rise 10 to 30 feet above the surface.  Many of these are structurally unsound.

Kuntz had previously introduced a group of players to the Sunken City, prior to running it at Gen Con VIII, although their expedition was short-lived:


... a group investigating an area of the sunken city above the water line rounded the corner while investigating a complex of buildings.  A high level magic-user rounded the corner and, winning initiative, cast a particularly deadly spell that excised the heart right out of a randomly determined NPC fighter in the party.  Well he dropped dead instantly, and one player, Jim Goodfellow issued a high pitch scream stating his character ran away at top speed!  The other fledglings turned wattles and fled right after him.  That was their first and last encounter within the Sunken City of Kalibruhn!

In the preface to the module, Kuntz states that this encounter was the only one with a prior history, and that everything else was made up on the spot.

The module contains a section on entering the Sunken City using rafts, negotiating its environmental hazards, and an overview of the various structures and random encounters.  There's a wandering monster table, as well as a floating debris/treasure table.

One of the buildings is an abandoned wizard's tower, VeJoun the Machinist, who specialized in clockwork mechanisms.  Another is haunted by a malignant spirit.  Yet another is inhabited by a powerful necromancer, who wields ancient, deadly spells (see above).

There are several new monsters, unique to Kuntz's "World of Kalibruhn" campaign, that serve to keep experienced players on their toes.  Some of these are aquatic, while others are undead.  One has a reputation, namely Za-Kark-Ksh, the Glutton, a legendary sea-troll.

There are also new magic items, including some fairly powerful ones, with names like "Zelles'sepda's Osspuncta" (a bone wand made from a legendary necromancer's hand), "The Master's Hand" (a sword forged of meteorite iron), and "The Inter-Dimensional Agereator".

In order to run this adventure, one also needs a copy of the "El Raja Key Archive" (2016) a digital collection of Kuntz's maps, illustrations, and notes.  The map for the Sunken City is downloadable from the Archive (the map on the back cover of the module is only partial). 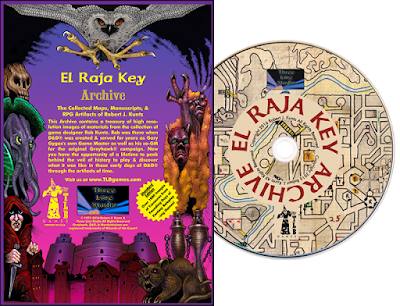 
The Wreck of the Revenant:

There is an intriguing backstory to the adventure.  The PCs can obtain clues to the location of a sunken ship, which holds the secret behind the destruction of the city (the subject of a planned, forthcoming mini-adventure by Kuntz).

The adventure is designed for 6-9 characters of 8th-10th level.  Six pre-generated characters are included, complete with backgrounds.  These are based on PCs in Kuntz's original campaign, played by Terry Kuntz, and others.

I had the pleasure of adventuring in the Sunken City, in a session run by Paul Stormberg at Gary Con X, in 2018.  He had us roll up characters (3d6, in order, of course) and allowed us to pick magic items from the rulebooks (since our characters were intermediate in level).

I rolled up a human, 8th level fighting-man "Vac-Tue" and outfitted him with plate +2/shield +1, a sword +2, crossbow of speed, and ring of spell-turning.  I also got 3 potions (water-breathing, speed, and invisibility).

Our group had a blast.  We narrowly escaped getting sucked into a sinkhole, battled Za-Kark-Ksh, the sea-troll, and raided the tower of VeJoun the Machinist.  One of the magic-users even figured out how to access VeJoun's clockwork "spellbook".


Using "Sunken City" in your campaign:

The Sunken City is a great adventure, and is highly recommended.  Nowadays, I would simply use the pregens and run through it in a few sessions.

As part of a campaign, the Sunken City of Kalibruhn might be located on the northern coast of any large island, or perhaps an unexplored, southern continent.
at February 22, 2020

Email ThisBlogThis!Share to TwitterShare to FacebookShare to Pinterest
Labels: Kalibruhn