In OD&D vol. 1, Men & Magic, we find reference to a sinister "underworld" beneath the ruins of an ancient castle, in the section "Preparations for the Campaign":


First, the referee must draw out a minimum of half a dozen maps of the levels of his "underworld", people them with monsters of various horrid aspect, distribute treasure accordingly, and note the location of the latter two on keys, each corresponding to the appropriate level.  This operation will be more fully detailed in the third volume of these rules.  When this task is completed the participants can then be allowed to make their first descent into the dungeons beneath the "huge ruined pile, a vast castle built by generations of mad wizards and insane geniuses".

This captures the spirit of the original Greyhawk Castle, inspired by the dungeons beneath Dave Arneson's Blackmoor Castle, as well as David Megarry's Dungeon! board game.

Just as Arneson used the model for Branzoll Castle in his Blackmoor campaign, Gygax used Bodenburg Castle to represent the ruined upper works of Greyhawk Castle. 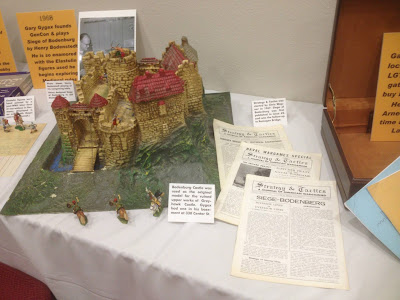 Model of Bodenburg Castle, part of the "Legends of Wargaming" exhibit at Gary Con VI in 2014.  Photograph posted on Facebook, courtesy of Allan Grohe.


In OD&D vol. 3, The Underworld & Wilderness Adventures, Gygax provides a brief description of the dungeons beneath Greyhawk Castle:


"Greyhawk Castle", for example, has over a dozen levels in succession downwards, more than that number branching from these, and not less than two new levels under construction at any given time. These levels contain such things as a museum from another age, an underground lake, a series of caverns filled with giant fungi, a bowling alley for 20' high Giants, an arena of evil, crypts, and so on.


Further details were provided in "How to Set Up Your Dungeons & Dragons Campaign (Part II of a Series), published in the fanzine Europa 6-8 (April, 1975):


Before the rules for D&D were published 'Old Greyhawk Castle' was 13 levels deep.  The first level was a simple maze of rooms and corridors, for none of the participants had ever played such a game before.  The second level had two unusual items, a Nixie pool and a fountain of snakes.  The third featured a torture chamber and many small cells and prison rooms.  The forth was a level of crypts and undead.  The fifth was centered around a strange font of black fire and gargoyles.  The sixth was a repeating maze with dozens of wild hogs (3 dice) in inconvenient spots, naturally backed up by appropriate numbers of Wereboars.  The seventh was centered around a circular labyrinth and a street of masses of ogres.  The eighth through tenth levels were caves and caverns featuring Trolls, giant insects, and a transporter nexus with an evil wizard (with a number of tough associates) guarding it.  The eleventh level was the home of the most powerful wizard in the castle.  He had Balrogs as servants.  The remainder of the level was populated by Martian White Apes, except the sub-passage system underneath the corridors which was full of poisonous critters with no treasure.  Level twelve was filled with Dragons.  The bottom level, number thirteen, contained an inescapable slide which took the players 'clear through to China', from whence they had to return via 'Outdoor Adventure'.  It was quite possible to journey downward to the bottom level by an insidious series of slanting passages which began on the second level, but the likelihood of following such a route unknowingly didn't become too great until the seventh or eighth level.  Of the dozen or so who played on a fairly regular basis, four made the lowest level and took the trip: Rob Kuntz, now a co-referee in the campaign went alone; and three of his friends managed to trace part of his route and blunder along the rest, so they followed him quickly to the Land of China.  Side levels included a barracks with Orcs, Hobgoblins, and Gnolls continually warring with each other, a museum, a huge arena, an underground lake, a Giant's home, and a garden of fungi.

The maps for Gary's original dungeon were probably similar in design to those published in Dungeon Geomorphs Sets One-Three (1976, 1977), as discussed in this post from 2013, on the Random Wizard blog.

Gygax apparently used the first level of the original Greyhawk Castle dungeon for a demonstration of how D&D is played at Origins II (July 23-25, 1976), as discussed in this thread from 2014, on The Acaeum Forums. 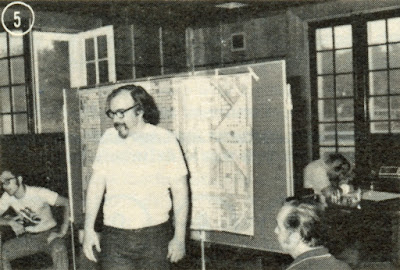 "Gary Gygax, creator of DUNGEONS & DRAGONS led a group of novice adventurers through his demonstration game on Friday evening before a standing room only crowd." from The General, vol. 13 no. 2 (Jul-Aug, 1976)


A portion of the map used at Origins II appears to be identical to a part of the map of the Greyhawk Castle dungeon used by Gygax at a convention game in 2007, as identified by Zenopus later in the same thread.

Years later, Gygax would relate memorable episodes from the earliest years of the Greyhawk campaign in a series of articles in Dragon magazine from 2001-2004, entitled "Up on a Soapbox".  Those concerning the original Greyhawk Castle include:


An encounter with kobolds and their treasure on the 1st level of the dungeon in "Penny for Your Thoughts" published in Dragon #302 (Dec, 2002).

A description of the progressively deadlier features of pit traps (open pits on the 1st level, covered pits on the 2nd level, etc.) in "Ain't it the Pits?  A Trap for all Occasions" published in Dragon #294 (Apr, 2002).

Obmi, the dwarf, the "first real villain of Greyhawk Castle" in a large chamber in the center of the 3rd level, with gnoll servitors operating a repulsion ray, in "So This Lousy Dwarf With Boots of Speed - Enter Obmi" published in Dragon #287 (Sept, 2001).

An extension of the 4th level, occupied by a large band of gnolls, and the discovery of the first "portable hole", in "Place It, and They Will Come - Defying the Odds" published in Dragon #296 (Jun, 2002).

A description of the labyrinth occupying the 6th level, its denizens and hidden treasures, in "Sooner or Later, Luck Favors the DM - Looting the Labyrinth" published in Dragon #291 (Jan, 2002).

The 7th level, "centered around a circular labyrinth" is probably described in "Direction Sense - A Stairway to Nowhere" published in Dragon #293 (Mar, 2002).

An elusive, golden, bejeweled creature, encountered somewhere "around the dungeon's 8th level" in "The One That Got Away - The Jeweled Man" published in Dragon #290 (Dec, 2001).

The path by which a few notable PCs descended to the 13th level, then to the opposite side of the planet, in "Sherlock Holmes or Sheer Luck?  Unbelievable, But True" published in Dragon #295 (May, 2002).


For those wishing to learn more, Allan Grohe's Greyhawk Castle Archive is, without a doubt, the most comprehensive source of information regarding the original Greyhawk Castle on the internet.

Update (Jan 18, 2020): For a deep dive into the most recent insights concerning the original Greyhawk Castle dungeon, check out this thread on the Knights & Knaves Alehouse, the latter entries in particular, which include newly uncovered maps
at January 11, 2020

Email ThisBlogThis!Share to TwitterShare to FacebookShare to Pinterest
Labels: Greyhawk