In the months following the release of Dungeons & Dragons (Jan, 1974), Gary Gygax published several pieces of short fiction, inspired by memorable episodes drawn from the original Greyhawk campaign.  Let's have a look at each of these, in turn:


Swords and Sorcery - In Wargaming

The article "Swords and Sorcery - In Wargaming" (Wargamer's Digest, vol. 1, no. 7, May 1974) recounts a session refereed by Rob Kuntz, in which Gary's legendary characters "Mordenkinen" (a 13th level magic-user), his companion "Bigby" (an 11th level magic-user), the Lords "Yrag" and "Felnorith" (9th level fighting-men), and the Bishop "Raunalf" (a 6th level cleric) explore the 4th level of a dungeon (probably Kuntz's "El Raja Key"). 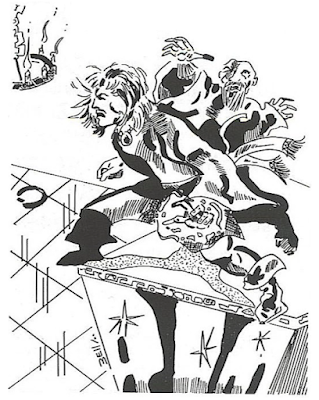 Mordenkinen (foreground) and Bigby perch atop an ivory pillar in the Great Hall, seeking to escape the reach of an iron golem.  Illustration by Greg Bell.


The twain encounter a magical guardian, previously referenced in OD&D vol 2 Men & Magic, under the entry for "Living Statues":


Various stone and metal monsters which come to life if trespass into a certain area is made. One of these monsters was iron, impervious to all weapons save two special ones he guarded, had a fiery breath, poison sword, and a whip of Cockatrice feathers which turned the thing struck by it to stone.

Mordenkinen is turned to stone, after which Bigby teleports to safety and returns with reinforcements.  He meets the same fate as Mordenkinen, and the Lord Yrag is also slain, before the Lord Felnorith is finally able to defeat the magical guardian. 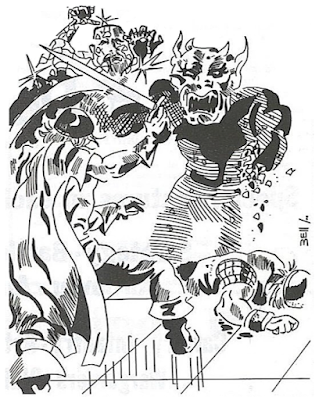 The doughty Lord Felnorith confronts a fearsome iron golem across the fallen body of Yrag, with a petrified Bigby in the background.  Illustration by Greg Bell.


The Expedition Into the Black Reservoir

An adventure into the dungeons beneath Greyhawk Castle* is recounted in "The Expedition Into the Black Reservoir" (El Conquistador, vol. 1, no. 12, August 1974), featuring Ernie Gygax's character Erac, along with the lama Londlar (a 7th level cleric), the dwarf swordsman Nulfyke (3rd level), and the acolyte Ugubb of the Lake of Crystals (a 1st level cleric).

*according to Allan Grohe "the Black Reservoir level was originally Castle El Raja Key, and was moved into the Expanded Greyhawk Castle after Rob Kuntz became co-DM of the campaign.  The original map is included in Rob's El Raja Key Archive @ http://www.tlbgames.com/collections/archive" as mentioned here on the Acaeum forums

Erac would later perish on a return visit, as recounted by Scott Gregg in a post on the Doomsday message boards, in March, 2004:


Erac was a lawful good wizard who reached the level of Warlock (6th level)* adventuring in and around the ruins of Greyhawk Castle.  On one expedition into the dungeons below the castle, while exploring the sixth dungeon level, he discovered a small sublevel separated from the main dungeon by a single corridor.  At the end of the corridor, Erac discovered a small area containing many small, shallow wading pools, the ceiling overhead was decorated to look like a star-filled night sky.  Upon entering the area, a wall slammed shut behind him, cutting him off from the main dungeon and trapping him in the newly discovered sublevel.  Erac never discovered the secret for escaping his prison, and eventually he succumbed to starvation.

Gygax relates a wilderness adventure, refereed by Rob Kuntz, in "The Giant's Bag" (Great Plains Game Players Newsletter #7, April 1975).  The sorcerer Nestre (a 9th level magic-user) was likely played by Ernie Gygax (the character's name, like "Tenser", is an anagram of "Ernest").

Another expedition into the dungeons beneath Greyhawk Castle is described in "The Magician's Ring" (Wargamer's Digest, vol. 2, no. 8, June 1975).  Lessnard the magician (a 6th level magic-user) was played by Mike Mornard.

Some of Mike's early gaming experiences are related in this thread on the RPGnet forums, including the adventure published above:


Later in 1973, in Michael's last semester of high school, Lessnard returned to adventure beneath the ruins of Grehawk Castle.  Again Gary acted as Dungeon Master but this time Lessnard brought along three lackeys: Crum, a Veteran, St Cuthbert, and Acolyte, and Flopspell, a Medium.  Their adventure led them through a one way secret door, trapping them on a deep level of Greyhawk Castle.  As the foursome desperately sought a way back to the surface their numbers dwindled, first losing St. Cuthburt and, second, Crum.  In a series of amusing moments (for Gary), Flopspell tried to get the upper hand on Lessnard.  Despite the traitorous acts the two make it back to the surface.  The adventure so amused Gary that he immortalized the story as The Magician's Ring on the pages of Wargamer's Digest in June of 1975.


It's interesting to note that each of the above stories consistently use level titles to describe the characters involved.
at January 18, 2020
Email ThisBlogThis!Share to TwitterShare to FacebookShare to Pinterest
Labels: Greyhawk