The City of Greyhawk

"Blackmoor" is a village of small size (a one-horse town), while "Grayhawk" is a large city.  Both have maps with streets and buildings indicated, and players can have town adventures roaming around the bazaars, inns, taverns, shops, temples, and so on.  Venture into the Thieves' Quarter only at your own risk!

Illustration from "Outdoor Geomorphs, Set One (Walled City)" (1977), by David Sutherland.  A possible depiction of the City of Greyhawk?


Allan Grohe has previously noted that certain features of the City of Greyhawk are mentioned in the supporting text for "Outdoor Geomorphs, Set One (Walled City)" published in 1977.  Gygax also provides instructions for keying a city, and gives a few examples: 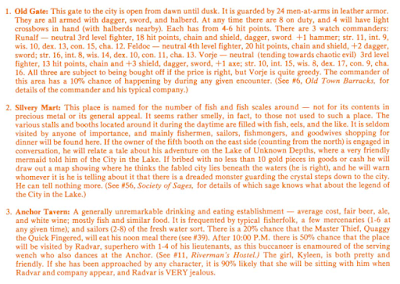 Gygax recounted the development of the City of Greyhawk in his article "To Forge a Fantasy World: Greyhawk's Creation" published in "Horsemen of the Apocalypse: Essays on Roleplaying" (2000), edited by Jim Dietz:


...now and then the bold adventurers needed a place to go to sell off loot, seek the services of mages or clerics, as well as for a change of pace.  In short, the players wanted a large community setting where they could manage special needs of their characters, and a place for those same swashbucklers to encounter the darker denizens of a city, experience other challenges quite different from those of underground dungeons.  Where else, it seemed, than a city of the same name as the castle.  So the City of Greyhawk sprung up as a single piece of graph paper around the same time that level four of the castle dungeon complex was being developed.

Only very gross details of the place were developed, save for the specific ones that the PCs (Player Characters) frequented.  Thus there were about a dozen inns and taverns that had developed floor plans, inhabitants, and so forth.  There were a score or so other locations that were likewise detailed – several temples, a wizard’s tower, the "Sages' Guild", the "Mercenaries Brotherhood", a few arms & armor dealers, merchant shops, and of course moneychangers and jewelers.  The wizard was never very helpful, and that was a role that was most enjoyable for the DM to assume.  Eventually an irate monk (played by Terry Kuntz) dared to paint that curmudgeony spell-worker’s tower with red and white barber-pole strips.  Of course the wizard took this in stride and styled himself the "Striped Mage of Greyhawk" thereafter.(1)  Another of the more amusing locations, this one of the merchant sort, was the "Mystical Trader" run by thieves who offered spurious magic items for sale, meantime doing the best to purloin the real ones possessed by the unsuspecting players.  Naturally, this establishment changed locations frequently, and the proprietors altered their appearance with each removal.

Two major adventuring areas were thus solidly in play early on 1973.  There were the castle ruins and its dungeons and there was the city, with key places that players' characters would likely visit indicated by color: red for a tavern or inn, gold for a money changer or gemner, gray for a weapon and arms dealer, green for a merchant, blue for a temple, purple for the place of a potent wizard, etc.(2)  Other areas around the city were developed on the spot as the need arose.  As a matter of fact, all of the adventures in the City of Greyhawk were "winged", created from whole cloth on the spot, for being so immersed in the game it was quite easy to create exciting encounters, and play character roles suitable for such a fantasy city.  The many players now active – out of some 30 total, 12 to 20 would typically show up for a play session – loved this.(3)  Even though the castle dungeon levels were deeper, the challenges greater, the rewards richer, proportionally more time was spent in "city adventuring."

This was initially surprising, as the lure of the hidden underground mazes and the many perils of the "wilderness" had been the primary interest of players.  Now, with the mazes of the city before them, and the many strange encounters possible therein, the group began to focus on the urban setting about half the time.  To manage this, this single map for the City of Greyhawk became four, and there was greater detailing of important areas thereon as a mnemonic device for the DM.

2) Arneson color-coded the various buildings in the Town of Blackmoor, and Gygax likewise provides advice on doing so in "Outdoor Geomorphs, Set One (Walled City)"

3) Providing some context for the paragraph in OD&D vol. 1 "Men & Magic" which states "At least one referee and from four to fifty players can be handled in any single campaign, but the referee to player ratio should be about 1:20 or thereabouts."
at January 12, 2020

Email ThisBlogThis!Share to TwitterShare to FacebookShare to Pinterest
Labels: Greyhawk