OD&D Supplement I: Greyhawk contains a puzzling illustration depicting a great stone head, reminiscent of an Easter Island moai carving, together with the caption "The Great Stone Face Enigma of Greyhawk", without accompanying text. 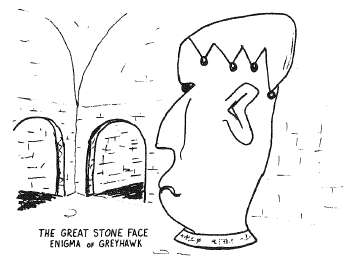 The Great Stone Face, or The Enigma of Greyhawk.  Illustration by Gary Gygax.


The mystery behind "The Great Stone Face" remains elusive.  The statue is often confused with the great bas-relief face in which the demon Fraz-Urb'luu was imprisoned (described in yesterday's post), which turns out to be completely unrelated.

An episode from the original Greyhawk campaign involving The Great Stone Face was recounted by Scott Gregg in a post on the Doomsday message boards, in March, 2004:


Erac's Cousin was lawful good, but he was also greedy, a trait that the wizard Bombadil was able to use to his advantage.  Deep in the dungeons of Greyhawk Castle there stands an enormous stone statue known as The Great Stone Face, or The Enigma of Greyhawk. A ring of strange runes circle the base of the statue, and the statue itself radiates magic. Many adventurers have tried in vain to unlock the enigma's secrets.  While adventuring alone in the dungeons Bombadil placed a Magic Mouth spell on the stone face that when triggered stated, "The ways of balance need to be maintained.  Give your most prized possession as a gift freely to one who walks the path of balance and your great reward will follow in short time."  Shortly thereafter Bombadil returned to the chamber of The Great Stone Face, this time accompanied by Erac's Cousin.  While exploring the area Bombadil conveniently placed himself out of hearing range of the spell.  As planned his unnamed companion triggered the spell, and a short time later donated a potent magic item to the sly Bombadil, who just happened to be the first neutral character Erac‘s cousin ran into.

What is the secret of the enigma?  Nobody knows for certain, although Gygax finishes his article with the following observation:


The moral of this brief tale is a simple one: If the DM places something that seems insoluble in the campaign, if it defies attempts to unravel its mystery for a prolonged period, the players will likely take over and make something else of it.