The City of the Gods

Dave Arneson's Blackmoor campaign was notable for its science fiction elements, as in The Temple of the Frog.  These were further influenced by John Snider's space exploration campaign, as explained by Greg Svenson in a post on The Comeback Inn:


Historically, by 1973 there was a concurrent Star Empires campaign, run by John Snider, going with an RPG element which we naturally combined with the Blackmoor campaign, making Blackmoor's world part of a star system in the Star Empires campaign (which was almost immediately quarantined due to the loss of several scout ships from two empires, one human and one avian)... 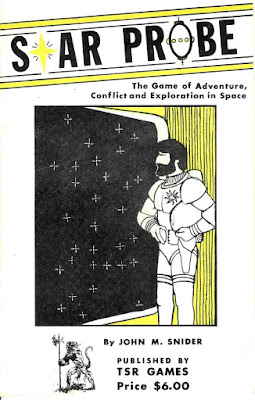 
Snider would go on to develop the "Star Probe" (1975) and "Star Empires" (1977) games with TSR.  A Star Empires RPG was never published, although may have influenced the "Star Frontiers" RPG (1982) edited by Steve Winter.


John Snider is a resident of the Twin Cities and a member of a large and active group of wargamers there.  This group, the Midwest Military Simulation Association, did much in the testing and refinement of the author's work.  As of this writing they are still engaged in a campaign, currently in a stage of imperial expansion, with one lost vessel from an avian race having had the misfortune of somehow arriving at the world of "Blackmoor" (and promptly losing all to an angry wizard whom they foolishly disturbed)!

In Judges Guild's "First Fantasy Campaign" (1977), Arneson mentions an ill-fated expedition to "the City of the Gods", in a desert on the Outdoor Survival map, during which several characters were lost (see Into the Great Outdoors). 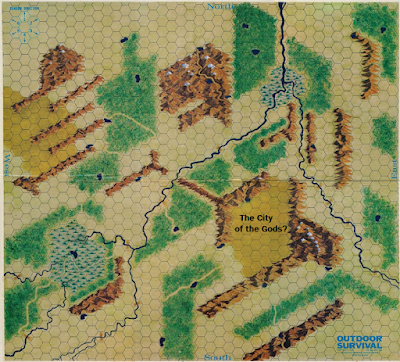 Possible location for the City of the Gods on the Outdoor Survival map "in the Desert south of Monson's old place".


The City of the Gods was apparently inspired by models of the Space Needle, constructed for the Seattle World's Fair, according to Arneson in a thread from the OD&D Discussion forums, here.  Arneson possibly used these to construct a futuristic city on his gaming table. 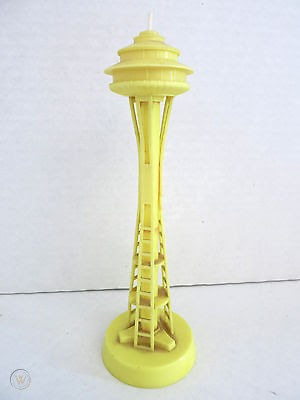 
When Arneson moved to Lake Geneva in early 1976, joining TSR as Research Director, he ran a game for Gary Gygax and Robert Kuntz at the Dungeon Hobby Shop, in which their famous characters Mordenkinen and Robilar explored the City of the Gods.

The details of this expedition are recounted in Oerth Journal #6 (Nov 1997), along with comments by Arneson, and an afterword by Kuntz.  A copy is downloadable at the Oerth Journal home page, here.  The tower that Robilar explored may have been the Space Needle.

Arneson's session was notable in that it represented a shared continuity between the first three D&D campaigns: Arneson's Blackmoor, Gygax's Greyhawk (in which Robilar had adventured), and Kuntz's El Raja Key (in which Mordenkinen had adventured). 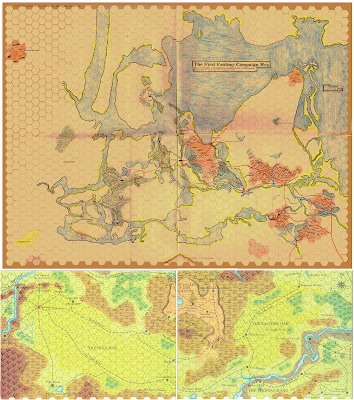 
The area known as the Valley of the Ancients first appeared in relation to Blackmoor along the southern border of the First Fantasy Campaign map, in reference to area 1.3 from Judges Guild's Wilderlands of High Fantasy campaign setting.

The BECMI version of this adventure, credited to Arneson and David Ritchie, was published in 1987.  Arneson stated that the module was mostly written by Ritchie, here.  It may have been Ritchie's idea to turn the City of the Gods into a crashed space ship.

The d20 version, written by Harley Stroh, was published by Zeitgeist Games in 2008, representing the most recent version of Arneson's original city.
at April 18, 2020