In OD&D vol. 1: Men & Magic, a continental setting is mentioned:


The "common tongue" spoken throughout the "continent" is known by most humans.

In a letter to Alarums & Excursions, Gary Gygax stated that the Castle and Crusade Society map of The Great Kingdom was based on the continent of North America:

The game world is a parallel earth, but the continents are somewhat different.  Most of our campaign activity takes place on what corresponds to North America, on the eastern half of the continent.  The "Blackmoor" lands lie far up on the northeast coast.  "Greyhawk" is in the central portion.  There are a few other independently run campaigns located on this map.  There are also some other dungeons related to the "Greyhawk" campaign located at some distance from the free city of Greyhawk.   Players in our campaign may freely play in "Blackmoor", but to get there they must adventure cross country.  With one or two other campaigns, we do not allow any cross-campaign play other than this, for these is too great a disparity of DMing.  The territory within 500 or so miles of our main dungeon is mapped out at 5 miles to the hex.  Territory within 50 miles of Greyhawk city is mapped more closely, and monster locations are indicated.  The entire world is mapped out in rough form, with notes regarding typical encounters in given areas as well as particular special places, for hardy souls who wish to go forth to seek their fortunes.

Gary Gygax, Alarums & Excursions #15 (October, 1976)
It's intriguing to note that an OD&D game world existed in rough draft.  Gygax later provided additional details in answer to a query regarding this pre-1978 campaign setting:

The planet was much like our earth.  Think of the world of Aerth as was presented for the MYTHUS FRPG.
The city of Greyhawk was located on the lakes in about the position that Chicago is, and Dyvers was north at the Milwaukee location.  The general culture was pseudo medieval European.  Some of the kingdoms shown on the WoG map were around the adventure-central area, the City of Greyhawk.
More details aren't really possible, as the sketch maps I used are long gone.

Q&A with Gary Gygax, En World, Apr 14, 2003
Gods, Demi-Gods & Heroes is often dismissed as nothing more than a high level "Monster Manual", but actually provides a great deal of material for such an OD&D campaign setting: 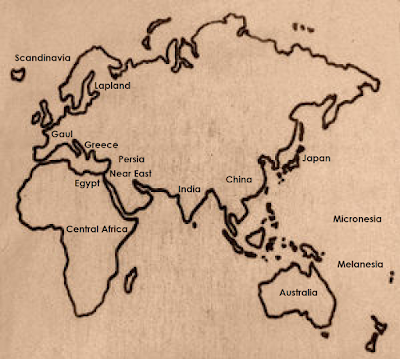 The mythos described in Gods, Demi-Gods & Heroes, as well in several articles published in The Dragon, provide a rich template for an OD&D game world, based upon several cultures in our own world.

Three characters in the original Greyhawk campaign were famously transported to "China" as described in an article by Gygax, published in Dragon #295 (May, 2002).
The entry for rakshasas in The Strategic Review #5 begins "Known first in India, these evil spirits encased in flesh are spreading".
In this vein, creatures drawn from Greek mythology, such as medusas and minotaurs, might have originated in "Greece" (and therefore speak Greek, as opposed to their own languages).
With respect to character classes, monks could be from "Tibet" (Gygax stated that he "envisaged them mainly as wanderers from afar"), samurai and ninja from "Japan", etc.
World of Greyhawk:
While Gygax ran his original Greyhawk campaign in a shared OD&D game world, in which Dave Arneson's Blackmoor campaign and Rob Kuntz's El Raja Key also existed, he later went on to create the separate "World of Greyhawk" setting for the AD&D game.
The Epic of Aerth:
Interestingly, we get the best glimpse into how the OD&D game world might have been envisioned from Gygax's "The Epic of Aerth" campaign setting, for the short-lived "Dangerous Journeys" RPG.
See the following links for maps of the World of Aerth, including the various continents.  Additional resources for Aerth include "Necropolis and the Land of Ægypt", the unpublished "City of Ascalon", and a trilogy of novels, written by Gygax.
at June 27, 2020
Email ThisBlogThis!Share to TwitterShare to FacebookShare to Pinterest
Labels: Blackmoor, Greyhawk, The OD&D Game World