The map of the Great Kingdom, depicting the territory of the Castle and Crusade Society, languished in obscurity for decades.  Its reproduction in Jon Peterson's book Playing at the World generated a lot of interest, when published in 2012: 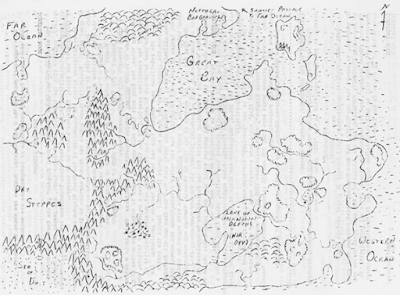 Map of the Great Kingdom, from Domesday Book #9.


The first mention of the "Great Kingdom" was in Domesday Book #6 (reproduced below, with minor edits for spelling, from History of D&D in 12 Treasures):


All members should be aware of efforts to create a mythical world for our Society.  To date we have a map showing our "Great Kingdom", as well as our neighbors - several sovereign principalities, kingdoms, nations, the "Dry Steppes" of the nomads, and the "Paynim Kingdom".  Great Nobles, (Earl and above) of the GK, as well as members who attain independence with fiefs of full kingdoms or nations, will take part in service to the King in his wars, fight each other, or rebel against their liege, and that includes vassals created by any sovereign.  Exact method of play is yet to be determined, but before any final decision is reached we will publish the map and general rules for vote by the full peerage.  Rick Crane suggests that the game be strategic to allow for full PBM, and we agree.  We also think any elevation to nobility above the rank of Viscount should be contingent upon the candidate's full agreement to become involved in the game.

For those interested, the page from Domesday Book #9, describing rules for the proposed game, was reproduced in Jon Peterson's blog, here.

Years later, in describing the OD&D campaign setting, Gygax would state "The game world is a parallel earth, but the continents are somewhat different.  Most of our campaign activity takes place on what corresponds to North America, on the eastern half of the continent.  The "Blackmoor" lands lie far up on the northeast coast.  "Greyhawk" is in the central portion."  (From Alarums & Excursions #15, October, 1976).

Early tournament modules, including the original versions of "Tomb of Horrors" (Origins I, July 1975), "Expedition to the Barrier Peaks" (Origins II, July 1976), and "Lost Caverns of Tsojconth" (Wintercon V, Nov/Dec 1976) were ostensibly set in this game world.

at October 19, 2019
Email ThisBlogThis!Share to TwitterShare to FacebookShare to Pinterest
Labels: The OD&D Game World