The Battle of Brown Hills

With the publication of Chainmail in March, 1971 the Lake Geneva Tactical Studies Association (LGTSA) began using Gygax and Perren's rules to run fantasy scenarios.  One such was The Battle of Brown Hills, which Gygax submitted as a battle report to Wargamer's Newsletter.

The article was published in issue #116 (November, 1971), eliciting scorn from traditional wargamers.  Nevertheless, the popularity of the Chainmail fantasy supplement grew, adopted by gamers like Dave Arneson in the Twin Cities.

Gygax opens his report with "Having run across an old map I had drawn of a mythical continent, complete with many fantastic inhabitants, I decided to use it as the basis for a game."  Apart from a familiar place name or two, the setting appears distinct, predating that of the Great Kingdom.

The forces of Chaos hail from the peninsula of Lands End, north of the Giant Mountains.  They covet the fertile Meadowlands, under the protection of the remnants of the Old Kingdom, ruled from its capital at Great Keep.  The forces of Law are aided by horsemen from the east.

At Gary Con XI, this past March, my son was able to take part in "The Battle of Brown Hills", on the sand table in the Legends of Wargaming room.  It ended up being his favorite experience of the Con.  I've posted a few pictures, below: 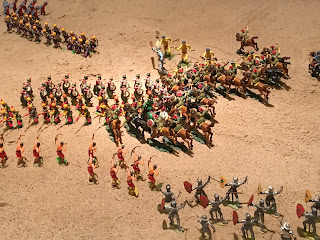 The Horde of Chaos and the army of Law collide! 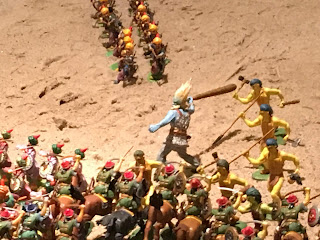 Verdurmir, the Giant King, leads the Ogres of Iuz into battle. 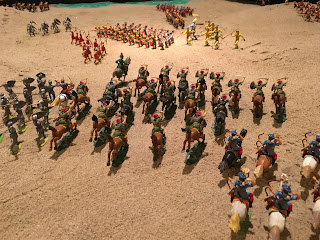 The Count Aerll surveys the engagement from above.


Gygax submitted a follow-up article entitled "Fantasy Battles" to Wargamer's Newsletter.  It was published in issue #127 (October, 1972) and described how he modified dimestore plastic figures to create fantasy miniatures (a few of which ended up in the 1e Monster Manual): 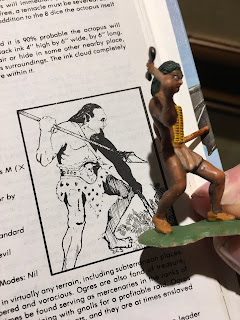 Trolls and ogres are 54mm. I located some inexpensive plastic Indians in this scale, and a bit of conversion has produced sufficient numbers of black, grey, green and purple creatures of this ilk. 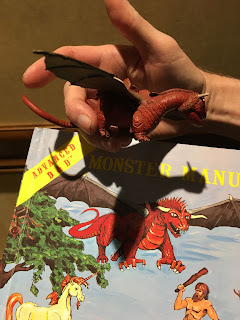 There are two dragons in our force of fantasy figures. One I made stegosaurus: First, the head was enlarged with auto body putty, a wire was inserted into the tail and puttied to make it longer – and barbed, the spikes of the tail were clipped off and added as horns to the head end, cardboard bat wings were puttied into place, and finally the entire affair was given many coats of paint, gilding and glitter (as sparkling gems on its belly). 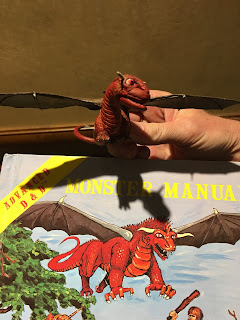 Quotes taken from "Fantasy Battles" by Gary Gygax, published in Wargarmer's Newsletter #127 (October, 1972).  Illustrations by David Sutherland, from the AD&D 1e Monster Manual.  Special thanks to the venerable Kevin Maurice for enlightening me!

Email ThisBlogThis!Share to TwitterShare to FacebookShare to Pinterest
Labels: Chainmail