The Castle and Crusade Society

ONCE UPON A TIME, long, long ago there was a little group known as the Castle and Crusade Society.  Their fantasy rules were published, and to this writer's knowledge, brought about much of the current interest in fantasy wargaming.

So begins the forward to Men & Magic, volume 1 of the original Dungeons & Dragons rules, published in 1974.  The fantasy rules referenced are the Chainmail rules for medieval miniatures, by Gary Gygax and Jeff Perren.  The writer in question was of course, Gary Gygax.

The Castle and Crusade Society was a medieval period interest group within the International Federation of Wargamers (IFW).  The IFW hosted the first Gen Con back in 1968, where Gygax played The Siege of Bodenburg, a medieval miniatures wargame.

Inspired by the setting, Gygax, together with Rob Kuntz, founded the Castle and Crusade Society, starting a newsletter called the Domesday Book in 1970.  The covers and summaries of the contents for each issue are available over at The Acaeum.

Much information about the Castle and Crusade Society and its newsletter has come to light in recent years, thanks in large part to Jon Peterson's history of role-playing games Playing at the World (2012).  Peterson blogged about Domesday Book #1, here.

Gygax met Dave Arneson, the future co-creator of Dungeons & Dragons, at Gen Con II.  Arneson became a member of the Castle and Crusade Society in time to receive issue #3 of the Domesday Book.  An early version of the Chainmail rules appear in issue #5. 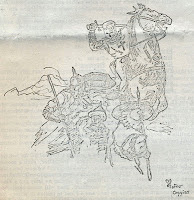 Artwork from Domesday Book #5 based on an earlier illustration by Jack Coggins from his book The Fighting Man (1966).


Domesday Book #6 describes a mythical "Great Kingdom" as the setting for a strategic game of feudal warfare.  A map of the continent was published in issue #9, eventually serving as the basis for the first D&D campaign "world", (discussed in a subsequent post, here). 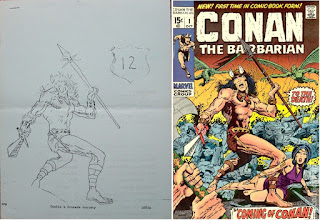 Domesday Book issues #10-14 feature cover illustrations that were likely "swiped" from other sources.  Issue #12 (above) was instantly recognizable to me, but I'm not sure about the others.  Have a look for yourself, (here), and let me know what you think.


at October 12, 2019
Email ThisBlogThis!Share to TwitterShare to FacebookShare to Pinterest
Labels: Chainmail