Rules for an alchemist sub-class were published in The Dragon #2 (August, 1976), combining aspects of clerics, fighters, magic-users, and thieves.  Alignment is neutral. 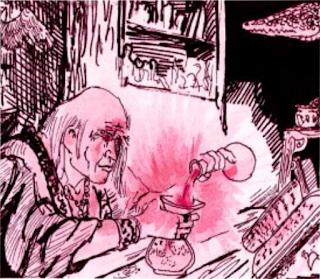 The Alchemist, from The Dragon #2 (August, 1976)
Hit dice and attack ranks are as per clerics, and their prime requisite is wisdom, although both intelligence and wisdom scores must exceed 12.
Armor is limited to AC 5, although any one-handed weapon is usable, and saving throws are as per fighters (with +2 against poison and non-magical paralyzation).
Alchemists possess 4 special abilities (detect poison, neutralize poison, neutralize paralyzation, and identify potion) which advance with a percentile chance of success, as per thief abilities.
Starting at level 1, they can also read languages (80%) and have the ability to prepare a potion of delusion, as well as poisons and drugs.
Starting at level 3, alchemists can prepare other potions (organized into 6 levels, similar to magic-user spells), with an increasing number possible.
Many of the potions are drawn from the OD&D tables, but some interesting new ones are included, such as Tanglefoot Pills (level 1):

Small synthetic fungoid which rapidly expands to fill a 10’ X 10’ area with rubbery tentacles. Men require 3 turns to force their way through, a giant takes one. The tendrils dissipate harmlessly in one hour.

Additional abilities are gained with level advancement (ability to prepare acids at level 3, "blade venom" at level 5, read scrolls as per thieves at level 7, and potions from samples at level 9).
Some new, class-specific, magic items are described, such as the Grimoire of Archaic Alchemy and the Philosopher's Stone.
Finally, there is a section on poison, including a description of Blade Venom:

This special poison for application to cutting weapons costs 200GP and 1 week to prepare. The victim struck must save vs. poison or die in 3 rounds. The venom is kept in vials which contain enough for three hits with a blade or three arrows.It loses potency rapidly, becoming useless 24 hours after the vial is opened.