The D&D Tournament at Gen Con IX in August, 1976 was run by Bob Blake.  Both rounds were published by Judges Guild as JG #55 "Gen Con IX Dungeons" (1978) with illustrations by Sheryl England, and reprinted in 1980 with a new cover by Kevin Siembieda. 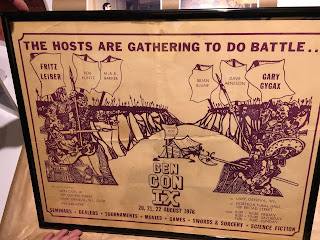 The tournament was first announced in the Gen Con Update in The Strategic Review #7:

Bob Blake, Rt. 1 Box 47, Valparaiso, IN 46383, needs DMs to help run a mammoth D&D tournament, that will span all three days of the con. The end result, after three days of dungeoneering, with the same characters, will be a champion Mage, Fighter, Cleric, Elf and Dwarf. Each participant will run a predetermined character, and all participants will be judged on performance, with eliminations. Sounds really interesting to hear Bob tell it. Get the full lowdown from him if you are interested in being a DM.

Additional details were provided in the Gen Con Update in The Dragon #2, including a shortened version of the scenario to be used in the preliminary round:

. . . The group of adventurers in question has offended the resident Wizard of the town in which they reside, having referred to him as a ‘shriveled old nit.’ He is about to end their miserable existences with a well-placed fireball, but stops short of uttering the final words of the incantation. Eyeing them speculatively, he offers them a chance to redeem themselves. He tells them a tale of a highly magical staff that once belonged to him, but was stolen a few ages ago. He now believes it is in the dungeons of a nearby ruin, and says that if they find it and bring it back to him he may just see them in a different light, so to speak. The party is ecstatic, relatively, at the opportunity to save their skins, and readily agree to the adventure, thinking that they will be able to line their own pockets as well as retrieve the old fool’s bit of magic kindling. As they neglect to ask him why he doesn’t go with them, or why he hasn’t recovered this bit of magic aforenow, he does not volunteer the information. Before sending them off, he takes the Mage aside and tells him they should begin their search off the Sixth Stairway, at the same time covertly slipping a curiously carved piece of amber into the Mage’s hand...

According to Jon Peterson "The tournament seems to have proceeded more or less as planned, although given excessive crowding, at Gygax's direction they relocated the event from the Horticultural Hall to the lawn behind the Legion Hall." (from "Playing at the World").
The preliminary round was "Baldemar Castle and the Staff of Albalon" (character levels 6-7) and the final round was "Temple of Diklah and the Helm of Valasdum" (character levels 8-10), with a tenuous link between the two scenarios.
Jon Pickens, contributor of the Alchemist class in The Dragon #2 and the Berserker subclass in The Dragon #3, was one of the tournament DMs.  His behind-the-scenes report was published in Alarums and Excursions #19 (as discussed in Peterson's "Playing at the World").
Update (Apr 11, 2021): Harold Johnson relates his experience participating in the Gen Con IX tournament in an interview on the GROGTALK podcast (episode 74, starting at about 18:00)
I've run both parts of this adventure, and posted a review on Dragonsfoot, back in 2016.  The preliminary round was fairly routine, although the final round was more challenging, and would be well suited for a session at Gary Con or some other old school con.
Names of the winning players were printed in an article by Bob Blake in The Dragon #3, in which he responded to some criticisms about how the tournament was run.  Allen Hammack was the champion mage, (and has promised to tell me all about it, some day!)
Blake's campaign world is "roughly similar to Celtic mythos" and could be used in place of Gaul, in the OD&D game world.  It would be interesting to learn more about the Valparaiso Society, Blake's gaming group, as they represent a significant early nucleus of gamers.
at July 25, 2020

Email ThisBlogThis!Share to TwitterShare to FacebookShare to Pinterest
Labels: The OD&D Game World